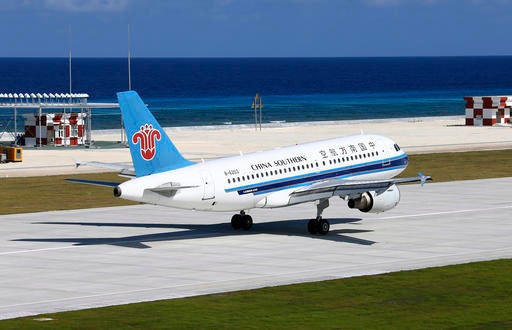 In this Jan. 6, 2016 photo released by China’s Xinhua News Agency, a China Southern Airlines jetliner lands at the airfield on Fiery Cross Reef, known as Yongshu Reef in Chinese, in the Spratly Islands, known as Nansha Islands in Chinese, of the South China Sea.  (Cha Chunming/Xinhua via AP, File)

BEIJING — China accused the Philippines Wednesday of ignoring requests for dialogue about their maritime dispute, as tensions rise before an international tribunal’s ruling on the territorial row.

The Philippines has “unilaterally closed the door of settling the South China Sea issue with China through negotiation,” China’s foreign ministry said in a lengthy statement published by the official Xinhua news agency.

The statement came a day after the end of an annual meeting between the US and China in Beijing, at which the two countries failed to make progress on the issue.

China asserts ownership over nearly all of the sea despite competing claims by several of its Southeast Asian neighbours, and has rapidly built artificial islands suitable for military use.

Manila accuses China of effectively taking control of Scarborough Shoal, one of the contested areas, in 2012 and has brought a case against Beijing to the Permanent Court of Arbitration at The Hague.

China has shunned the proceedings and said it will not recognise any ruling.

In the statement, the foreign ministry said that in 1995 Beijing and Manila agreed to settle disputes through talks and negotiation. It accused the Philippines of ignoring proposals to create a consultation mechanism on disputes at sea.

The ministry did not specify how such consultations would be different from the numerous exchanges the countries have had on the issue.

It blamed Manila for the dramatic worsening in the two countries’ relations and in the peace and stability of the South China Sea.

The Philippines, Brunei, Malaysia and Vietnam have competing claims to China, and object to its island-building.

During the two-day meeting that ended Tuesday, US Secretary of State John Kerry urged China to settle its territorial rows peacefully based on the “rule of law.”

But Beijing’s top diplomat Yang Jiechi said the US should butt out of disputes that were a long way from its shores, including the international arbitration case brought by the Philippines.

China’s stance on the case is “in line with international law,” Yang said, insisting that his country’s position “has not and will not change.”

Read Next
Abu Sayyaf frees 4 Malaysian sailors; payment of ransom unconfirmed
EDITORS' PICK
A laptop that maximizes your WiFi so you can maximize your productivity
Why Tagle is a leading papal contender
In Borongan, nuns play hoops (not mahjong)
Powered by style, innovation and passion
House energy committee chair Arroyo bats for cheap electricity
KWF has no power to ban, censor written works – Lagman
MOST READ
Why Tagle is a leading papal contender
Arjo Atayde reveals proposal to Maine Mendoza was ‘more than a year’ in the making
My neighbor FVR: From soldier to president
Gilas gets solid core with Clarkson, Sotto planing in
Don't miss out on the latest news and information.