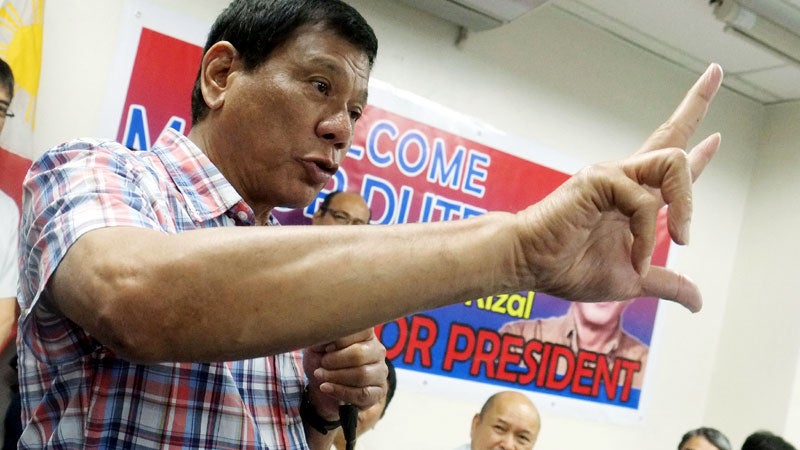 THE UNITED States is “watching very carefully” the moves of  President-elect  Rodrigo Duterte, particularly during his first 100 days in Malacañang, and his reaction to the much-awaited ruling of a United Nations tribunal court on the Philippines’ maritime row with China, according to an expert of a US-based think tank.

“It is ironic that we are watching because if you ask leaders in Washington right now, they would say the US-Philippine relationship is at a high point,” said Ernest Bower, a nonresident senior adviser for the Southeast Asia Program at the Center for Strategic and International Studies.

In an interview with the Inquirer on Monday, Bower said the long-standing relations between the Philippines and the United States were even made stronger during the Aquino administration.

“And the defense relationship is at least at a two-decade high,” he said.

No less than President Aquino and US President Barack Obama visited each other’s countries twice, he noted.

“There is no reason to believe that a new leader of the Philippines would sacrifice all those good things to move into a direction that would put the Philippines in a less secure and less economically prosperous position,” he said.

Until Duterte officially assumes the presidency on June 30, it is a wait-and-see period for everyone else, Bower said.

“He’s been a mayor and he has said things in the campaign that gave people cause to watch. But again I really think all we can do is wait and see who he puts on his team and wait what he does,” he said.

Bower was among the speakers at a symposium on “Asia-Pacific Perspectives on Implementing the Enhanced Defense Cooperation Agreement (Edca),” which was held at National Defense College of the Philippines at Camp Aguinaldo in Quezon City on Tuesday.

The Edca is widely seen as important for the United States and the Philippines, a staunch ally, as both nations are worried by China’s increasingly assertive pursuit of territorial claims in the disputed South China Sea.

Signed days before Obama visited Manila in 2014, the security deal will allow US troops to build facilities to store equipment for maritime security and humanitarian and disaster response operations, in addition to giving broad access to Philippine military bases. The Supreme Court upheld the constitutionality of Edca in January this year.

Bower said the United States was not looking at Duterte’s unorthodox statements, such as taking a Jet Ski to one of the contested islands in the Spratlys or his threat to cut ties with Washington, which, he added, were part of campaign rhetoric during the recent elections.

On Monday, the American expert gave a lecture on US policy and perspectives on the developments in the South China Sea at the University of the Philippines.

The Philippines is awaiting a ruling of the UN arbitral court this month on a case it filed last year, questioning the legality of China’s “nine-dash line” claim over the South China Sea under the United Nations Convention on the Law of the Sea.

That Duterte is seemingly warming up to China does not bother Bower.

“I think the proof is really in the pudding. In other words, what we are watching is who he selects to be in his Cabinet. What his first 100 days would look like, what actions he takes particularly around things like the response to the arbitral case in The Hague,” Bower said.

“Those are things that will tell the story. I don’t put too much stock in the things that he said recently,” he added.

Duterte has appointed Perfecto Yasay, a lawyer and former chair of the Securities and Exchange Commission with no background in foreign policy and diplomacy, as acting foreign secretary for one year until Sen. Alan Peter Cayetano takes over.

The law prohibits the incoming President from immediately appointing Cayetano, his running mate, who lost heavily to Leni Robredo in the May 9 elections.

Retired Maj. Gen. Delfin Lorenzana’s designation as the next defense chief is considered to be a silver lining in what is apparently a shallow bench in the security cluster of the Duterte Cabinet. Lorenzana served as a defense attaché to Washington.