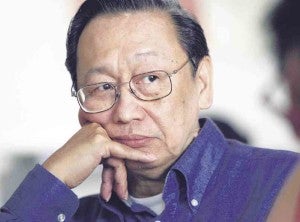 DAVAO CITY — The prospects of Communist Party of the Philippines (CPP) founder Jose Maria Sison coming home to the country have dimmed with the recent statement by the US naming the Communist New People’s Army (NPA) in its terrorist list.

“US has again come up with a statement naming the NPA in the terror list. This poses a problem,” Agcaoili said.

There’s no direct flight between Holland and Manila, so, US can effect an arrest in between transit points, according to Agcaoili.

“If Professor Sison would have to come home, kung KLM flight iyan (if it’s a KLM) he has to pass by Taipei.  Kung mag-intercede ang US through its control of the Interpol (International police) [If the US intercedes through its control of the Interpol], then, they might present a warrant of arrest against him in Taipei, so, everything is kaput,” Agcaoili said. “It’s an issue that should be discussed seriously.”

“What if he’ll be taken in Taipei and brought straight to Guantanamo?” he asked, adding this would adversely affect the peace talks being revived by the new government under President-elect Rodrigo Duterte and the NDFP leadership.

Agcaoili, who had talked for the third time with Duterte since the latter won the presidency, said they would like to get a guarantee from the Dutch government, the Norwegian government and even the US government itself that they would respect the sovereignty of the Filipino people and “our desire to pursue a just and lasting peace by allowing Sison to come home.”

“But I don’t know if the US will agree to that, it has always been a bullying agent,” Agcaoili said.

The prospect of Sison coming home under the Duterte presidency was brought out by Duterte himself at the height of the presidential campaign. Duterte, who packaged himself as a candidate friendly with the Left but who also had the clout in the police and the military, said he was once a student of Sison at the Lyceum and that he was once a member of the Kabataang Makabayan, a youth grouo that went underground during Martial Law.  SFM