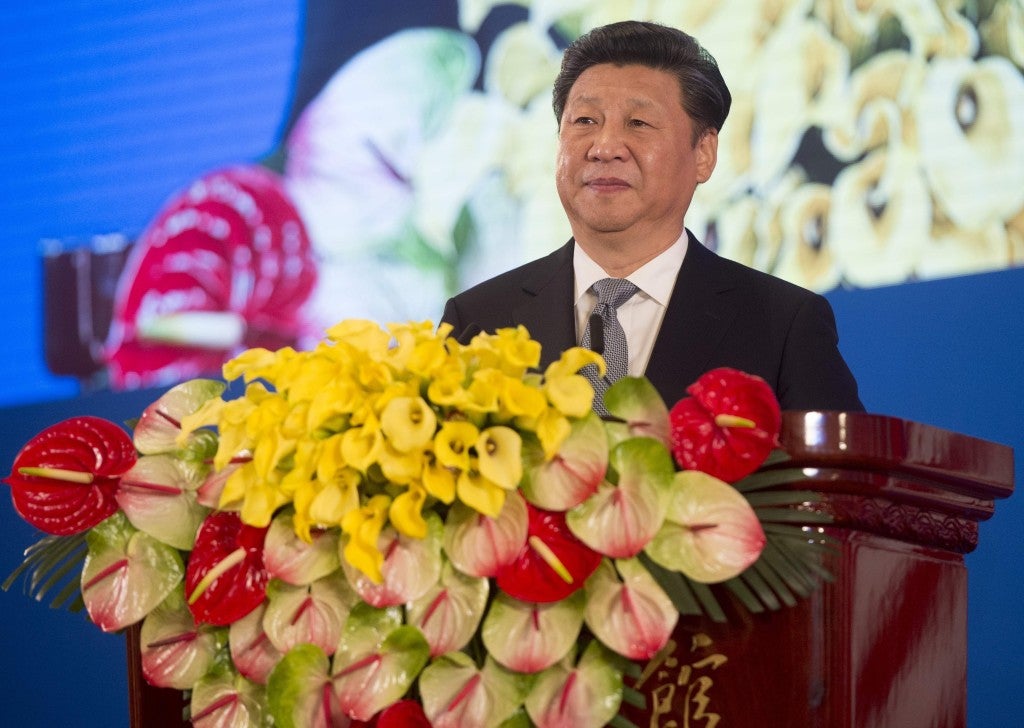 Chinese President Xi Jingping speaks during the opening session of the US – China Strategic and Economic Dialogues at Diaoyutai State Guesthouse in Beijing on June 6, 2016. AFP

BEIJING—President Xi Jinping on Monday said China and the United States needed to trust each other more as both sides sought to minimize tensions over the South China Sea at the opening key annual talks in Beijing.

China claims nearly all of the strategically vital sea despite competing claims by several Southeast Asian neighbors, and Beijing has rapidly built artificial islands suitable for military use.

“China and the US need to increase mutual trust,” Xi said at the opening of the annual strategic dialogue, calling for redoubling of efforts for the two powers to manage conflicts and avoid “strategic misjudgement.”

“Some disputes may not be resolved for the time being,” he said, but both sides should take a “pragmatic and constructive” attitude toward those issues.

“The vast Pacific should be a stage for cooperation, not an area for competition,” he added.

Speaking for the United States, US Secretary of State John Kerry called for a “diplomatic solution” to the problem.

“We are looking for a peaceful resolution to the dispute in the South China Sea and oppose any country resolving claims through unilateral action,” Kerry said, referring to China’s increasingly aggressive expansion in the area.

The Philippines, Brunei, Malaysia and Vietnam have competing claims in the South China Sea, which encompasses vital global shipping routes and is believed to have significant oil and gas deposits.

The Philippines accuses China of taking effective control of Panatag Shoal (Scarborough Shoal) in 2012 and has brought a case against Beijing to the Permanent Court of Arbitration at The Hague. China has shunned the proceedings and says it will not recognize any ruling.

The Beijing talks follow an Asian security summit at the weekend where US Defense Secretary Ashton Carter warned that Chinese construction on the shoal would prompt unspecified “actions” by the United States and other nations.

Following Carter’s comments at the Singapore meeting, Chinese Adm. Sun Jianguo said the issue had become “overheated” and said China did not fear “trouble” over its territorial disputes.

Tensions mounted after the South China Morning Post reported last week Beijing could establish an air defense identification zone (Adiz) over the sea—which would require civilian aircraft to identify themselves to military controllers.

Such a move would be considered “a provocative and destabilizing act,” Kerry said on a trip to Mongolia on Sunday.

The Beijing dialogue is perhaps the most important meeting between the world’s two largest economic and military powers, giving them a chance to seek agreement and iron out disputes on a range of issues related to security and economics.

Both the United States and China promote the event, known as the Strategic and Economic Dialogue, as an opportunity to move forward issues, such as global warming, where they find easier agreement.

But the discussions are often defined by points of conflict, with increasing tensions in the South China Sea promising to overshadow this year’s efforts to focus on the positive.

The meeting is the eighth of its kind and is set to cover a number of key issues beyond the South China Sea, including climate change, cybersecurity, terrorism, trade and economic cooperation.

Among those is the question of how to handle North Korea’s nuclear ambitions, an area where Kerry said it was “imperative to keep the pressure.”

The North staged its fourth atomic test in January and launched a long-range rocket a month later—widely seen as a ballistic missile test, banned under existing UN resolutions.

Beijing is Pyongyang’s largest trading partner and has been its key diplomatic protector for decades. It is seen as a critical element in any plan to convince North Korea to change its behavior.

China has seemingly lost patience with North Korea’s behavior, and Beijing played a critical role in pushing a recent round of sanctions against Pyongyang through the United Nations. AFP