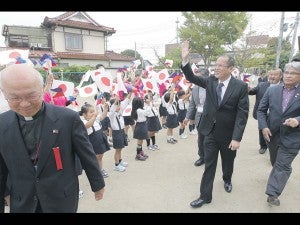 KINDER GREETING President Aquino gets a warm welcome upon his arrival at Ishinomaki Kindergarten for a meeting with the Filipino community in line with his working visit to Japan. MALACAÑANG PHOTO

TOKYO—President Benigno Aquino III will seek the support of Prime Minister Yoshihiko Noda on Tuesday in a bid to resolve conflicting claims over the Spratlys that have provoked concern in Japan over freedom of navigation in a vital sea lane, officials said.

The issue will be among the key topics that Mr. Aquino, who is here on a four-day visit, will discuss with Noda, who took power earlier this month, in their one-on-one meeting at his official residence, the Kantei, at 6 p.m.

The two leaders will then sign a joint statement and address the media an hour later.

China has maintained that it will discuss the dispute only in separate bilateral engagements with other countries, including the Philippines, that claim the Spratly Islands either in part or as a whole.

“There is mutual interest in terms of freedom of navigation. I think it’s in that context that there would be any discussion on the West Philippine Sea,” Del Rosario told the Inquirer.

Told about China’s preferred framework of negotiations, the foreign secretary said: “I think we have to deal with this problem in terms of promoting our national interest.”

Roxas maintained that the Philippines preferred that the issue be resolved peacefully and multilaterally.

“The position of our country is that there are many claimants. It can’t be that only two countries would talk about it,” he told reporters in Filipino.

Roxas said Japan’s main concern was “free passage,” noting that ships delivering imported oil from the Middle East pass through the area on their way to Japan.

“They are interested in the outcome of the negotiation on the West Philippine Sea,” he said. “That’s one of the topics that will be discussed, free maritime passage in the open seas.”

Prior to meeting with Noda, who will also host a dinner for Mr. Aquino Tuesday night, the President will meet separately with top Japanese business leaders.

Not shopping for ally

Mr. Aquino is looking forward to bringing home a private investment package worth $1.1 billion, officials said. They said he was also expecting a 9-billion-yen loan from a global facility put up by Japan for disaster preparedness.

In Manila, presidential spokesperson Edwin Lacierda said Tokyo’s interest in freedom of movement in the vital waterway should not provoke Beijing.

“We do not think so,” Lacierda said when asked if Japan’s interest would provoke China.

The Philippines and Japan are reportedly set to sign a military cooperation agreement Tuesday, but Malacañang could not confirm the report carried by the influential Japanese newspaper Nikkei.

“No,” Lacierda said when asked if the government was “shopping” for an ally. “We are merely stating that the West Philippine Sea remains open for navigation.”

Earlier this year, the Philippines and Vietnam protested China’s alleged incursions into areas that they believed were part of their territories and interventions in their explorations for oil and minerals.

The Spratlys, believed to be atop vast oil and gas reserves, and the Paracels are claimed in part or entirely by China, the Philippines, Vietnam, Malaysia, Brunei and Taiwan.

In a recent forum, Aileen Baviera, an Asian studies professor at the University of the Philippines, observed that a competition for maritime influence among the “big powers” was being played out in the Spratlys.

“Security affects all of us. The balance of power is shifting in the region with the rise of China and the decline of the US in terms of its political and economic influence in our part of the world. This in itself is raising concerns, worries,” Baviera said.