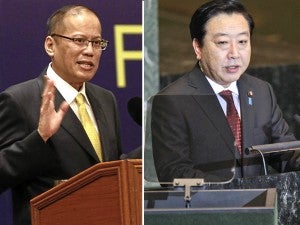 Mr. Aquino will have one-on-one discussions on Tuesday with Japanese Prime Minister Yoshihiko Noda, who came to power earlier this month, and meetings with representatives of Japan’s biggest companies.

Communications Secretary Herminio Coloma, in a statement to Agence France-Presse (AFP), quoted the President as saying that the conflict over the Spratlys in the West Philippine Sea, which Beijing calls the South China Sea, should also concern Tokyo.

Coloma said that just like the United States, “Japan is also a stakeholder in the quest for peace and stability” in the disputed region, according to AFP.

Japan’s Nikkei newspaper on Sunday reported that Tokyo and Manila would step up their maritime security ties and sign a military cooperation agreement when Mr. Aquino and Noda meet.

In remarks before his departure from Manila, the President said the talks with the Japanese leader would “outline the direction we would both work on toward the development of our respective societies.”

“I am excited about the upcoming discussion, the exchange of ideas, and we are hoping that this would lead to the signing of agreements.”

The West Philippine Sea is the main corridor for the shipment of 88 percent of oil imported by Japan from the Middle East, according to the Japanese Embassy in Manila.

“Japan is also very concerned about it as the freedom of navigation may affect also the Japanese vessels plying (the area),” said Philippine Ambassador to Japan Manuel Lopez.

Lopez said another important item in the Aquino-Noda talks would be the upcoming review of the three-year Japan-Philippines Economic Partnership Agreement (Jpepa).

The agreement has been criticized over fears that it will pave the way for the dumping of Japan’s toxic wastes in the Philippines.

Another concern was the supposed unfair treatment of Filipino nurses, who had to first work as “candidate nurses” until they passed a licensure examination given in the Japanese language. A Filipino lawmaker feared this could lead to “exploitation” of the nurses.

Lopez said the Jpepa review later this year would “pave the way for more of our nurses and caregivers coming to Japan.” He said the Philippine would also propose the inclusion of Filipino English teachers in the recruitment.

Accompanied by a 63-strong delegation, Mr. Aquino arrived at Haneda Airport on board Philippine Airlines Flight  PR 001 at around 2:30 p.m. First on his agenda was a meeting with the Filipino community at Japan Education Center later in the afternoon.

Mr. Aquino said in Manila that his fourth foreign trip in two months would show “proof of the growing confidence of other countries in the Philippines.”

He previously visited China and the United States. He was in Tokyo in August for a secret meeting with Murad Ebrahim, chair of the secessionist Moro Islamic Liberation Front.

“These are the goals of our visit—to let the light of change our country is enjoying now shine forth in the world, to introduce a Philippines on the straight path of governance, a Philippines that is open and with a level playing field for business,” the President said.

Mr. Aquino will sit down with business leaders, including representatives of Toyota Motor Corp., Terumo Corp., Marubeni Corp. and Tokyo-Mitsubishi, before meeting with Noda at the Kantei, the prime minister’s official residence.

His trip’s success will be measured heavily in the amount and quality of Japanese investment he would bring home. Trade officials earlier estimated the investment package from Japan at $1.1 billion.

Lopez said the fresh investments would include the construction of a five-star Grand Hyatt Hotel in The Fort in Taguig City and the hiring of Filipino workers to work on “prefabricated homes” in disaster-hit areas in Japan.

Mr. Aquino said he was also looking forward to his “personal call” on Emperor Akihito, who invited his mother, the late President Corazon C. Aquino, to his enthronement in 1990, as well as his meeting with the Filipino community.

The emperor will host a state luncheon for the President at the Imperial Palace on Wednesday.

“We express our immense gratitude to the dear emperor for his invitation and for the opportunity to continue the good relations, which we have established with his country,” Mr. Aquino said.

Lopez also said the President’s meeting with Noda would “touch on disaster management because Japan is quite experienced already.”

He said the Japanese side could tackle its venture into nuclear technology, while the Philippines could share its experiences with typhoons and the accompanying floods.

Japan had to reassess its nuclear power plants after a huge earthquake and tsunami damaged its Fukushima Daiichi facility in March.

On the second anniversary of Tropical Storm “Ondoy” today (Monday), the President will take the bullet train to the Tohoku region to visit tsunami victims in Ishinomaki City and the coastal area of Kadonowaki.

“We will send our heartfelt sympathies to the families of those affected by the earthquake and tsunami,” he said, noting that Japan was among the first countries to aid the Philippines in times of calamities.

“Now, they are the ones in need so we will not hesitate to assist them so they could get back on their feet the best way we can,” he said. “We will take this opportunity to return the favor for their good treatment of Filipinos.”

Lopez said the President would hand over a donation to the Mayor of Ishinomaki for the reconstruction of city hall.

He said he would recommend that the Philippines send more doctors, including psychologists, to assist victims, many of whom were Filipinos. He said the Philippines had previously sent relief goods right after the earthquake.

“Ishinomaki was one of the most devastated places during the last earthquake and tsunami so I think it is only fitting that the Philippines play a role in the reconstruction of that area,” he said.