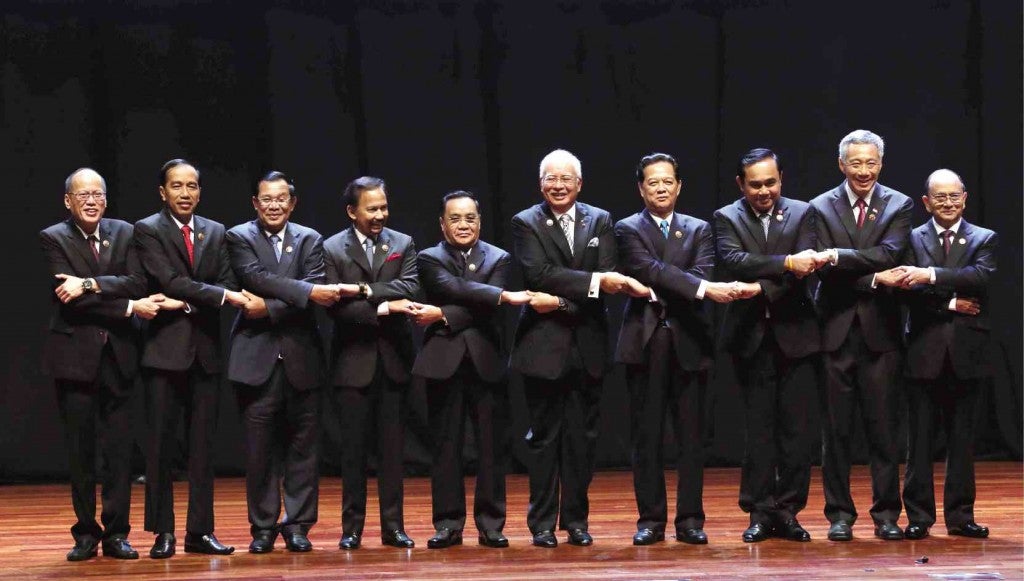 Mr. Aquino, who steps down in June next year, called on the nine other leaders of Asean not to allow China to “use force or threat” to assert its claim to nearly all of the South China Sea in violation of international law.

In statements at all meetings during the Asean summit and in dialogues between the bloc and its partners China, Japan, South Korea, the United States and India, Mr. Aquino called attention to rising tensions in the region over Beijing’s massive land reclamation in the Spratly archipelago to build artificial islands on reefs from which it could project its growing military power.

Mr. Aquino reserved his strongest words in his address to fellow leaders of the 10-member Asean, which remains divided over the South China Sea dispute.

“As a rules-based community, Asean should not allow any country, no matter how powerful, to claim an entire sea as its own and to use force or the threat thereof in asserting such a claim,” Mr. Aquino said.

“Our collective prosperity requires stability in the region,” he added.

“This has come under threat by unilateral actions such as the massive reclamation and building of structures on features in the Spratly islands, which have urgent and far-reaching implications to the region and the international community,” Mr. Aquino said.

China claims nearly all of the 3.5-million-square-kilometer South China Sea, including waters near the shores of its smaller neighbors in the region.

Four Asean members—the Philippines, Brunei, Malaysia and Vietnam—as well as Taiwan have overlapping claims in the sea crisscrossed by sea-lanes where $5 trillion in global trade passes every year and where islets, reefs and atolls are believed to be sitting atop vast oil and natural gas reserves.

Of the four Asean claimants, the Philippines and Vietnam are the most engaged, with Hanoi fighting naval battles with Beijing at Fiery Cross Reef in 1988 and Manila, without military muscle, taking its dispute with Beijing to the United Nations Permanent Court of Arbitration in The Hague for resolution.

China has refused to take part in the arbitration, saying it will not accept any decision by the tribunal.

The court will hear oral arguments on the Philippine case from Nov. 24 to 30 despite China’s absence.

President Aquino told his fellow Asean leaders that the Philippines would pursue the arbitration case to its conclusion.

The Philippines has asked the tribunal to invalidate China’s claim to nearly all of the South China Sea, including 80 percent of the Philippines’ 370-kilometer exclusive economic zone (EEZ) recognized under the United Nations Convention on the Law of the Sea (Unclos).

Mr. Aquino said the Philippines would abide by the decision of the UN arbitral court.

The tribunal is expected to hand down its decision by June next year, in time for the end of Mr. Aquino’s term.

BACKSTORY: Key points of the Arbitral Tribunal’s decision in PH vs China case

“The Philippines has always adhered to the rule of law, and our decision to resort to arbitration reflects our belief that it is a transparent, friendly, durable and peaceful dispute settlement mechanism that can bring stability to the region,” Mr. Aquino said.

“The Philippines remains committed to pursuing arbitration to its final conclusion and will abide by [the UN tribunal’s] decision,” he added.

After the plenary session, Communications Secretary Herminio Coloma Jr. told reporters that Malaysian Prime Minister Najib Razak, the current Asean chair, said there was a broad agreement on a “constructive resolution of issues pertaining to the South China Sea by adhering to international rule of law, especially Unclos, and promoting” the nonbinding 2002 Declaration on the Conduct (DOC) of Parties in the South China Sea and the conclusion of a binding code of conduct for all the claimants.

The first day of the two-day summit began at 8 a.m. and continued past 7 p.m. at the Kuala Lumpur Convention Center.

Malaysia deployed soldiers in Kuala Lumpur after terrorist attacks that killed 129 people in Paris a week ago and 27 people in Bamako, Mali, on Friday.

Roads leading to the convention center were closed as heads of state traveled from their hotels to the venue, but were opened to traffic afterward.

Stores, including those close to the summit venue, remained open.

During the afternoon sessions beginning with the Asean-China summit where leaders of the bloc met with Chinese Premier Li Keqiang, President Aquino asked China to stop land reclamation and building artificial islands in the West Philippine Sea, part of the South China Sea within the Philippines’ EEZ.

“At this point when we are trying to manage issues, does not conducting massive reclamation and building of structures in contested waters make our collective task harder? We believe it does,” Mr. Aquino said.

“None of us benefits in the long run. Therefore such actions should be stopped. This, at the very least, could return the issue to more manageable levels,” he added.

During the Asean-India summit, Mr. Aquino thanked Prime Minister Narendra Modi for India’s support for the resolution of the disputes in accordance with international law.

“We underscore the need for peaceful settlement of disputes in the sea known by many names. We are determined to see our arbitration case to its final, legally binding conclusion and likewise urge all parties to pursue the establishment of a code of conduct in the South China Sea,” Mr. Aquino said.

At the Asean-United States summit with US President Barack Obama, Mr. Aquino said the Oct. 27 US Navy patrol and last week’s B-52 bomber flight near artificial islands built by China in the Spratlys were a counterbalance “in light of recent threats to the region’s stability.”

On a potential clash between China and the United States in the South China Sea, he said Asean shared with the United States the principles of freedom of navigation and overflight, unimpeded lawful commerce and respect for the rule of law.

“We acknowledge the statements and actions of the US in support of these principles, and welcome the contributions of every responsible nation in rejecting unilateral actions that have changed the status quo and violated international law,” Mr. Aquino said.

“We likewise welcome the Chinese President’s recent statements during his visit to the US where he expressed the intention of China to not militarize the South China Sea,” he added.

According to Coloma, Obama reiterated the call he made in Manila during the Asia-Pacific Economic Cooperation (Apec) summit last week for “all claimants to halt all land reclamation activities in the South China Sea.”

Obama also acknowledged the Philippines’ decision to take its dispute with China to the UN arbitral tribunal and said the decision of the court must be respected by all concerned, Coloma said.