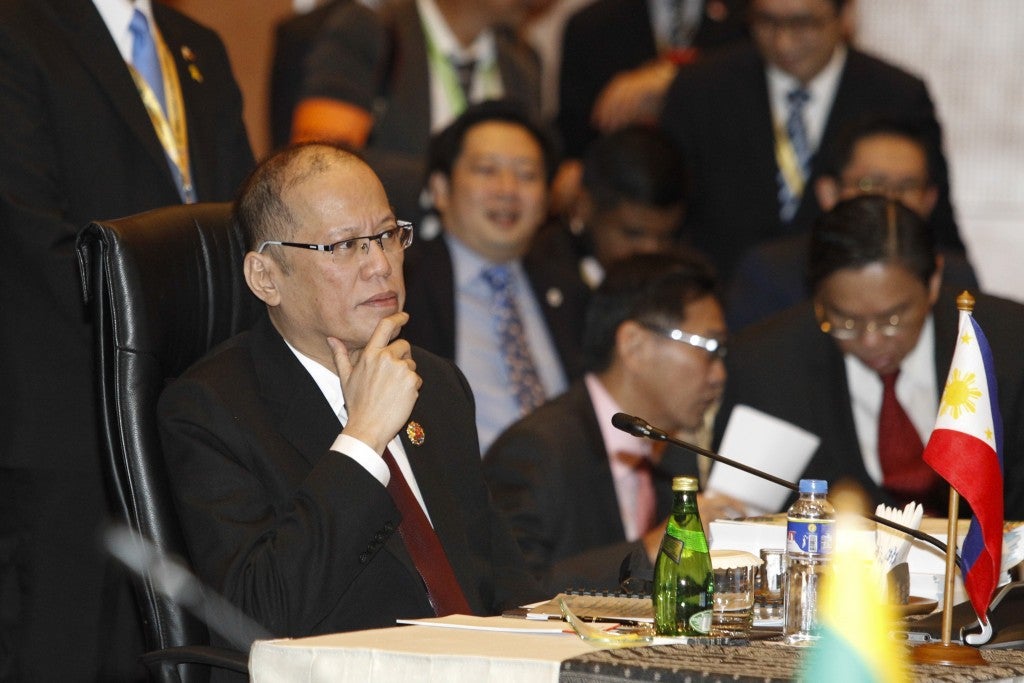 KUALA LUMPUR—President Benigno Aquino III may have avoided the issue on the South China Sea dispute during the recently concluded Asia-Pacific Economic Cooperation but he surely is making up for it in his meeting with Southeast Asian leaders.

As if one time is not enough, President Aquino underscored several times the competing claims between the Philippines and China in the resource-rich South China Sea on the first day of the 27th Association of Southeast Asian Nations (Asean) Summit in the Malaysian capital.

During plenary sessions on Saturday, which were attended by Asean countries as well as China, Japan and South Korea, Aquino highlighted anew the need for peaceful settlement of disputes “in the sea known by many names.”

He also reiterated that the UN Convention on the Laws of the Sea (Unclos) must be honored by all countries.

Aquino stressed this in an earlier Asean plenary session and meeting with China, which was represented by People’s Republic of China Premier Li Keqiang.

“Excellencies, our long-term goal of building an East Asian Community will only be truly realized when cooperation is matched by a steadfast commitment to maintain peace, stability, and security in the region. On this note, the Philippines reiterates the primacy of the rule of law,” said Aquino at the Asean Plus 3 meeting at the Kuala Lumpur Convention Center.

“We are determined to see our arbitration case to its final, legally-binding conclusion, and likewise urge all parties to pursue the establishment of a Code of Conduct in the South China Sea,” he said.

In his previous interventions, Aquino pushed for the speedy negotiation for a Code of Conduct on the South China Sea as this would be a “fitting symbol of the maturing relationship between Asean and China.”

“We should not wait any longer to establish the Code of Conduct and reinforce, without ambiguity or reservation, our political will with respect to the issue,” he said.

Also during Aquino’s participation in the Asean meeting with China, Japan and Korea, he raised the need for a policy on water resources management to address “a more intensified El Niño.”

“In the coming year, our scientists are anticipating the other face of climate change: A more intensified El Niño, which can dry up our reservoirs and deprive our lands of the harvests we have become accustomed to,” he said.

The President added that he also welcomed the progress in the implementation of the Asean Plus Three Emergency Rice Reserve (Apterr) Agreement which served as the main mechanism for strengthening regional food security and reducing poverty in the region.

“Apterr can likewise be extended to cover several other commodities, and we highlight the need to explore the possibility of such. We also urge the transformation of the Asean Food Security Information System (Afsis) into a permanent mechanism to strengthen food security in the region,” he said.