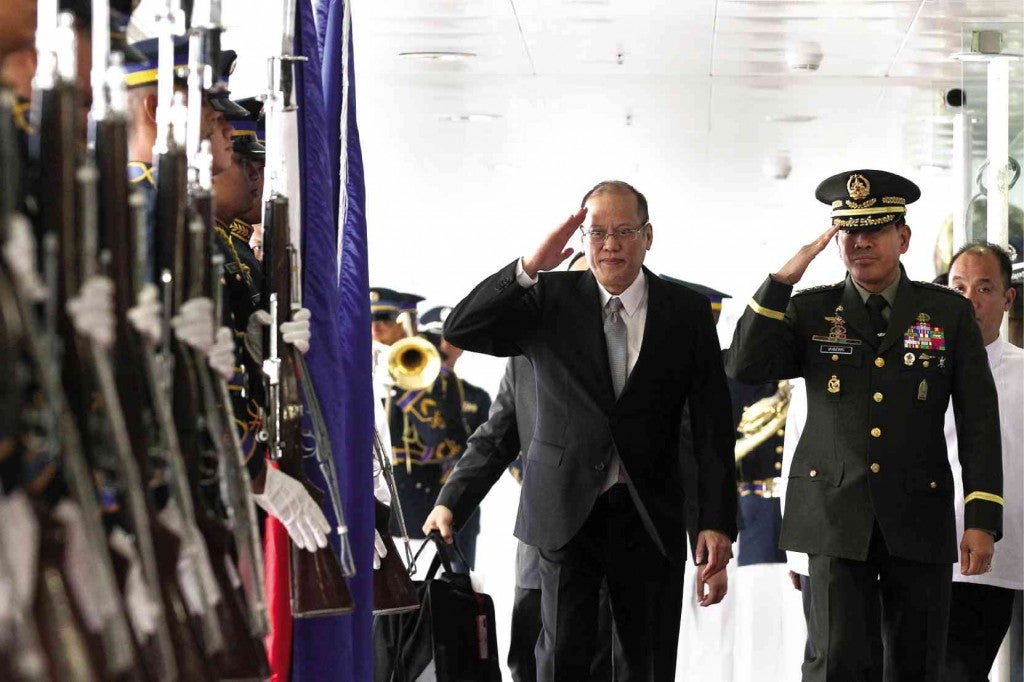 OFF TO ANOTHER SUMMIT President Aquino, accompanied by AFP Chief of Staff Gen. Hernando Iriberri, troops the line at Ninoy Aquino International Airport as he leaves for Kuala Lumpur, Malaysia, for the Association of Southeast Asian Nations summit on Friday, a day after hosting the Asia-Pacific Economic Cooperation summit. MALACAÑANG PHOTO BUREAU

KUALA LUMPUR—Owing to the Philippines’ recent legal victory in the West Philippine Sea territorial dispute with China, President Benigno Aquino III will again be in the spotlight when he attends the Association of Southeast Asian Nations (Asean) Summit for the last time.

The 27th Asean summit is the President’s last as the Philippine head of state. He will complete his six-year term on June 30, 2016.

Mr. Aquino arrived at the Malaysian capital at 7 p.m. on Friday, barely a day after he closed the Asia-Pacific Economic Cooperation gathering where leaders of the world’s biggest economic bloc agreed to adopt the antipoverty measures that the Philippines had initiated to make the growth envisioned for the region felt by all.

But just as he is expected to push for Asean action on trade, maritime and development issues at the summit, Mr. Aquino will also be saying his goodbyes to fellow Asean leaders.

“Certainly, because this is the last time I will be attending Asean as your President, I will use this opportunity to say goodbye to the heads of Southeast Asia. We will thank them for their trust and support in our journey on the straight path; for their sympathy in times of disaster; for their help especially in enhancing the security in our region; and for being our partners in pushing for a peaceful and reasonable resolution to the challenges we face,” Mr. Aquino said in his departure speech in Manila.

“I think the President will be listened to very attentively by his colleagues within Asean because with (this) recent ruling, we have in a sense already hurdled successfully the first test,” said Philippine Ambassador to Malaysia Jose Eduardo Malaya III, who welcomed the President at the Kuala Lumpur airport.

“What we are seeing now (is) there are a number of Asean countries who have turned around and have also raised their voices with respect to their concerns about what is taking place in the South China Sea and including, of course, our West Philippine Sea portion of it,” Malaya said.

“Previously, it was just us and the Vietnamese, but after the ruling was issued by the tribunal in The Hague, we have been hearing stronger statements not only by the Malaysians, the host country for this summit but also by the Indonesians.

“So, as far as we can see it from here, we’re seeing a turning around of the opinions of the Asean countries from their original skeptical view of the path that we have taken,” Malaya said.

The President will brief other Asean leaders and Asean dialogue partners on the decision last month of an international arbitration court in the Netherlands to hear the case that the Philippines had filed against China’s incursions into the country’s 200-nautical mile exclusive economic zone under the United Nations Convention on the Law of the Sea (Unclos).

The Hague-based Permanent Court of Arbitration ruled that it had jurisdiction over the case and has set hearings this month to decide on the merits of the Philippines’ arguments despite China’s boycott of the proceedings.

In almost all the Asean summits he attended, Mr. Aquino urged his fellow leaders to continue negotiating with China to have a legally binding code of conduct with the other claimants in the South China Sea even as the maritime dispute has yet to be resolved.

He is expected to do the same in Kuala Lumpur. China claims almost the entire South China Sea, where Taiwan and Asean members the Philippines, Vietnam, Brunei and Malaysia also have overlapping claims.

The President has described this month’s Asean summit as a “special one” because of the launch of the Asean Community and the laying of the foundations for Asean Vision 2025.

Mr. Aquino said these initiatives will open doors for Filipinos, giving them a chance to show their talent and worth in various arenas.

He said Asean Vision 2025 highlights the importance of planning and being forward-looking.

“This is not just for tomorrow or the next day but for the next generation. Asean Vision 2025 maps out the direction that each fellow [Asean] country would take, to ensure that no one would be left behind as we try to attain progress and so that Asean would be more known as a pillar in global discussions,” Mr. Aquino said in Filipino.

The President flies back to Manila on Monday morning.

He has promised to return with “good news for our bosses.”

“It is clear, as we strengthen our relations with other countries, the positive change that we have begun in society grows and flourishes. With your continued support for the straight path, the Filipino’s capacity will be known in the region and the rest of the world,” he said.