Obama and President Aquino met on the sidelines of the summit, and agreed that “bold steps” were needed to ease tensions that had been heightened by China’s land reclamation in the Spratly archipelago to bolster its claim to nearly the whole of the West Philippine Sea.

President Aquino said freedom of navigation and overflight in the area must be continuously ensured, consistent with international law.

The annual Apec gathering is meant to forge unity on trade issues among 21 Pacific Rim economies of 3 billion people.

But the territorial row over the strategically vital sea, as well as terrorism concerns following Friday’s deadly attacks in Paris, have dominated the buildup to this week’s meeting in Manila.

China has repeatedly insisted its rows with its Southeast Asian neighbors over the disputed waters, home to some of the world’s most important shipping routes and where islets, reefs and atolls are believed to be sitting atop vast oil and natural gas reserves, should not be on the Apec agenda.

But just hours before the two-day summit started, Obama voiced concerns over giant land reclamation works by China that have created new islands close to the Philippines.

“We agree on the need for bold steps to lower tensions, including pledging to halt further reclamation, new construction, and militarization of disputed areas,” Obama said.

On Tuesday, Obama announced more than $250 million in maritime aid to the United States’ Southeast Asian allies, including two warships for the Philippines.

China claims nearly all of the 3.5-million-square-kilometer West Philippine Sea, even waters close to the shores of its Southeast Asian neighbors.

Apec members Brunei, Malaysia, the Philippines, Vietnam and Taiwan have rival claims to parts of the sea. 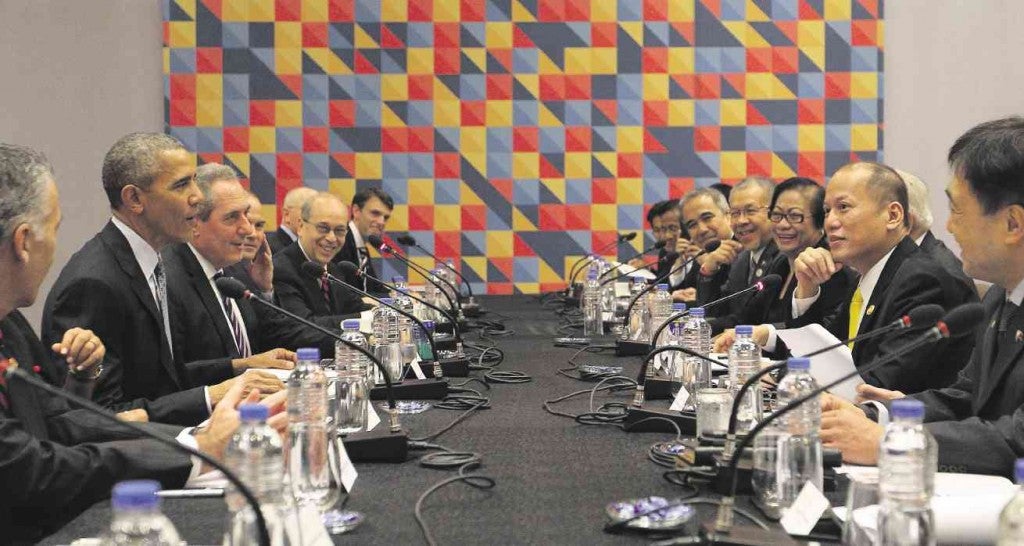 US-PH MEET US President Barack Obama and his team hold an expanded bilateral meeting with President Aquino and members of his Cabinet at Sofitel Plaza Hotel on Wednesday. MALACAÑANG PHOTO BUREAU

The United States refuses to recognize China’s expansive claims, challenging these recently with a US Navy patrol near at least one artificial island that China had built in the Spratlys and flying two B-52 bombers near the contested islands.

Chinese state media hit what it described as US meddling over the sea.

“Washington’s recent provocative moves have infringed upon Beijing’s maritime sovereignty and security in the South China Sea,” the China Daily wrote in a commentary.

“But China is not one to give in when it comes to its territorial, maritime and security interests, and the US is unlikely to succeed in its designs by instigating Asean (Association of Southeast Asian Nations) countries to challenge China’s maritime rights in the South China Sea,” it said.

Obama and President Aquino emphasized that the Enhanced Defense Cooperation Agreement (Edca), the legality of which has yet to be decided by the Supreme Court, would boost their strategies to ensure maritime security in the area

“We recognize, with the deepest appreciation, the significant contribution to our efforts by the United States’ contribution that help us ensure that we can ably respond to current security challenges, particularly in the area of maritime security and maritime domain awareness,” President Aquino said after his meeting with Obama.

Mr. Aquino said Edca would make defense cooperation between the Philippines and the United States “that much more real,” adding that the agreement would allow the Philippines access to “the most modern technology that [would give] us . . . higher capabilities.”

“That is why we welcome now with very open arms this agreement pending in our Supreme Court,” Mr. Aquino said.

He said US access to Philippine military bases would enable it to project its power in the Asia-Pacific, helping to bring order and stability and diffusing tensions in the region.

Obama reiterated the United States’ “rock-solid commitment to the defense of the Philippines,” and promised to help build up the Philippine military and establish a “more effective cooperation for defense and humanitarian work.”

“We think that the Enhanced Defense Cooperation Agreement is going to help us do that,” he said.

Still, both leaders said the disputes should be resolved peacefully.

President Aquino said he and Obama discussed how “international law should remain the framework for the behavior of all countries and for the peaceful resolution of disputes.”

The Philippines has taken its territorial dispute with China to the United Nations Permanent Court of Arbitration in The Hague for resolution, angering China, which has refused to participate and said it would not recognize any decision of the tribunal.

Mr. Aquino said other claimants had shown interest in arbitration as a way of resolving the disputes and they had indicated they were “very close to a decision whether or not to join us in arbitration.”

Obama backed the Philippines’ decision to seek UN arbitration in its dispute with China.

“Disputes need to be resolved peacefully,” he said.

China reacted angrily to Obama’s efforts to bolster US allies in the dispute, as it insisted its construction work in the South China Sea was “lawful, justified and reasonable.”

In a speech at the CEO forum of the Apec summit ahead of the leaders’ meeting, Chinese President Xi Jinping did not directly mention the territorial disputes.

But he did call on Pacific nations to “resolve our differences through dialogue and consultation.” (See story on this page.)

Speaker Feliciano Belmonte Jr. welcomed Obama’s reiteration of support for the Philippines but said the United States should have acted more decisively much earlier against China’s incursions into Philippine territory.

“I guess it’s better late than never. The right time was before China started infringing on our territory, which led to the conversion of reefs and sandbars into islands with military capability,” Belmonte said.

“Although the US has not always acted with urgency ever since they announced their ‘pivot to Asia’ policy in 2011, allowing China to commence reclamation in the West Philippine Sea even as early as 2013, at least now they see the threat that China’s reclamation and construction poses not only to the Philippines but also to other countries in the region and to freedom of navigation for all countries,” Acedillo said.

But Kabataan Rep. Terry Ridon belittled Obama’s remarks as a mere “reiteration” of the US pivot to Asia that he said should be a cause for concern among Asean countries.

“This readiness to help is shorthand for readiness to intervene in the regions’ internal affairs,” Ridon said. With reports from Gil C. Cabacungan, AFP and AP