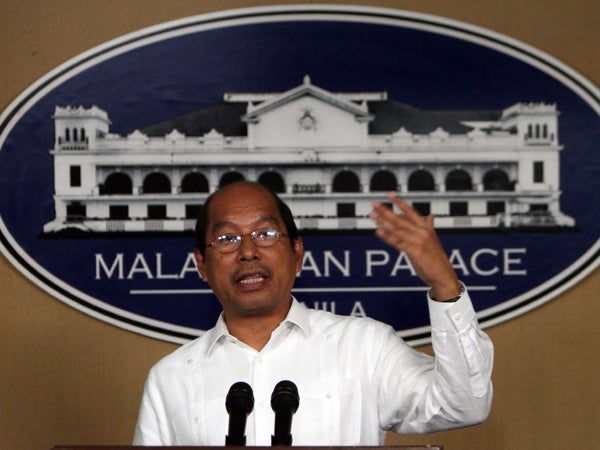 The actual cost of the Philippines’ hosting chores, including holding hundreds of meetings before the two-day discussions among 21 heads of state, was still being computed, Budget Secretary Florencio Abad told the Inquirer on Friday, a day after the summit closed.

“We will know only when the report comes in,” he said, adding that public funds spent for Apec 2015 were subject to audit.

The budget official said he was not privy to the budget allocated for the event and “cannot confirm” speculations that the country spent as much as P10 billion for the Apec summit.

“You can check with the executive secretary,” Abad said.

In Bulacan on Thursday, presidential candidate Sen. Grace Poe, and her running mate, Sen. Francis Escudero, urged the government to account for all Apec-related expenditures.

In a statement, Escudero said a breakdown of government expenses and details of its arrangements with the private sector would “foster transparency and accountability.”

“Let’s review what has been done, what was spent, and see the cost-benefit, if it [was] worth it,” he said.

In Clark, Pampanga province, Rep. Oscar Rodriguez, chair of the House committee on good government and public accountability, said his committee would review Apec expenditures once the matter was referred to it.

At the forum of the Capampangan in Media Inc., Angeles City Councilor Max Sangil urged Rodriguez to conduct an investigation on the matter, saying it was his right as a taxpayer to know where public funds went.

Sangil wanted to know why the Aquino administration reportedly spent P10 billion in hosting Apec 2015 when, he said, the administration of former President Fidel Ramos used only P500 million when it hosted Apec 1996 at the Subic Bay Freeport.

But Rodriguez, an ally of President Aquino, asked critics “to give the national government the benefit of the doubt.”

Representatives of Apec’s 21 member-economies held 229 meetings, Mr. Aquino said, to “advance our individual economies and [that of] the region at large.”

The President said he was “proud to have continued our success as hosts by laying the foundations on which Apec can chart a course to improve trade and strengthen quality growth.”

Palace: Apec expenses to be audited; every peso to be accounted for