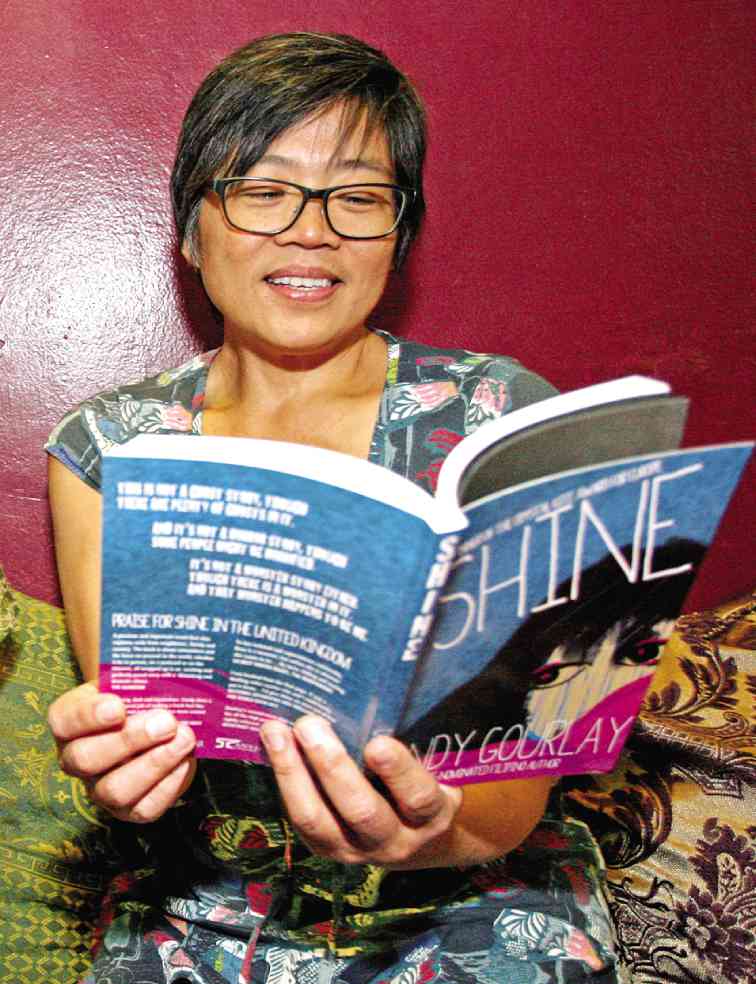 GOURLAY: It’s not write what you know but who you are. KIMBERLY DELA CRUZ

Candy Gourlay was going through an identity crisis of sorts.

“I had a real problem in England because when I moved to England my husband registered everything under ‘Candy,’” said the 52-year-old novelist. Gourlay’s real name is Maria Cristina Lopez Quimpo Gourlay, but upon arriving in England in 1989, Gourlay’s husband, Richard Gourlay, registered her under the name “Candy Gourlay.”

“So I had a real problem with my identity,” she explained. “My driver’s license, my passport—I couldn’t prove who I was.”

Two weeks ago, she solved this problem by changing her name officially to “Candy Maria Cristina Lopez Quimpo Gourlay.”

Identity is an important element in the life and work of the London-based Gourlay, whose young adult (YA) novels “Tall Story” and “Shine” have received so much international recognition. For Gourlay, it is a passion that started from childhood.

Born in Davao City in 1962, Gourlay is the second of six children of architect father Orlando and teacher mother Cynthia. She was 6 when she fell in love with words.

While visiting her grandmother’s house in Cubao, Gourlay was told by her grandmother not to go into her room or touch anything. “So of course, I went into her room,” she recalled. There she found a set of books, the ‘Beverly Gray’ mysteries, American books published from 1935 to 1955.

“I just tried sounding out the words and I realized that the words come together and become a story. Wow! This was amazing,” she said.

Discovering the books opened up her world. “I could be anywhere. The character was a journalist and in that book she traveled. I can be that person. I can be anyone I want if I read. That day I decided I wanted to be an author of books.”

When it came time to choose a career, Gourlay felt that the state of publishing in the Philippines at the time made it impossible to be the kind of writer she dreamt of. “So I became a journalist instead,” she said.

After graduating from Ateneo de Manila University in 1984 with a degree in communication arts, Gourlay joined the nascent Mr & Ms Special Edition under publisher Eugenia Apostol and editor Letty Jimenez-Magsanoc just as the regime of the dictator Ferdinand Marcos was entering its final phase. When the Mr & Ms Special Edition became the Inquirer Weekly, Gourlay became one of its first reporters, later moving to what is now the Philippine Daily Inquirer as a deskman.

Gourlay moved to the United Kingdom in 1989 after marrying Richard, who was the Financial Times of London’s correspondent in Manila. She found work as a journalist for a magazine and a press service. But after losing her second child, she thought to herself that life was too short. She quit.

“My life turned from writing to staying in a house changing diapers and washing dishes. That felt like death,” she said.

“So [I thought], how could I stay at home and still be fulfilled? Then I remembered that dream of being an author. And I realized I could do it there. So I started writing,” Gourlay said.

Gourlay struggled to get herself published. The first novel she wrote was a thoroughly Western book with a British setting and British characters. “I always wanted to do fiction from when I was small. But I really didn’t believe I could be an author. When I was a kid there were no Filipino books. In all the books that I loved, everyone was blonde and fair-skinned,” she said. “So I thought maybe Filipinos don’t belong. Maybe we don’t deserve to because our stories are too yucky. And as I grew older, it got more embedded in me.”

An agent who rejected her book told Gourlay she needed to be in the book. “And then I realized I was still that little girl in Manila who believed she wasn’t allowed in the book,” she remembered. “It’s difficult when you write about who you are and explore what being a Filipino is. It’s not a fun thing.” That’s when she told herself, “It’s not write what you know, it’s write who you are.”

After winning a competition, she found an agent, Hillary Delamere. In 2009, Gourlay finished writing “Tall Story,” a basketball-themed tale of mismatched half-siblings that crossed over from the Philippines to the UK. Her agent submitted it to David Fickling, the respected British publisher of children’s fiction whose imprint had been bought by Random House. Fickling bought the book, giving Gourlay a two-book deal. David Fickling Books (DFB) published the book in Britain in 2010 and Cacho Hermanos published it in the Philippines.

“Tall Story” was short-listed for 13 children’s book awards. It won the Crystal Kite Prize for Europe and the National Children’s Book Award (NCBA) in the Philippines.

Gourlay said it all caught her by surprise. The high point was winning the NCBA, “because I came from the Philippines.” “When I write, my primary audience is Filipinos, and what I try to do is make it acceptable to a Western reader,” she said.

When Gourlay was unable to come to the Philippines to receive the award, her mother Cynthia—a frustrated writer—received the award and even gave a speech.

The accolades that “Tall Story” received put pressure on Gourlay who had begun working on her next novel. “It was the pressure, and at the same time I had a bad start from the beginning,” she said.

“Twilight” was all the rage at the time, so she tried writing her version of a vampire book, featuring a manananggal. In the end, she hated it.

“I took too many shortcuts,” she admitted. But a long conversation with her editor at DFB, Simon Mason, gave her an epiphany. She would keep the protagonist, a girl with no voice: “Having no voice was a big metaphor for being a stranger in a strange land and nobody can understand you.” She retained the theme: “I was interested in why would an innocent person be accused of being a monster. If you think about vampires, it’s not their fault they are who they are.” It became a different book.

A book about a 13-year-old named Rosa who suffers from a condition that made her mute and left scars on her neck on an island where the superstitious people consider the condition—called the Calm—to be the signs of a monster, “Shine” was published by DFB in the UK last year and published this year in Manila by Anvil Publishing. It has already won the Crystal Kite Award for Europe and will be launched on Sept. 27 at the National Book Store in Glorietta 1.

Children’s book blogger Blooey Singson explained that she liked the personality in Gourlay’s books. “They’re quite atypical compared to the countless YA offerings on the bookstore shelves. There’s a sincerity to them that gives you the sense that the author is writing what she wants to write, as opposed to what is trendy,” she said.

The juxtaposition of the two cultures “underscores what they have in common,” Singson noted.

Gourlay, who speaks animatedly with just the tiniest hint of a British accent, is currently in the country to promote her book. She’s writing her next book, a historical novel about a boy living in Bontoc province in the 1900s and expects to be finished by the end of the year. That book will be followed by a second, which details the boy’s experience as part of the infamous Philippine exhibit at the 1904 World’s Fair in St. Louis, Missouri.

Part of what makes Gourlay’s work unique is how it shows the clash of cultures between the Philippines and the UK.

“I live two lives. In England, I’m more westernized than a lot of Filipinos I know. But also because my children who are Filipino will read the book and I want them to see themselves in it,” she said.

Two of Gourlay’s children, 24-year-old Nick and 16-year-old Mia are dual citizens of the Philippines and the UK, just like Gourlay. Her 20-year-old son Jack is in the process of doing the same. Her husband, who now manages a venture capital fund, also tried to gain Filipino citizenship but was unsuccessful.

“My children are growing up and their identities are very English, but they have a strong pride and love for the Philippines,” she explained.

Ramon C. Sunico, who published Gourlay at Cacho and published her again as assistant publishing manager for children’s books and YA fiction at Anvil, points out that Gourlay “sets a standard, an international one, for future novelists to follow.”

“[She] is already way past the realm of Philippine literature—that’s the significant thing above all. She is part of the British YA lit scene now, and that she persists to write for us as well is a great act of patriotism,” said Sunico.

For Gourlay, immersed in the life of writing that she had wanted as a child, writing for younger readers continues to inspire her.

Salamin: A Filipino in America holds up a mirror

Setting up business in the UK