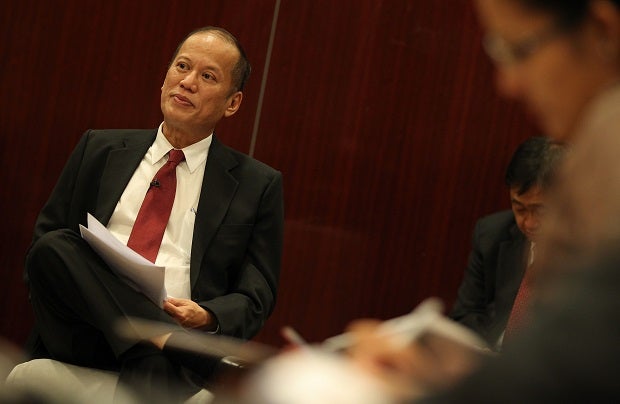 President Benigno S. Aquino III at a forum in Berlin with members of the Philippine media before he left for Boston. Malacañang Photo Bureau

President Benigno Aquino III ended his weeklong European trip on Saturday convinced that he had gathered enough support behind the Philippines’ call for a peaceful resolution of conflicts in the South China Sea, particularly through international arbitration.

“The short answer is yes,” he told reporters over coffee at 8 p.m. on Friday here (3 a.m. Saturday in Manila) when asked if he felt he had achieved the goal of his four-nation tour of Europe.

With Spain (which has offered to be the Philippines’ voice in the European Union), Belgium, France and Germany all seeking a resolution of the territorial disputes through processes provided under international law, the President said it was time to “get to a stage where we have reasonable and doable objectives.”

Mr. Aquino said he had been told by some of his European counterparts that they had been asking Beijing about its claim to 90 percent of the 3.5-million-square-kilometer South China Sea.

He said another point of inquiry was “adherence” to the United Nations Convention on the Law of the Sea (Unclos).

One of the most categorical statements came from German Chancellor Angela Merkel who described “international dispute settlement arrangements that we have on the basis of Unclos” as “a very good way forward in order to settle those differences.”

“We share the concerns about the tensions arising in that particular part of the world and we believe in good, pragmatic approaches,” Merkel said. “But we also believe in solid, legal settlements of the disputes.”

Merkel cited similar cases in Europe where Germany took the position that “we should embark on such roads where the limitation, for example, of borders has to be settled by arbitration.”

“So that is the road that we would opt for,” she said. “A peaceful approach, a diplomatic approach is always the one that is called for.”

The Philippines and China are locked in dispute over territory in the South China Sea, where islets, reefs and atolls are believed to be sitting atop vast reserves of natural gas and oil.

Beijing has also seized several islets in the Spratly archipelago that are in the West Philippine Sea, including Panganiban Reef (Mischief Reef), which it has converted into an offshore garrison, and Mabini Reef (Johnson South Reef), where it is reclaiming land that could be used to build an airstrip.

China is also harassing supply vessels to keep them from restocking a small Filipino garrison on the BRP Sierra Madre, which Manila grounded on Ayungin Shoal (Second Thomas Shoal) in 1999 to mark Philippine territory in the Spratlys.

Without military muscle and firepower to counter China’s aggressive actions in the West Philippine Sea, Manila filed a petition for arbitration in a United Nations arbitral tribunal in The Hague in January last year.

In late March, the Philippines submitted evidence to the tribunal, which ordered China to comment on the Philippine case by Dec. 15.

China has refused to take part in the proceedings, insisting on bilateral negotiations to resolve the dispute.

At a policy forum here on Friday, Mr. Aquino reminded China that it is a signatory to Unclos, which grants countries 370-km exclusive economic zones in the sea.

Mr. Aquino rejected China’s position to resolve the dispute through bilateral talks, noting that there are six claimants to territory in the South China Sea.

“How does a situation where two parties agree to a solution bind the four other parties who are not even part of the dialogue?” Mr. Aquino asked.

Besides the Philippines, Brunei, Malaysia, Vietnam and Taiwan also claim parts of the South China Sea, but China spurns their claims and rejects efforts at resolving the conflicts on international forums, always insisting on one-on-one talks with its rival claimants.

“This problem has been put on the back burner for far too long and that’s why in the Philippines’ case, we want a resolution,” President Aquino said in a joint press conference with Merkel at the Federal Chancellery here earlier on Friday.

“It is not a situation that can be ignored and it has to be confronted and perhaps that will prod everybody to arrive at a solution based on international law, based [on] justice and fairness,” Mr. Aquino said.

The Philippines has been trying to “internationalize” the issue, arguing that instability in the South China Sea could also affect global trade.

The disputed waters are crisscrossed by vital sea-lanes where a third of annual global commerce passes, making the disputes a major concern for countries that trade with emerging economies in Southeast Asia.

Mr. Aquino sought to drive home the same message in another policy speech before members of Koerber Stiftung Foundation and Asia-Pacific Committee of German Business.

Threats to rule of law

The President said “tensions in the South China Sea have created uncertainty in our region” and “this uncertainty poses threats to the rule of law.”

“Ladies and gentlemen, if it is true that international law embodies our consensus as coinhabitants in a single, global community, then it stands to reason that violating it means flouting not just a single nation, but the entire community of nations,” he said.

“Conversely, observing international law strengthens a dynamic harmony among nations, which could then be harnessed to uplift the lives of all,” Mr. Aquino said.

At the open forum, Mr. Aquino was asked how he intended to “balance” the need to resolve the Philippines’ territorial dispute with China with its economic relations with the Asian powerhouse.

“We still adhere to that belief that this particular tension should not be the be-all and end-all of our relations with China,” Mr. Aquino replied.

But the Philippines, he said, could not stand down and tell China, “Yes, OK, you are the bigger country, you are the military power, you have everything and we have nothing except what we believe is right.”

“At the end of the day, if we [fail] to protect our rights, then we will lose them [because] we don’t think anybody else will rise up to protect [our] rights, which we chose not to defend,” he said.

“Now it behooves us to really expand our trade relations with everybody [who is] willing and eager to trade with us. Perhaps to give us that degree of independence that we need to chart our own course,” he said.