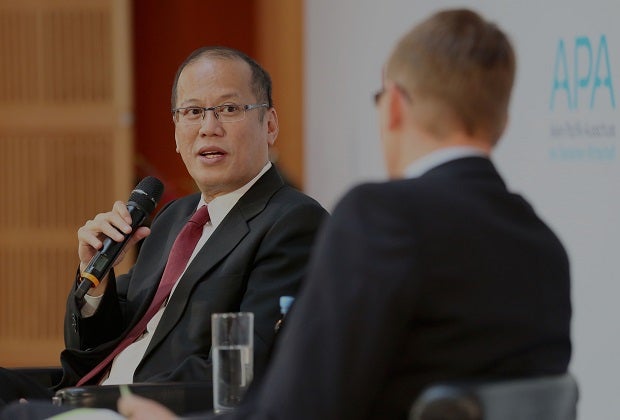 BOSTON—Four speeches in three days, a pizzeria meeting with a Kennedy and coming home to Boston are some of the highlights of the four-day visit of President Benigno Aquino III to the United States, which officially starts on Sunday afternoon, dawn on Monday in Manila.

Mr. Aquino will arrive at Boston’s Logan International Airport at 9:30 p.m. on Saturday (9:30 a.m. Sunday in Manila), straight from a weeklong, four-nation tour of Europe.

It marks Day 8 of his 12-day working trip and gives him some rest, as his official activities begin on Sunday afternoon.

Mr. Aquino’s speeches will include a push for a cleaner and safer world at the UN Climate Change Summit and another push for international support for the Philippines’ call for the rule of law to be followed in the settlement of territorial disputes in the South China Sea, this time with academics and students from two of America’s Ivy League schools as his audience.

The Philippines’ territorial row with China was high on the President’s agenda on his European trip, with Mr. Aquino calling on leaders of the European Union to support the country’s call for international arbitration to resolve the dispute.

Mr. Aquino also trumpeted the Philippines’ economic turnaround under his administration, which winds up in less than two years.

In the United States, the President will begin his day in Boston on Sunday meeting with the friends of his late parents, democracy icons Sen. Benigno “Ninoy” Aquino Jr. and former President Corazon “Cory” Aquino.

The venue and time of the private meeting remained undisclosed as of press time.

Mr. Aquino will attend a special Mass at 3 p.m. (3 a.m. Monday in Manila) commemorating the 42nd anniversary of martial law in the Philippines.

The timing couldn’t be any less fortuitous.

Boston became the Aquino family’s home while in exile in the United States during martial law. The President’s mother described the years they spent in their Newton, Massachusetts, home from 1980 to 1983 as the happiest for their family. Only son Noynoy followed them in 1981, after graduating from Ateneo de Manila University.

Senator Aquino, whom the dictator Ferdinand Marcos allowed to have a heart operation in the United States, was in the company of his wife and children and not locked behind bars as the major opposition leader for seven years and seven months.

Ninoy pressed his struggle for the restoration of democracy in the Philippines in the United States, giving speeches, press interviews and lecturing at prestigious universities.

On Aug. 21, 1983, Ninoy returned to Manila and was assassinated at the international airport, sparking a nationwide outrage that ultimately led to the Edsa People Power Revolution three years later, which brought down the Marcos dictatorship and restored democracy in the Philippines.

His wife Cory and son Noynoy had always been his quiet supporters in the background even in Boston.

Cory returned to Boston in September 1986 as President of the Philippines and this weekend, Noynoy replicates his mother’s nostalgic trip.

As the Philippines’ 15th President, Mr. Aquino will give a speech at a meeting with the Filipino community after the Mass. It will be the first of the four speeches he will deliver during his official visit to the United States.

Mr. Aquino will meet with the recipients of the Benigno and Corazon Aquino Scholarship at Boston College.

On Monday, the President will meet with United States Rep. Joseph Kennedy III and perhaps enjoy a slice of pizza at Bill’s Pizzeria in Newton.

On a recent visit to the Philippines, Kennedy, the 33-year-old grandson of the late US Sen. Robert Kennedy and grandnephew of US President John F. Kennedy, invited Mr. Aquino to meet if the President found himself in Boston.

The 30-minute meeting will be followed by a business meeting with an American company and, tentatively, interviews with US-based journalists.

At 4:30 p.m. (4:30 a.m. Tuesday in Manila), Mr. Aquino will give his second speech, a policy discourse at Kennedy School of Government at Harvard University.

He is expected to speak on how “good governance is good economics in the Philippines, the challenge of inclusive growth, the Mindanao peace process, the rule of law and the state of play in the South China Sea.”

After his speech, the President will entertain questions from the audience. The ground rules for the question hour include “one brief question per person, no speeches” and “question ends with a question mark.”

At 11:30 a.m. (11:30 p.m. in Manila), he will speak about the Philippines’ policies on climate change and how the country, battered by fierce typhoons, is coping with the challenges.

Mr. Aquino will give the speech only days after Manila and neighboring provinces were inundated by heavy rains brought by Tropical Storm “Mario” (international name: Fung-Wong).

The UN Climate Change Summit Plenary 2014 is a brainchild of UN Secretary General Ban Ki-moon to rally world leaders into shaping an acceptable agreement to reduce greenhouse gas emissions at the Climate Change Conference in Paris next year.

US President Barack Obama is expected to attend the conference.

The leaders will be divided into three plenaries and President Aquino will join the third plenary.

After attending the summit, Mr. Aquino will have a round-table with chief executive officers and other senior officials from the US Chamber of Commerce and the US-Asean (Association of Southeast Asian Nations) Business Council.

At 5:20 p.m. (5:20 a.m. Wednesday in Manila), Mr. Aquino will arrive at Columbia University, where he will deliver his fourth speech.

As the speaker for the yearlong World Leaders Forum of Columbia University, President Aquino will discuss “Pursuing the Path to Peace and Progress in Asia: the Philippine Perspective.”

Earlier, the Department of Foreign Affairs (DFA) said President Aquino’s discussion would include Asean “as a driving force, the United States as a Pacific power, China as the influential neighbor and emerging world power, and the basics of peace and progress.”

The President will take questions from the audience after his speech.

On Wednesday morning, the President will leave for San Francisco, where he will have business meetings.

He will leave San Francisco to return to Manila in the afternoon.

He is expected to land at Ninoy Aquino International Airport Terminal 2 at 10 p.m. on Thursday.

Aquino trip to US a mix of nostalgia and triumph