Salamin: A Filipino in America holds up a mirror

“No one can live in two places,” Third, as Paran is known to friends, writes. “It wouldn’t be living. To truly live, you must be rooted in the land. A virtual life doesn’t count. It’s not a life if you can log out.”

It’s been three years since Third wrote that and the explosive growth of social media has certainly made it possible for many more Filipino expats to try to hang on to life in the Philippines through cyberspace. 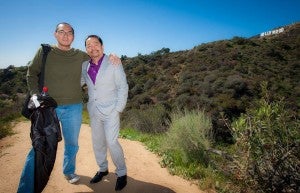 Still, Third makes a strong case for rootedness which he reaffirms this month with the launch of a new magazine. It’s called Salamin, or mirror, and it seeks to reflect the Filipino story in America.

Salamin is a print publication. You don’t need to be logged in to check it out. Does it make sense to put out a print magazine at a time when print media is dying?

Third works for a print news publication in southern California, so he knows the challenge he has taken on.

But Salamin, he says, is not going to be yet another outlet for breaking, real-time news. You can get that from many other places on the Web.

Instead, the mirror Third is holding up hopes to project a broader, deeper, more meaningful picture.

“The profiles, stories, and reviews that we write will be good not just for a day but for weeks and months, even years,” Third told me. “In fact, if one day five years from now, somebody picked up a copy of Salamin and started to read about the Filipino artists — the writers, musicians and painters — whom we feature, that would make me a very happy man.”

Salamin will also come out quarterly. “I wouldn’t do this if this were monthly,” he said.

There are still many free weekly newspapers that can be found at grocery stores and restaurants. Most of the Philippine-based publications are also available online.

But in the US, the experimentation in Filipino American media continues.

Just recently, the team that spearheaded Filipinas magazine in the 1990s, gave the digital realm a try with the launch of Positively Filipino. Salamin could complement that effort – especially if Third’s vision materializes.

And he feels passionately about what he’s trying to which is a good sign.

“Every culture deserves to be celebrated in every way possible. It’s dangerous not to celebrate our culture, to NOT tell our story, because if we don’t tell our story, somebody might tell it for us and if somebody tells our story for us, it might not be the real story but their version of it. I’m doing a magazine because I want Filipino-Americans to have a voice, to have another voice.”

Third, who is turning 41, is a native of Daraga, Albay and a fellow UP Diliman alum. He moved to the United States in the mid-2000s. Like most Filipinos who come to America, he began by straddling two worlds, eventually coming to terms with the new society he chose to embrace.

“I guess, if I think about it, it’s a tribute to my new culture, to my second home. To me this is a way of giving back. Like I said over the phone a few days ago, I cannot give anything else–not money, not time, not donations–but I can give this.”