PARIS—President Benigno Aquino III is not convinced that China would go to the extent of attacking the Philippines despite what he considered its “emerging pattern of aggression” in the South China Sea. 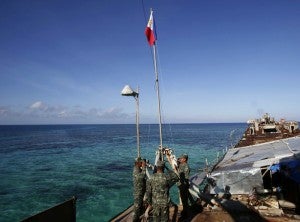 In this March 30, 2014, file photo, Philippine Marines raise the Philippine flag on the first day of their deployment on the dilapidated navy ship LT57 BRP Sierra Madre at the disputed Second Thomas Shoal, locally known as Ayungin Shoal, off the West Philippine Sea. AP PHOTO/BULLIT MARQUEZ

The President was bombarded with questions on the Philippines’ territorial dispute with Beijing shortly after he delivered a policy speech at the French Institute of International Relations (IFRI) here Thursday night (early Friday in Manila).

“If they do decide to attack us—and I don’t think and I have to be very clear about that—I couldn’t see the logic for them to do so and there is no amount of spinning of the story that will justify such an action,” he told French researchers and policy experts.

Asked if China was seeking to become a “major maritime power,” the President said: “I don’t think that anybody is suggesting at this point in time that they are on the march for world domination.”

But warned against the “more real risk” of a serious physical miscalculation” because of “scenes of unexpected developments” when China deployed oil rigs in waters also being claimed by Vietnam.

“The actions and reactions by both sides were not expected but they did result in what the Americans would say, in effect, playing chicken, with quite a lot of number of people playing it the same time,” he said.