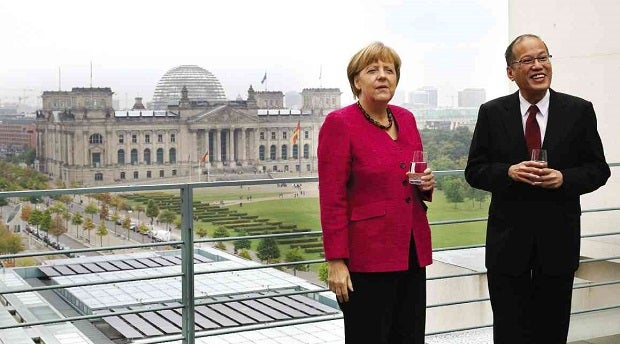 LAST STOP IN EUROPE President Aquino converses with Federal Chancellor Dr. Angela Merkel upon arrival at the Federal Chancellery on Friday. The President flies to the United States on Sunday for a sentimental journey to Boston and to address the United Nations. RYAN LIM/ MALACAÑANG PHOTO BUREAU

BERLIN—President Benigno Aquino III won the support of another world power—Germany—in the Philippines’ call for international arbitration to resolve the territorial disputes in the South China Sea.

German Chancellor Angela Merkel on Friday urged China to settle its territorial disputes with the Philippines and other countries through mechanisms provided for under international law.

Mr. Aquino and Merkel spoke at a press conference at the Federal Chancery shortly after the Philippine leader arrived on the fourth and final leg of his European tour.

Mr. Aquino would fly to the United States tomorrow from Berlin.

Asked what role Germany could play to resolve the territorial quarrel, Merkel said her country “is well-advised to point to the fact that we have international bodies to settle such matters.”

“A peaceful and diplomatic approach is always the one that is called for,” she said, adding: “That is the road that we would opt for.”

In his statement, Mr. Aquino said he and Merkel “share the conviction” that disputes “must be settled peacefully and should be based on international law.”

Before leaving Paris, President Aquino told an audience of French policy experts and researchers that he expected 2015 to be a “banner year” for the Philippines owing to the country’s economic turnaround.

Mr. Aquino said this turnaround was “especially significant” as the Association of Southeast Asian Nations (Asean) transforms itself into one economic community.

“Given the unprecedented confidence enjoyed by our country, we expect 2015 to be a banner year,” he said in a speech at French Institute of International Relations on Thursday night (12:30 a.m. on Friday in Manila).

“After all, the factors that can allow us to build on our momentum are in place,” he said.

Mr. Aquino cited the so-called “demographic sweet spot” that the Philippines is expected to hit next year, with a big proportion of its population entering working age.

“We have been investing in our greatest resource—our people, resulting in an expanding, productive labor force now even more prepared to seize all the opportunities,” the President said.

“We have a strategic location and vast potential to be a crucial hub of trade, investments and services,” he added.

Mr. Aquino said the Asean regional integration would “open doors of opportunity” to France and the rest of Europe. 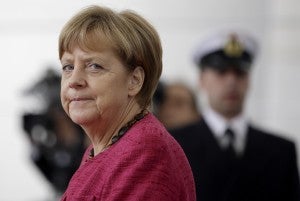 German Chancellor Angela Merkel arrives for a military welcome ceremony for the President of the Philippines, Benigno S. Aquino III. at the chancellery in Berlin, Germany, Friday, Sept. 19, 2014. AP/Michael Sohn

“This is a milestone in the evolution of Asean as we pursue the common prosperity of our peoples and foster the peace and stability fundamental to continued development,” he said.

“This is a timely development,” Mr Aquino added. “Given the recovery of markets in the Western hemisphere, increased cooperation can only redound to a healthier global economy and the promise of further growth and development for all.”

The President paraded the country’s economic gains: The business process management sector “continues to mark impressive growth, manufacturing has rebounded impressively and tourists all over the world are flocking to our beaches and cities, seeing for themselves how truly, it is more fun in the Philippines.”

“It is clear: Good governance is good economics,” he said.

“Money that once went to the corrupt now goes to massive investments, as exemplified by our budget for social welfare, health and education… increasing in multiples,” he said.

In the three European countries he has visited in his current trip, Mr. Aquino emphasized before audiences in Spain, Belgium and France how his administration had “transformed” the Philippines since he took office in 2010.

From apathy to hope

The President arrived in Berlin, Germany—the final leg of his European trip—Friday morning (4:45 p.m. in Manila).

He was scheduled to meet with German Chancellor Angela Merkel and Federal President Joachim Gauck.

“Perhaps you will allow me to share with you our transformation from a country mired in apathy and hopelessness, to a nation with a dynamic, emerging economy, whose people have a newfound hope and optimism,” he said.

“When my administration came into office, we found a government in shambles and a people devoid of hope. Businesses were loath to invest in the Philippines because of the unpredictable environment,” he added.

As in his speeches in Spain and Belgium, Mr. Aquino reminded his French audience of the upgrade in credit ratings the Philippines has achieved and its rise in global competitive rankings.