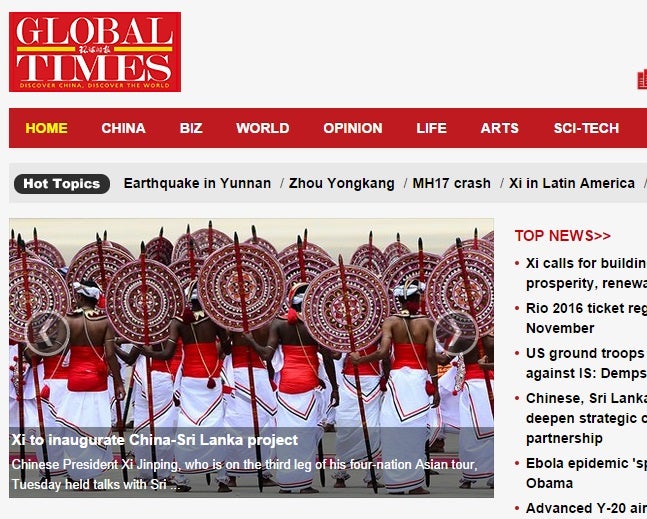 MANILA, Philippines—A Chinese state-run publication has called the Philippines a “quasi-rogue” state and demanded a public apology from President Benigno Aquino III for what it called “serial attacks on Chinese citizens.”

“Poor social governance, an anti-China sentiment, and a Western-style democratic system where nationalism can foment wantonly make the Philippines a quasi-rogue state,” the Global Times said in its editorial published on September 16.

“We demand that Philippine President Benigno Aquino III make a public apology for the serial attacks on Chinese citizens and severely reprimand the criminals, which may add to our confidence in the Philippine government ensuring the safety of Chinese citizens,” it said.

Global Times is owned and published by People’s Daily, the official newspaper of the Communist Party of China.

The editorial cited the recent incident where a Chinese citizen was injured after being shot in Bulacan province and the kidnapping of two Chinese nationals on Sept. 8 and 11.

Philippine police have not yet determined the motives for the crimes but the Global Times assumed in its editorial that the ongoing maritime dispute between China and Philippines was the reason behind them.

“Although the Philippines is suffering from a deteriorating security situation, the spate of incidents targeting the Chinese over the past week inevitably prompts the public to connect them to the escalation in tension between Beijing and Manila,” it said.

Philippines and China are locked in an arbitration case before an international court over China’s claim of “indisputable sovereignty” in nearly the entire South China Sea including portions of the Philippines 200 nautical mile exclusive economic zone.

Since the Scarborough Shoal Standoff in April 2012, China has maintained control of the Philippines entire western seaboard including the waters of the Spratly Group of Islands.

Filipino fishermen have been repeatedly forced to leave the area by Chinese Coast Guard vessels patrolling the waters.

The Philippines has previously called for a freeze on actions in the South China Sea after China was found to have been conducting reclamation projects on several reefs believed to be a precursor to the construction on military bases.

“To begin with, the Philippine authorities are a major agitator of a nationalist and anti-China sentiment among its population, which can easily turn into extremism,” Global Times said.

“Consequently, certain criminals may take advantage of this anti-China mood as a cover to increase the likelihood of escaping punishment for their crimes,” it said.

Global Times cited the 2010 Manila Hostage Crisis that left eight tourists from Hong Kong dead and the 2013 shooting of a Taiwanese fisherman as incidents where the Philippine government “failed to adopt immediate measures each time.”

The newspaper said that the recent travel advisory of the Ministry of Foreign Affairs asking Chinese nationals to refrain from going to the Philippines should serve as a warning.

“We will not sever our engagement with the Philippines as it is our near neighbor. Nevertheless, given what it has done recently, we are highly suspicious of whether it is capable of abiding by international laws,” Global Times said.

“We advise Chinese citizens not to travel there in the near future, which, while being an act of caution to ensure one’s safety, is also a warning signal to the Philippines,” it said.