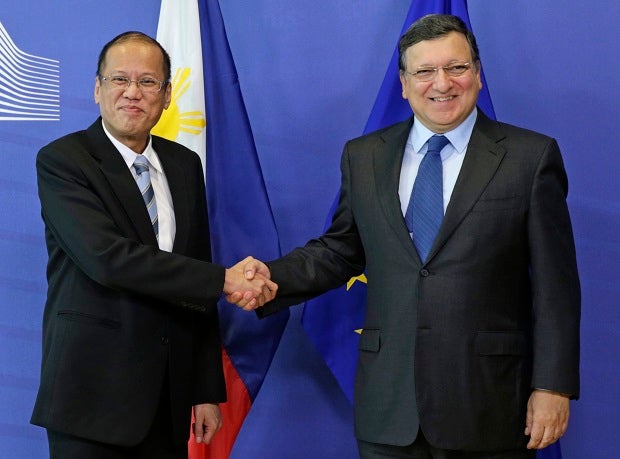 BRUSSELS, Belgium—President Benigno Aquino III called on Europe to stand behind the Philippines in its campaign for a peaceful resolution of conflicts in the South China Sea.

“Doing the reverse, being quiet, might embolden adventurous souls to continue trying to push the envelope as to what they can get away with,” he said in apparent reference to China at a forum organized by the Egmont Institute at the Château of Val-Duchesse here.

Noting that 40 percent of global trade uses the South China Sea, he asked: “If the situation changes, how does one have any source of stability, which is necessary for any prosperity or growth to continue?”

“We understand that the EU is one of the biggest, if not the biggest, trading partner of our big brother [China] to the West. Of course, the opinion of the biggest market has to influence the decisions of the seller,” he said during an open forum. “So, your push as opposed to being quiet about the situation prevailing in the South China Sea adds its own measure of a push towards solving it, again, based on international law and based on a system of rules and perhaps, an adherence to the commitments that have already been undertaken by the world especially Unclos [United Nations Convention on the Law of the Sea] in this particular matter.”

The Philippines has been trying to “internationalize” its territorial dispute with Beijing, which is claiming around 90 percent of the South China Sea.

The strategy, which is detailed in the Philippines’ proposed Triple Action Plan, did not sit well with China, which rejected the arbitration case filed by Manila and instead wants to deal with individual claimants.

Mr. Aquino reminded his European audience that resolving conflicts peacefully in this key maritime corridor would benefit the rest of the world.

“Ensuring that the rule of law is respected in one part of the world redounds to a global order informed by fairness, equality, and a sustainable harmony that can only contribute to stability in all of our regions,” he said in a speech he delivered at 12:30 a.m. Manila time.

The EU earlier made it clear that claimant countries should “seek peaceful solutions, through dialogue and cooperation, in accordance with international law.”

European Commission President Jose Manuel Barroso cited in particular the importance of adhering to Unclos, a position consistent with that of the Philippines.

“We welcome the EU’s support and help if indeed more statements to the effect of resolving it in peaceful dialogue and adherence to international law do come about,” Mr. Aquino said.

“We maintain that we must pursue a solution that adheres to the rule of law—and one that maintains peace and the freedom of navigation in the region.”