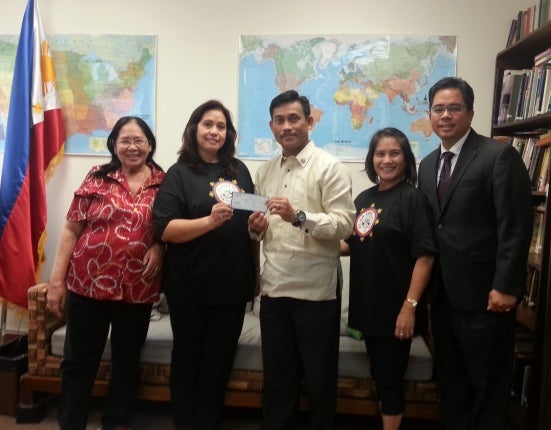 SAN FRANCISCO — Nearly a year after Typhoon Yolanda (Haiyan) ravaged communities all over the Visayas region, Filipino-Americans are still sending support to the rehabilitation and reconstruction of the affected communities in the Philippines.

The organization’s donation of $1,000 was collected from fundraising activities, and will be forwarded to the Philippine Red Cross (PRC), to aid in PRC’s rehabilitation efforts in the Yolanda-affected areas.

Consul General Bensurto thanked the Filipino American Community of Los Banos, California for their untiring efforts on behalf of their compatriots affected by Yolanda. “It is heartwarming to know that despite the distance, our community’s hearts continue to be with the Philippines,” he said.