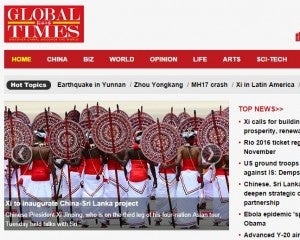 That was the terse reply of Foreign Affairs spokesman Assistant Secretary Charles Jose Thursday when asked on the stand of the department on an editorial published by a China state-run newspaper, calling the Philippines a “quasi-rogue” state.

In a press briefing, Jose said that the Department of Foreign Affairs (DFA) will instead focus on addressing the travel advisory issued by China last September 12 warning against traveling to the Philippines.

“What is more important is we address the travel advisory issued by China. We think it is very important and we should focus on that because of the impact it has on our economy, particularly on tourism and possible foreign investment,” Jose said.

The DFA spokesman added that the department has taken “necessary and appropriate measures to ensure the protection and safety” of Chinese citizens in the country.

Jose also said that the DFA hopes that the Chinese government will lift the travel ban on the country “at the soonest possible time”.

The Global Times, a newspaper being published by the ruling Communist Party of China, published an editorial last September 16 demanding a public apology from President Benigno Aquino III for what it called as “serial attacks on Chinese citizens.”

The editorial said that a Chinese citizen was injured in a shooting incident in Bulacan province and two Chinese nationals were kidnapped on September 8 and 11.