MANILA, Philippines – Citing that the security situation in Israel and Palestine has improved, the Department of Foreign Affairs (DFA) lowered its alert levels. 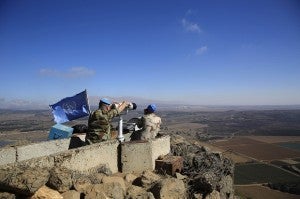 In this photo taken on Tuesday, Sept. 16, 2014, U.N. peacekeepers from the United Nations Disengagement Observer Force, also known as UNDOF, observe Syria’s Quneitra province at an observation point on Mt. Bental in the Israeli-controlled Golan Heights, overlooking the border with Syria. AP

In a press briefing Thursday, Assistant secretary Charles Jose said that the alert level in Israel would be downgraded from 2, which entails restriction for overseas Filipino workers (OFWs) to fly to the country, to 1.

Alert level 1 remains in Israel because it is still facing external threat, he said.

DFA also lowered the alert level in Gaza from 4 (mandatory repatriation) to 2 (restriction phase). The restriction for OFWs remains for humanitarian considerations.

Jose said that the security situation in these territories has improved due to the ceasefire between Hamas and Israel forces.