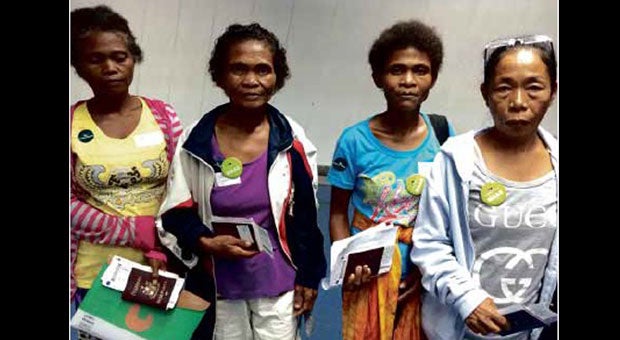 FLYING HIGH Off to India to study solar energy, these Aeta women line up at the immigration counter of Ninoy Aquino International Airport Terminal 1 as they await their first ever plane ride. CONTRIBUTED PHOTO

MANILA, Philippines–Evelyn Clemente, a 49-year-old member of the Aeta tribe in Zambales province, had never taken a plane in her life until Thursday.

“Kalabaw at jeep lang ang sinasakyan namin. (We ride only carabaos and jeepneys),” she said, holding a passport as she lined up at the immigration counter at Ninoy Aquino International Airport (Naia) Terminal 1.

She and three other Aeta grandmothers left the country for New Delhi, India, at noon on Thursday to study solar energy for six months and become “solar engineers” of their communities upon their return.

Clemente and Sharon Flores, 40, come from an Aeta community in Subic, Zambales province, while Cita Diaz, 40, and Magda Salvador, 42, are from Bamban, Tarlac province.

The four Aeta grandmothers are the first batch of seven people belonging to the Indigenous Peoples (IP) in the Philippines chosen to be scholars in Barefoot College.

Barefoot College is a nongovernment organization (NGO) catering to the basic needs of rural communities in India and other underdeveloped countries for the past 40 years now.

It has been teaching communities “solar electrification” apart from offering them clean water, education and livelihood.

Diwata-Women in Resource Development Inc., an NGO, partnered with the Embassy of India, Land Rover Club of the Philippines, and the Philippine Mine Safety and Environment Association in launching Barefoot College in the country on May 8.

Dubbed “Tanging Tanglaw: Turning IP Grandmothers into Solar Engineers,” the program has been successfully launched in South Africa and other parts of the world.

“The founder of Barefoot College, Bunker Roy, believes that training women, who normally take care of their family, stay in their communities,” lawyer Patricia Bunye, president of Diwata-Women in Resource Development, said.

“These women have to go back to be the ones to make solar panels and maintain and repair them,” Bunye said.

The Indian government will shoulder all the expenses of the Aeta women, from airfare to lodging and food.

Diwata and other partner organizations employed a stringent process of qualification in choosing a candidate for the program. They are the ones that will identify sources of funds for the purchase of equipment, which will be installed by the grandmothers in their communities.

“Grandmothers are chosen for this program to ensure not only acceptability of the program, but more importantly its sustainability,” Bunye said.

In the case of Clemente’s village at Sitio (settlement) Gala in Zambales, P2.6 million worth of solar panels that can light up 100 houses for five years will be installed upon their return.

“We hope that when we get back, there’s already power supply in our village,” Clemente said.

Unable to finish grade school, Clemente said she was both excited and scared.

“We are nervous because we don’t know much. This is our first time outside the country. We don’t know what to do,” Clemente said as the four of them were about to board a Cathay Pacific flight to New Delhi.

But the Aeta grandmother was optimistic that the people there would help them out.

“Our goal is to go back and be able to help the people in our barrio,” she said.

Language, Bunye said, would not be a barrier, since Barefoot College was known as an institution teaching its students by doing.

After six months, the four Aeta grandmothers will be in charge of maintaining the solar panels and leading the communities for the project’s sustainability.

“The money they would have used for kerosene lamps has to be set aside in a fund. The money will then be used to buy a set of solar panels in the future,” Bunye said, speaking about how the project will be made sustainable.

Three other members of Indigenous Peoples in the Philippines will be sent to India sometime in March next year.