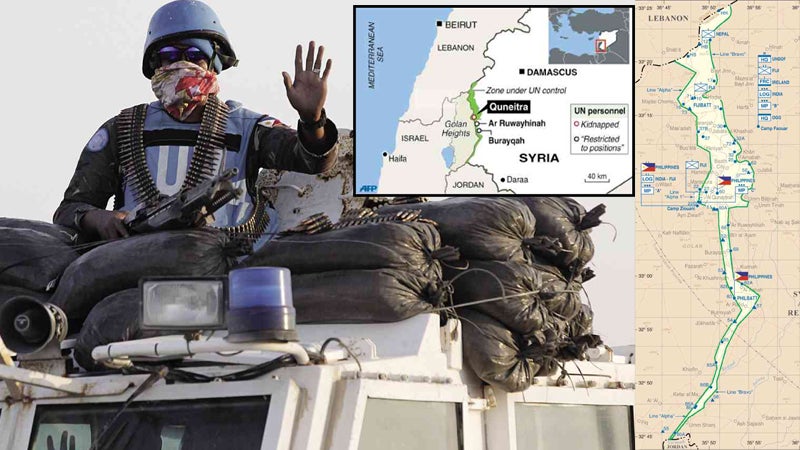 BORDER CROSSING A Filipino member of the United Nations Disengagement Observer Force waves as his armored vehicle passes the Israel-annexed Golan Heights near Quneitra, the only border crossing between Israel and Syria (inset: map). UN peacekeepers caught up in heavy fighting on the Golan Heights were evacuated as the fate of 44 of their Fijian colleagues captured by Syrian rebels remained uncertain. AFP

The getaway, combined with the departure of another entrapped group of Filipino troops, marked a major step forward in a crisis that erupted on Thursday when Syrian rebels began targeting the peacekeeping forces. The United Nations Security Council has condemned the assaults on the international troops monitoring the Syrian-Israeli frontier, and has demanded the unconditional release of those still in captivity.

The crisis began after Syrian rebels overran the Quneitra crossing—located on the de facto border between Syrian- and Israeli-controlled parts of the Golan Heights—on Wednesday. A day later, insurgents from the al-Qaida-affiliated Nusra Front seized the Fijian peacekeepers and surrounded their Filipino colleagues, demanding they surrender.

The Filipinos, occupying two UN encampments, refused and fought the rebels Saturday. The first group of 35 peacekeepers was then successfully escorted out of a UN encampment in Breiqa by Irish and Filipino forces on board armored vehicles.

The remaining 40 peacekeepers were besieged at the second encampment, called Rwihana, by more than 100 gunmen who rammed the camp’s gates with their trucks and fired mortar rounds. The Filipinos returned fire in self-defense, Philippine military officials said.

Outnumbered by not outfought

At one point, Syrian government forces fired artillery rounds from a distance to prevent the Filipino peacekeepers from being overwhelmed, said Col. Roberto Ancan, a Philippine military official who helped monitor the tense standoff from the Philippine capital, Manila, and mobilize support for the besieged troops.

“Although they were surrounded and outnumbered, they held their ground for seven hours,” Philippine military chief Gen. Gregorio Pio Catapang said, adding that there were no Filipino casualties. “We commend our soldiers for exhibiting resolve even while under heavy fire.”

As night fell and a ceasefire took hold, the 40 Filipinos fled with their weapons, traveling across the chilly hills for nearly two hours before meeting up with other UN forces, who escorted them to safety early Sunday, Philippine officials said.

“We may call it the greatest escape,” Catapang told reporters in Manila.

The Syrian and Israeli governments, along with the United States and Qatar, provided support, the Philippine military said without elaborating.

In New York, the United Nations Disengagement Observer Force, or UNDOF, whose mission is to monitor a 1974 disengagement in the Golan Heights between Israel and Syria, reported that shortly after midnight local time, during a ceasefire agreed with the armed elements, all 40 Filipino peacekeepers left their position and “arrived in a safe location one hour later.”

With the Filipinos now safe, full attention turned to the Fijians who remain in captivity.

UN Secretary-General Ban Ki-moon spoke with the Prime Minister of Fiji by telephone Sunday, and promised that the United Nations was “doing its utmost to obtain the unconditional and immediate release” of the Fijian peacekeepers, Ban’s office said.

Military Commander Brig. Gen. Mosese Tikoitoga also told reporters in the South Pacific island nation on Sunday that contacts on the ground in the Golan Heights have assured the military of the captured soldiers’ well-being, the report said.

He said a UN negotiation team and Fijians in Syria were working toward the peacekeepers’ release.

The Nusra Front, meanwhile, confirmed that it had seized the Fijians. In a statement posted online, the group published a photo showing what it said were the captured Fijians in their military uniforms along with 45 identification cards. The group said the men “are in a safe place and in good health, and everything they need in terms of food and medicine is given to them.”

It was unclear why the number of detained peacekeepers differed from the 44 figure provided by the United Nations.

The statement mentioned no demands or conditions for the peacekeepers’ release.

The Nusra Front accused the UN of doing nothing to help the Syrian people since the uprising against President Bashar Assad began in March 2011. It said the Fijians were seized in retaliation for the UN’s ignoring “the daily shedding of the Muslims’ blood in Syria” and even colluding with Assad’s army “to facilitate its movement to strike the vulnerable Muslims” through a buffer zone in the Golan Heights.

The Nusra Front recently seized hostages to exchange for prisoners detained in Syria and Lebanon.

Charles Lister, a visiting fellow at the Brookings Doha Center, said the abductions also may signal an expansion of Nusra’s kidnapping operations to make up for a loss of revenues from oil resources in eastern Syria and a reduction in private funding from Gulf-based sources.

“This money shortage comes amid a period of wider suffering for Nusra, as its image is being overwhelmingly trumped by the Islamic State, leading to sustained numbers of localized defections in areas of Syria,” he said.

The UN mission in the Golan Heights has 1,223 troops from six countries: Fiji, India, Ireland, Nepal, Netherlands and the Philippines. A number of countries have withdrawn their peacekeepers due to the escalating violence.

Philippine officials said Filipino forces would remain in Golan until their mission ends in October and not withdraw prematurely.

Both UN Secretary-General Ban Ki-moon and the Security Council strongly condemned Saturday’s attack on the peacekeepers’ positions and the ongoing detention of the Fijian peacekeepers.–Jim Gomez with Oliver Teves in Manila, Maamoun Youssef in Cairo, Rod McGuirk in Canberra and Peter Enav in Jerusalem