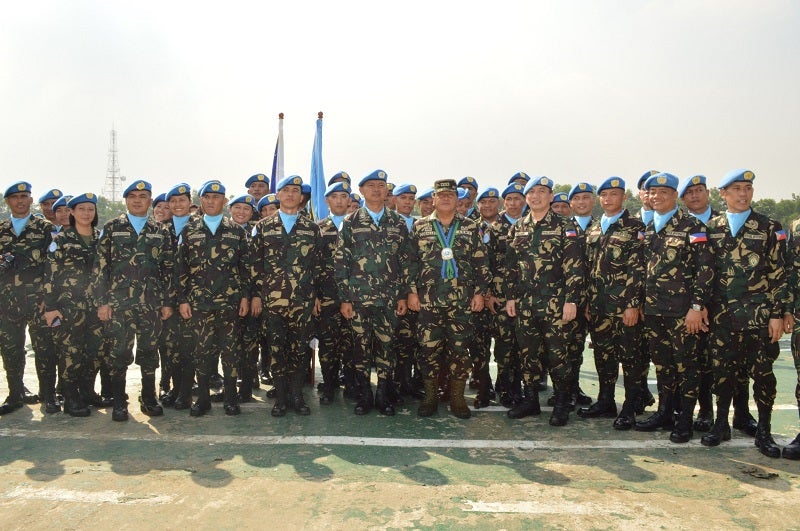 In this handout photo taken on October 2013 and released by Philippine Armed Forces public affairs office (AFP-PAO) on August 29, 2014 shows officers and men of the 7th Philippine peacekeeping force bound for the Golan Heights posing for photos during their send-off ceremony at the army heradquarters in Manila. Heavily armed Philippine peacekeepers defied Syrian rebels on August 29 in a Golan Heights standoff hours after the gunmen disarmed and took hostage 43 Fijian soldiers there, Filipino authorities said. AFP

“They have high morale,” Gazmin told reporters, referring to the group of Filipino peacekeepers defending Area Position 68 of the United Nations Disengagement Observer Force (Undof) on the Golan Heights.

The fire fight was going on between the Filipino peacekeepers and the rebels as of 5 p.m. in Manila.

Gazmin said the Filipinos had reported no casualties. He praised the elite troops’ courage and “high morale.”

A military official who asked not to be identified said the Filipino troops manning Area Positions 68 and 69 belonged to the Philippine Army’s elite Scout Rangers and Special Forces.

Gazmin said a second group of 35 Filipino peacekeepers manning Area Position 69 in the UN-controlled buffer zone between Israel and Syria were “extricated” after Syrian troops came to reinforce the Philippine troops when the rebels attacked at 6 a.m.

Irish peacekeepers, however, saved the Filipinos from “a massacre by securing an escape route” for them “near the Israeli-Syrian border,” the Mirror said.

The military official who asked for anonymity said the decision to extricate the Philippine forces from Area Position 69 was made by the Undof commander and not by the Philippine government.

Bishop Leopoldo Tumulak of the Military Ordinariate of the Philippines said a Filipino chaplain accompanied the Philippine contingent in Undof.

Tumulak, however, did not identify the chaplain.

He called on Filipinos to pray for their peacekeepers on the Golan Heights.

Rami Abdurrahman of the Britain-based Syrian Observatory for Human Rights also reported the fighting between the Filipino peacekeepers and the Syrian rebels on Saturday.

Abdurrahman, whose information comes from a network of activists throughout Syria, said he was not aware of any fatalities among the 40 Filipino peacekeepers in Area Position 68 in the Rwihana base of Undof.

The Filipino peacekeepers’ commander, Col. Roberto Ancan, chief of the peacekeeping operations division of the Armed Forces of the Philippines, said on Friday that the Filipinos were allowed to use “deadly force” to defend themselves and UN facilities on the Golan Heights.

Lt. Col. Ramon Zagala, spokesperson for the AFP, told reporters on Friday that the peacekeepers would not surrender.

“The Filipino peacekeepers are contributing to the United Nations for a more peaceful world. But when we are challenged, the warrior spirit in us will not make us surrender,” he said.

On Saturday, he told reporters that the Filipino peacekeepers were defending their position against the attacking rebels.

“There is an ongoing fire fight, but all Filipinos are safe,” he said.

Undersecretary of Defense for Operations Natalio Ecarma III told reporters on Friday that the Syrian rebels were most likely just after the Filipino peacekeepers’ weapons and provisions.

Defense and military officials were meeting at AFP headquarters on Saturday to assess the situation. The command conference was still going on as of 7 on Saturday night.

Malacañang said President Benigno Aquino III was receiving “round the clock” briefing on the events on the Golan Heights.

Presidential spokesperson Abigail Valte said the government was considering withdrawing the Philippine contingent from the Undof mission on the Golan Heights earlier than October as a result of the attack on the Filipino peacekeepers.

Last week, Mr. Aquino ordered the Philippine contingent withdrawn due to security concerns, but the troops would have to wait until the end of their tour of duty in October.

Mr. Aquino also ordered the repatriation “as soon as possible” of Filipino peacekeepers in Liberia to keep them from contracting Ebola, which had sickened more than 3,000 people and killed more than 1,500 in West Africa since March. With reports from Nikko Dizon, Tina G. Santos, AP and AFP