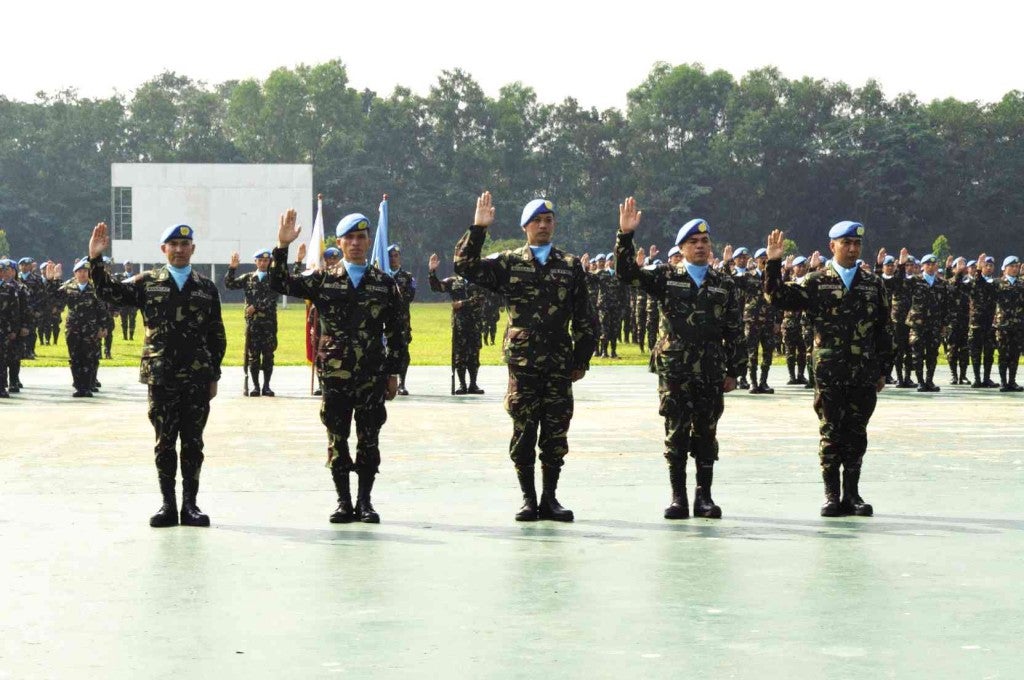 STANDING THEIR GROUND IN STANDOFF This handout photo taken in October 2013 shows the officers and men of the 7th Philippine peacekeeping force bound for Golan Heights during their sendoff ceremony at Army headquarters in Manila. The photo was released by the Armed Forces of the Philippines public affairs office on Friday, as news broke about heavily armed Filipino peacekeepers defying Syrian rebels in a stand-off at the Golan Heights hours after the gunmen disarmed and took hostage 43 Fijian soldiers. AFP

Seventy-five heavily armed Filipino peacekeepers besieged by Syrian rebels in the Golan Heights are ready to use “deadly force” to defend themselves, their commander said on Friday.

The Filipino peacekeepers locked in a standoff with Syrian rebels in the Golan Heights are “showing the world the courage of the Filipino spirit,” Malacañang said.

They have been holding their line in two camps at the United Nations-controlled Golan Heights since Thursday after rejecting a demand from Syrian rebels that they surrender their firearms.

The rebels have also taken 43 Fijian peacekeepers hostage after seizing their weapons.

“Because of the bravery of these troops, there is no way that these weapons will be pried from their hands,” said an Inquirer source who was privy to the monitoring of the situation in the Golan Heights.

Col. Roberto Ancan, the commander of the peacekeeping operations division of the Armed Forces of the Philippines, said no shots had been fired during the standoff, but that his troops were prepared to engage in combat.

“We can use deadly force in defense of the UN facilities,” Ancan said.

“I [would] just like to emphasize our troops are well-armed, well-trained … and well-disciplined warrior peacekeepers,” he said.

Lt. Col. Ramon Zagala, spokesperson for the Armed Forces of the Philippines, said that the Filipino soldiers would not surrender.

“The Filipino peacekeepers are contributing to the United Nations for a more peaceful world. But when we are challenged, the warrior spirit in us will not make us surrender,” Zagala said.

The standoff forced President Benigno Aquino III to cut short his visit to Mindoro Oriental province where he led the inauguration of several infrastructure projects on Friday.

“The plan was for me to try to be a tourist here in Mindoro Oriental tonight. That was the plan. But the truth is, I have been asked to return to Manila after this because you know, there is a slight problem in [the] Golan Heights with our peacekeepers. They are caught in the civil war happening in Syria,” President Aquino said as he began his speech.

But Mr. Aquino told his audience not to be anxious about the standoff because the “situation is stable.”

“Right now, while the situation is tense it appears there is no real danger, based on the report of the Department of National Defense to us,” he added.

Malacañang issued a statement praising the courage of the Filipino peacekeepers in the Golan Heights.

“It is our hope that this matter will be resolved in a safe manner in the soonest possible time. We join the rest of the world in praying for the safety of all the peacekeepers in the region, in particular our countrymen who continue to carry out their honorable duties. They are showing the world the courage of the Filipino spirit,” presidential spokesperson Edwin Lacierda said in the statement.

The 75 Filipino peacekeepers are part of the 346-strong Philippine contingent and they are all from the Army.

They serve in two platoons occupying two separate camps called Area Positions 68 and 69, about 4 kilometers apart and not far from the Fijian peacekeepers’ Area Position 28.

The Philippines condemned the Syrian rebels’ hostile action against UN peacekeepers and demanded the withdrawal of fighters surrounding UN-manned outposts in the Golan Heights.

“The Philippines also expressed great concern for the escalation of violence in the Golan Heights and condemns hostile actions directed against UN peacekeepers,” Charles Jose, spokesperson for the Department of Foreign Affairs (DFA), said in a statement.

“Our government, including our foreign mission in that region and at the UN headquarters in New York, is closely monitoring developments and is coordinating with the UN and concerned foreign governments to help bring about a peaceful resolution of this crisis,” he said.

The United States also condemned the rebels’ action against the UN detachment.

“This is a force that is responsible for peacekeeping around the world, and certainly we don’t think they should be a target of this type of efforts,” said Jen Psaki, spokesperson for the US state department.

Another Inquirer source said the report about the standoff reached the Department of National Defense and the AFP headquarters as soon as it began at 10 a.m. in the Golan Heights (5 p.m. in Manila).

The Inquirer sources requested anonymity, as they were not authorized to speak to journalists.

Held at AFP headquarters, the meeting started at 7 p.m. and lasted up to 1:30 a.m. yesterday.

President Aquino was given updates on the situation during the meeting, according to the second Inquirer source, who added that the standoff began when fighting between Syrian troops and the rebels erupted near the UN-occupied Golan Heights.

The peacekeepers were not the targets of the Syrian rebels but the shelling by the rebels reached the camp of the Fijian soldiers, who found themselves caught in the cross fire.

“The armed [Syrian] elements were able to seize the Fijian soldiers’ camp after the shelling. It was apparent that they only wanted the soldiers’ firearms,” the source said.

The rebels then proceeded to Positions 68 and 69, demanding that the Filipino troops give up their firearms as well. The Filipinos refused, triggering the standoff.

Asked if the government regretted not pulling out the Filipino contingent earlier, Zagala said, “No.”

“We do not regret our deployment to any UN mission. Our commitment to the UN as a nation is firm and supporting peace initiatives such as peacekeeping mission is a national priority,” Zagala said.

Only last week, President Aquino ordered the repatriation of the Filipino peacekeeping contingents in the Golan Heights and Liberia, citing security and health risks.

The pullout of the troops in Liberia was a precaution against the spread of Ebola in West Africa. (See In the Know.)

The withdrawal from the Golan Heights was triggered by the worsening civil war in Syria, putting the Filipino soldiers “at risk,” a government primer said at that time.

The primer said some members of the Philippine Battalion with the Undof had been injured while on vehicular patrols and their convoy was in the same area as a clash between Syrian soldiers and the rebels.

The government considered pulling out its contingent from the Undof in the Golan Heights last year following the two consecutive abductions of Filipino peacekeepers by Syrian rebels.

They were released unharmed. President Aquino decided not to pull out the troops from the Undof that time after a commitment made by the UN that they would be properly equipped in the Golan Heights, among other things, amid concerns that chemical weapons were being used in the civil war.

Undersecretary of Defense for Operations Natalio Ecarma III told reporters the UN was conducting “back channel talks” with supporters of the Syrian rebel groups for the release of the Fijian peacekeepers and the lifting of the siege on Undof Area Positions 68 and 69, occupied by the Filipino peacekeepers in the buffer zone between Israel and Syria in the Golan Heights.

Ecarma said the rebels gave the Filipino soldiers an ultimatum to surrender their weapons but the Filipinos refused and stood their ground.

“The rebels did not do anything so this may be a good indicator that they really do not mean what they say. We are hoping and praying that it will not escalate,” Ecarma said.

The rebels were most likely just after the peacekeepers’ weapons and provisions, he added.

“Potential for the deescalation of the situation is still positive,” Tutaan said.

The positions of the Filipino peacekeepers are well fortified, Tutaan said. The troops have protective equipment, including bulletproof vests and Kevlar helmets, he added.

The UN earlier said 81 Filipino peacekeepers were surrounded, but Ancan said there were only 40 Filipinos in one post and 35 in the other.

On Wednesday, Syrian rebels, including militants from the al-Nusra Front, stormed one section of the buffer zone and exchanged fire with Israeli troops.

A day later, the fighters captured 43 Fijian peacekeepers, forcing them to surrender their weapons then taking them hostage.

The rebels used an English-speaking Fijian hostage to relay their demand to the Filipino peacekeepers, who refused and stood their ground.

Last week, President Aquino ordered the withdrawal of the Philippine peacekeeping contingents to the Golan Heights and Ebola-hit Liberia because of security and health concerns.

Peter Paul Galvez, spokesperson for the defense department, said the government had not decided whether to pull out the Philippine contingent to the Golan Heights earlier as a result of the standoff.

“We still have to talk about that. There are processes to follow in the pullout. We cannot just pull out,” Galvez told reporters.

“What we have been fearing has happened. So I think it justifies the pullout. The situation has gotten worse,” he said.

But the Philippines’ commitment to the UN peacekeeping mission still stands, he added.

Israel seized 1,200 square kilometers of the Golan Heights during the 1967 Six-Day War, then annexed it in a move never recognized by the international community.

The UN peacekeeping force has been stationed there since 1974 to monitor the ceasefire between Israel and Syria.

There are currently 1,200 Undof peacekeepers from the Philippines, Fiji, India, Ireland, Nepal and the Netherlands. With reports from Niña Calleja, AFP and AP