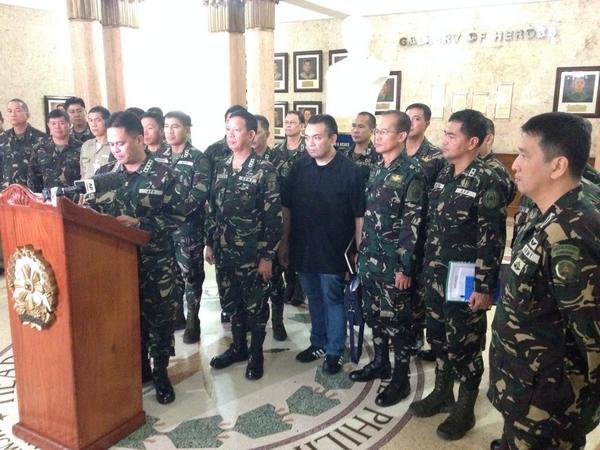 “Although [the troops] were outnumbered, we escaped from the rebels in the middle of the night while the rebels were sleeping,” Catapang said.

This was Catapang’s first crisis to face as chief of staff since he assumed office in July.

Top defense and military officials convened at Camp Aguinaldo to monitor the situation in Golan Heights around 10 a.m. on Saturday and finished at Sunday 7 a.m. 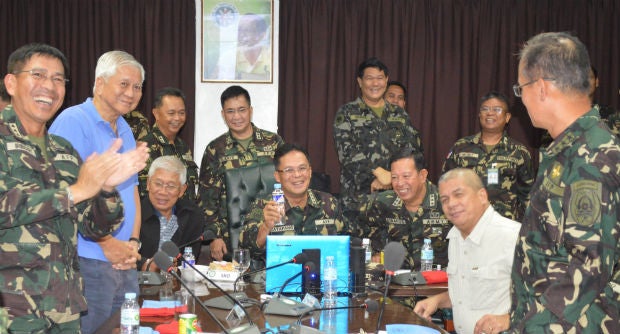 Top defense and military officials cheer at Camp Aguinaldo on Sunday, Aug. 31, after the successful repositioning of Filipino peacekeepers who figured in a standoff with Syrian rebels in Golan Heights. Photo by CPL Palima, CRS-AFP

In a separate interview, Catapang revealed that the peacekeepers were running out of ammunition as the fighting continued. But fighting ceased after seven hours (1p.m. Syria time/ 6p.m. Philippine time).

The military is still trying to confirm whether there were casualties from the rebels’ side.

The peacekeepers escaped about 12 midnight Syrian time (5 a.m. Sunday in Manila) with their weapons and personal belongings. After seven hours of fighting, there was a ceasefire and the peacekeepers found a chance to escape while the rebels were sleeping. They walked for about two kilometers in almost two hours where troops from Position 80 were waiting for them.

Syrian rebels, which included Al-Qaeda-affiliated Al Nusra Front, attacked Positions 68 and 69 on Saturday at 6 a.m. Syrian time (11 a.m. Manila time). Those on Position 69 were extricated shortly after but those on Position 68, with 40 Filipino peacekeepers, engaged in a firefight for seven hours.

The 40 peacekeepers from Position 68, with 38 enlisted personnel and two officers, fought about 100 rebels.

“There were no casualties from our troops,” Catapang said.

On Thursday, Syrian rebels abducted 43 Fijian peacekeepers after demanding to surrender their firearms. They tried to do the same with 72 Filipino peacekeepers in Positions 68 and 69 but they resisted to give up their firearms, which led to a standoff.

“The rebels attacked Position 68 first and only went to Position 69 after an hour but they were able to move immediately,” he said.

Syria also provided fire support during the fighting, which “eased the tensions” and prevented the rebels from getting closer to the troops. 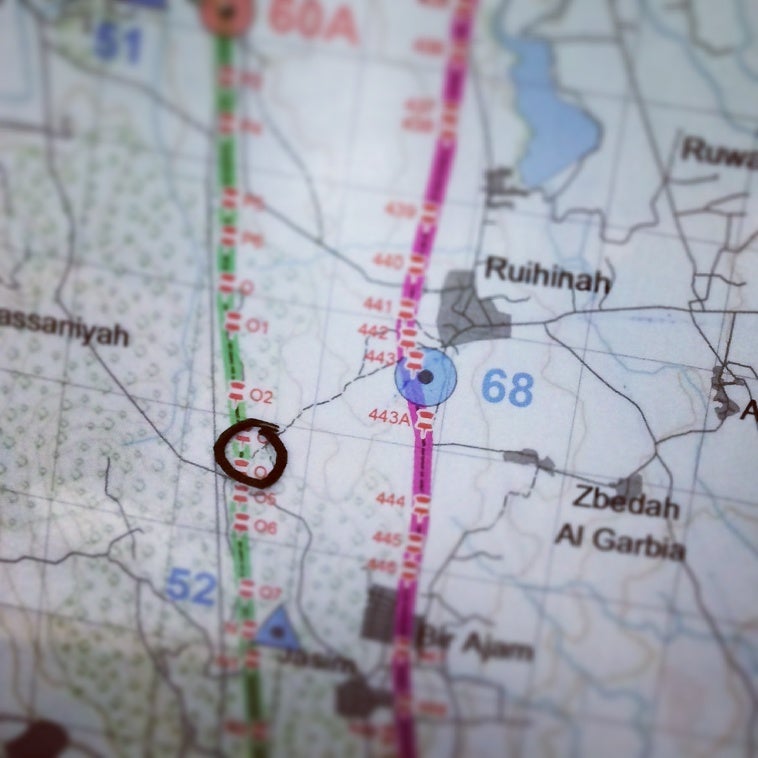 Filipino peacekeepers Position 68 walked 2.3 kilometers to a safe area where troops from Position 80 were waiting for them. Armed Forces of the Philippines Photo

Ancan also confirmed the report of an Irish publication that said peacekeepers from Ireland helped to escort out troops in Position 69 on Saturday.

“They have an armored personnel carrier but we were part of their escorts,” he said.

The rebels fired on them but the peacekeepers didn’t fire back and was able to evacuate.

PH peacekeepers all accounted for

Filipino peacekeepers from Positions 68 and 69 have been successfully repositioned to Camp Ziouani as of posting time. The US, Qatar and Israel also helped in the situation, the military said, but did not elaborate.

On Friday, 58 Filipino peacekeepers from Position 60 were moved to Camp Faouar as a precautionary measure. Positions 62, 80 and 85 are still occupied by Philippine troops.

As of July, there are over 1,200 peacekeepers from six countries serving in Golan Heights. The Philippines, which has about 300 peacekeepers deployed at present, has been sending contingents to Golan Heights since 2009 as part of its commitment to the UN.

Last week, the government has ordered the pullout of Filipino peacekeepers in Golan Heights due to heightened tensions there. Despite the incident, Catapang said that they would finish their tour of duty in October.