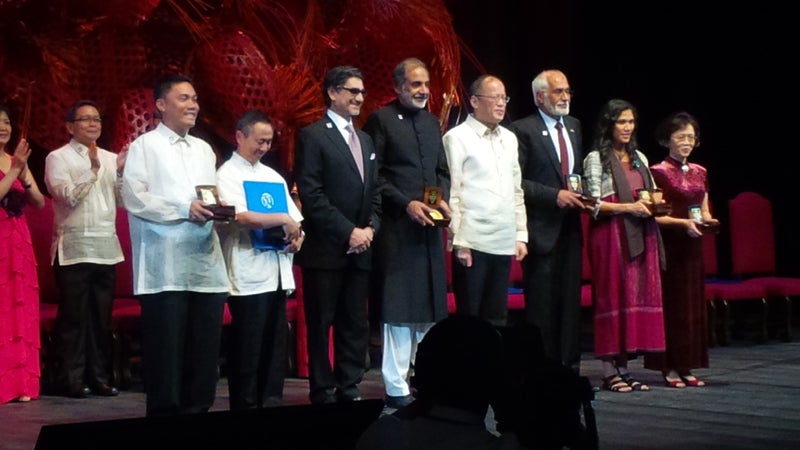 MANILA, Philippines—A Filipino teacher, four other individuals and an organization each bagged a Ramon Magsaysay Award on Sunday for their leadership and selfless service to others.

The Philippines’ Randy Halasan received the Ramon Magsaysay Award for Emergent Leadership, a category for outstanding leaders under the age of 40, for his work as a teacher in the hinterlands of Davao City.

Hu Shuli of China, Saur Marlina Marunong of Indonesia, Omara Khan Masoudi of Afghanistan, Wang Canfa of China, and The Citizens Foundation also received Asia’s equivalent of the Nobel Prize at the Cultural Center of the Philippines.

President Aquino graced the event and gave a message to the awardees.

Hu, a media practitioner from China, was cited for her “unassailable journalism, her fearless promotion of transparency and accountability in business and public governance, and her leadership in blazing the way for more professional and independent-minded media practices in China.”

Hu said that while Chinese journalists face “many obstacles,” “special moments” such as receiving a Ramon Magsaysay Award make their efforts worthwhile.

“Lending a voice to the unheard, illuminating a path where everyone is searching for direction…These moments never come easy but it will come [as long as you] never give up,” she said during her acceptance speech.

Manurung, on the other hand, is an anthropologist from Indonesia who formed a “Jungle School” for the indigenous peoples living in the country’s rainforests.

She said that although many people see her work as challenging and difficult, for her it is “like a dream” since she always wanted to work in the middle of the jungle like Indiana Jones. 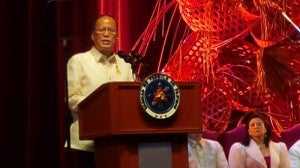 President Benigno Aquino III gives his message at the Ramon Magsaysay Awards rites in Manila on Sunday. Behind him is Inquirer CEO/Magsaysay trustee Sandy Prieto Romualdez. PHOTO by KRISTINE SABILLO/INQUIRER.net

Manurung, who has taught members of the Orang Rimba tribe how to compute and read so they may learn how to trade and make informed decisions, said indigenous peoples are often left out in dialogues that tackled their future.

“To all IP around the world I hope the time has come when you can represent yourself and determine your own faith,” she said.

Masoudi, who was recognized for courageously protecting Afghanistan’s cultural heritage amid Taliban rule, said the award was not for him alone but also his colleagues.

He said their work was dedicated to future generations of Afghans.

Like the other awardees, The Citizens Foundation was lauded for its work in education. The non-government organization was cited for its success in making quality education available to many children, regardless of class, in Pakistan.

From setting up a couple of schools in 1995, the organization, first set up by six Pakistani leaders, recently reached its milestone of having 1,000 schools.

“We see that there is much more good than bad in this world… [and that] There are innumerable people and NGOs working towards a better Pakistan,” the organization’s representative said.

“We dream to see a day where no child in Pakistan or elsewhere is deprived of quality education,” another representative added.

Protecting the environment through litigation, Chinese lawyer Wang and his Center for Legal Assistance to Pollution Victims has since filed more than 550 cases to hold companies accountable for destroying the environment.

“We will continue to try and play a greater role in environmental rights protection and rule of law in China,” he said.

“We have only one earth and environmental harm knows no boundaries; so I ask you, please, let’s all work together to protect our home planet,” he added.

Like Manurung, Halasan, the lone winner from the Philippines, was recognized for serving indigenous peoples.

Halasan has been teaching children from the Matigsalug tribe at the Pegalongan Elementary School in Davao City. In addition to pushing for the school’s expansion, the 31-year-old teacher has also spearheaded efforts to make the local community food-sufficient by encouraging the planting of fruit trees and vegetables.

He said he had wanted to become a lawyer or a doctor but was forced to take up education because of financial constraints after his father died.

When he was assigned to Pegalongan, most remote school in the province, Halasan said he immediately wanted to be transferred elsewhere.

“But as the day passed when I saw [the children and the residents]. I began to love who they are and their simple lives,” he said.

Halasan not only stayed to teach the children of the Matigsalug tribe, he also thought of ways to improve the situation of the farmers in the community by helping set up programs that allowed them to plant fruit trees and vegetables. He wanted the community to become food-sufficient to address hunger and poverty in the area.

“I truly believe that we can build a strong Philippines if we open our hearts to the people without expecting anything in return,” he said after accepting the award.

Read Next
Aid given to family of OFW beheaded in Libya – DFA
EDITORS' PICK
The Najima Drive: Nissan’s MD drives #GoAnywhere adventures in new video series
Signs of ASF infection show up in Davao del Sur town
Drilon joins Senate leaders’ move to question VFA abrogation before SC
Can travel make you fall in love?
Can Your Brand of Meat Be Trusted? Here’s How to Know You’re Eating Safe Meat
Xi’s early involvement in virus outbreak raises questions
MOST READ
2,000 iPhones given for free by Japanese gov’t to passengers stuck on ship due to coronavirus
WATCH: Sarah Geronimo dances ‘fierce’ version of ‘Tala’
Duterte can be greatest President yet – Joma Sison
Xi’s early involvement in virus outbreak raises questions
Don't miss out on the latest news and information.