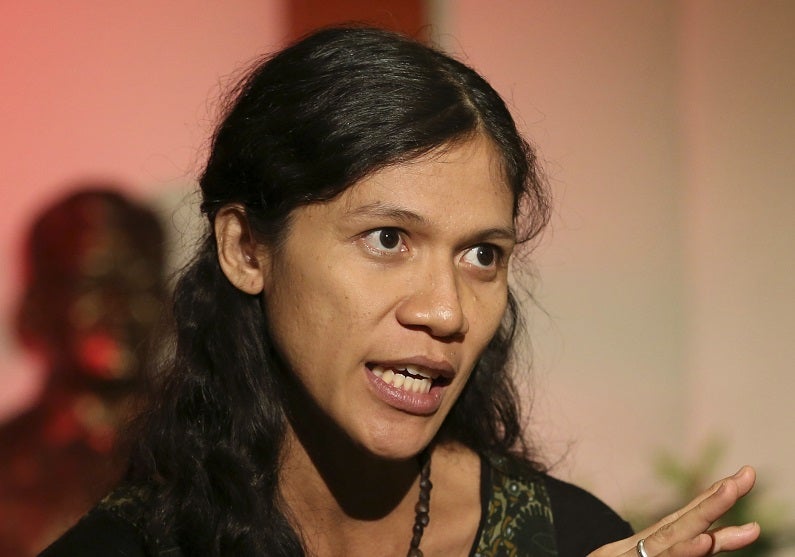 She will not forget the day 15 years ago when a little boy named Pengendum Tampung, a member of a tribe of hunters and gatherers known as the Orang Rimba, finally began to make sense of the strange characters that Saur had been teaching him to read for two weeks.

The 7-year-old Pengendum looked at the letters and uttered the two syllables of the word “buku,” which means “book” in Indonesian. His teacher smiled and told him: “That’s correct.”

The little boy was so happy, he climbed up a tree.

“He was shaking the tree and screaming to the whole forest: ‘I can read!’” Saur recalled, laughing.

It was at that moment that Saur—anthropologist, teacher, community worker, humanitarian, Time magazine’s Hero of Asia in 2004 and one of this year’s five recipients of the Ramon Magsaysay Award—said she truly felt that she was making a difference in the world.

Pengendum is only one of the 10,000 forest people who have been benefited by Sokola, an organization cofounded by Saur in 1999 to teach literacy and basic life skills to the Orang Rimba living in Bukit Duabelas National Park in Central Sumatra.

The Orang Rimba (literally “forest people”) has a population of about 3,500 divided into 11 groups and distributed across a 60,500-hectare forest in Jambi. They wear loin cloths, hunt for wild boar and deer, fish and forage for roots and tubers, according to the German-based humanitarian organization Terre des Hommes (TDH) Southeast Asia.

They are a “nomadic people with their own language, a matriarchal family system and an animist tradition, and have lived in complete isolation and in harmony with the forest and its abundant resources,” TDH said.

A  major Sokola program called Sokola Rimba, or “Jungle School,” was inspired by Saur’s experience as a teacher living and moving with the tribe as it traveled from place to place to hunt or gather food, according to Ramon Magsaysay Awards Foundation.

Sokola Rimba is not run like a regular school. Students are taught the 3Rs and other skills that they may need to survive against threats of encroachment, abuse and exploitation by outsiders.

“We call it a school for life, a school that benefits their lives directly,” she said.

Today, under Saur’s leadership as its director, Sokola has grown to 14 schools spread over 10 provinces throughout Indonesia, focusing on marginalized ethnic groups and funded primarily by private-sector donations.

In electing her to receive the 2014 Ramon Magsaysay Award, the foundation recognized Saur’s “ennobling passion to protect and improve the lives of Indonesia’s forest people, and her energizing leadership of volunteers in Sokola’s customized education program that is sensitive to the lifeways of indigenous communities and the development challenges they face.”

The 42-year-old anthropology and literature graduate arrived in Manila last week to personally receive the award at the presentation ceremonies to be held today.

She is eight-and-a-half months pregnant with her first baby with husband Kelvin James Milne, an Australian anthropologist. “The airline said that as long as I have a medical doctor, it’s fine,” Saur said.

She said her Filipino hosts had been suggesting names for the baby, whose gender she and her husband would prefer to be a surprise.

“Everyone gave me names. They said, ‘Ramon’ or ’Ramona,’” she said, alluding to Ramon Magsaysay, the Philippine president after whom the award is named. Asked if she was considering it, she said with a laugh: “Could be. I like the name.”

Saur, also known to Indonesians by her nickname Butet, said she still could not quite believe that she is now a recipient of the Magsaysay Award, considered to be Asia’s highest honor and its version of the Nobel prize.

“People are so enthusiastic. They congratulate me, posting on Facebook telling their friends that I’m a Magsaysay awardee, like ‘the Nobel prize of Asia.’ Even my grandmother had a newspaper with a headline about me. I still can’t believe that. Why, is it that big?” she said.

She said she was humbled and honored, and hoped that the award would help direct the world’s attention to Indonesia’s 40 million indigenous people facing all kinds of threats from outside, such as corporate greed and even government intervention.

But the hardest challenge for the forest people, she said, was the “mainstream perspective.”

This is the point of view of people in the mainstream, including the government, ordinary citizens, nongovernment organizations and business, that “in order to be civilized, to be considered human, you have to live the way we live.”

“I think this is the most dangerous threat because it happens everywhere in Indonesia. That is when they impose their perspective on these communities,” Saur said.

An even more dangerous mistake is when the indigenous folk begin to believe it, too, and force themselves to live differently. “They live their lives in the forest, then they try to live in the city,” she said.

“They cannot cope with the rule, the game of city people. In the city, you compete. Everything belongs to someone. Like, this table is mine, so you cannot touch it. Or this line is mine, so you get out of my line,” she said.

In the forest, however, everything is common and “collectively owned,” which makes it hard for the Orang Rimba to cope, she said.

The forest people also believe that every bit of food every day is provided by the gods. “So they cannot plant. They just collect and pick up what’s growing on the ground,” said Saur.

The Orang Rimba were initially resistant to Saur’s attempts to teach them.

The forest people even called pencils “evil with spiked eyes,” believing that evil started with them as a result of previous occasions they were cheated out of their land when they were made to sign contracts under false terms.

“Every time I came with a pen, they would run away. And unless I put my pen back into my bag, they would not come back,” she said.

At first, Saur said she felt it wasn’t a problem if the tribe did not have a problem with being illiterate.

But then she saw how the forest people would not survive if they did not compromise about their culture.

It was a struggle attempting to convince the forest community, Saur said.

For the first few months, she had little success getting the adults and children to trust her. But in the seventh month, something changed.

“After they talked among themselves, they came to me and said they need me to teach them. That was the turning point,” she said.

Saur said many of her former students are now community leaders and teachers themselves, including Pengendum, the boy who celebrated reading his first word by climbing a tree.

About three years ago, Saur said she found herself listening to her former pupil addressing a crowd of hundreds about the human rights of forest people.

It was a strange sight, said Saur, recalling how Pengendum was so scared of outsiders when she was teaching him in the jungle.

The boy had even been scared of airplanes. “He could not understand why a nonliving creature can move by itself. Every time he heard an airplane, he would hide,” Saur said.

But this confident, articulate Pengendum did not mean that he had “changed into the modern way,” said Saur.

Saur, who was born and raised in Jakarta, said her work with Indonesia’s forest people was a calling.

“Because I was born in Jakarta, I don’t have access at all to the wildlife but I always heard the calling. Every time I looked at the forest, even if it’s just a painting, my heart would race and I know that’s a calling. I think everyone can be a hero if they heard what their calling is,” she said.

When she teaches the Orang Rimba to read and write, “it’s not me that’s the hero because I do that for me,” Saur said.

“It’s actually to fill my own hunger. Otherwise, my life will not be peaceful. I cannot sleep,” she said.

“Many people asked me, ‘Why do you choose this path of life?’ And I always told them, ‘I keep asking myself as well.’ Now I found the answer. It’s the jungle that chose me, not me that chose the jungle,” she said.

Randy Halasan: The teacher from ‘place where light shines’

Bello: Kin of OFWs who died from COVID-19 to get P750K-P900K insurance benefits