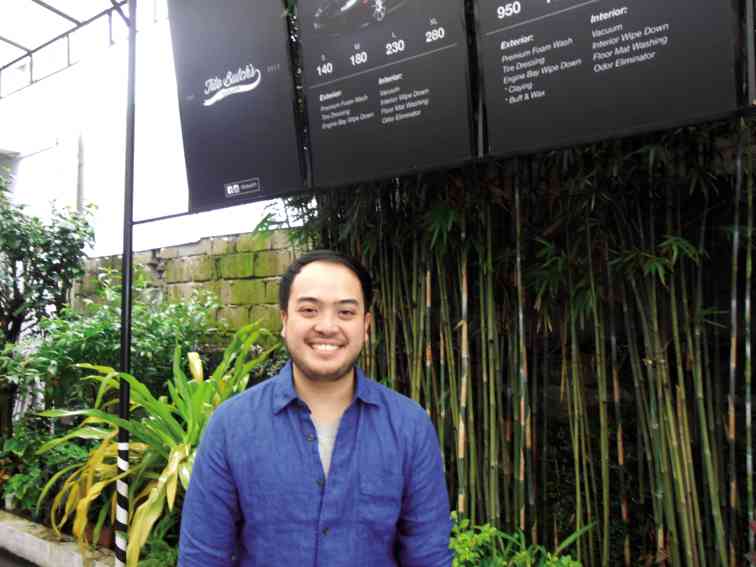 CHAD INDUCIL is one of the many young Filipinos raised abroad who wish to make their mark in the Philippines.

The newly opened Tito Butch’s Garage car-wash business (along the Sta. Rosa-Tagaytay highway) attempts to offer more than the usual washing and waxing service. It offers premium auto detailing services that include the application of car sealants by Sonax, a German brand. Right beside it is a bar café that offers Western-style burgers known as Egg Dip Burger and more recently, an all-day breakfast menu.

The enterprise is the idea of 28-year-old Filipino-Canadian Chad Inducil and his other Filipino-Canadian partner Toby Catral. Inducil migrated to Vancouver, Canada, when he was 15 years old. He finished his Bachelor of Arts and Bachelor of Business Administration from Simon Fraser University.

On why the family went abroad, Inducil answers, “Greener pastures which I don’t believe to be true anymore.  If you study in Canada, your world opens. Now that I’ve graduated from college, I say the greener pastures are here in Manila. A lot of my Filipino-Canadian friends want to come here for business.”

During and after college abroad, he dabbled in various business ventures that included Corporate Cycles where they serviced bikes for corporations. While the executives were at work, Inducil and his partners fixed the bikes of the employees who brought them to the office. In Canada, Inducil says there are many people who ride bikes going to work.

He also went into consulting for small businesses and into the delivery service known as Healthy Work Lifestyle where they brought fruit boxes to corporate offices. It was doing very well until he decided to return to the Philippines in 2011 to help in their family business, ATI Group Inc., an automotive machine shop. He mentions that the family business was struggling so he decided to come back while his parents remained in Canada. 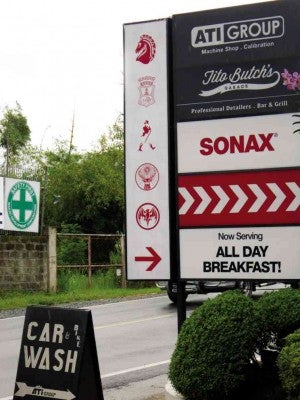 IDEA BECOMES REALITY A simple car-wash sign was eventually replaced with more professional signage after Chad Inducil decided to turn his ideas into a full-fledged business venture. He has no plans anytime soon of returning for good to Canada. PHOTOS MA. BY ESTHER SALCEDO-POSADAS

“Canada is a first world country. When you graduate there, you’re competing with the brightest minds in the world. Here I have an advantage. I’ve lived in a developed country and seen how it’s done there. I can bring the way things are done there over here,” he said.

Inducil adds that when he first came in, his family’s business clients were 80-percent buses and he has tried to diversify by adding new profit centers such as the calibration section and fuel additives. Eventually, Inducil found his own business venture through car wash and food service.

Inducil continues: “When I moved here, we would go out a lot. I didn’t want to spend my small salary at ATI. So I put a tent outside and put a sign. The earnings went into my fun fund. Then I realized that it was earning. In the beginning, I could buy one bottle of wine every two weeks from car wash earnings. Next month after that, I could buy a bottle of Jack Daniels every week. Then I realized it was a good cash flow business enough to invest some money and take it to another level.” It was at this point that he found another Filipino-Canadian partner to open the business.

“Canada is very safe. You can work full-time there. Get a house and do the daily routine. But it’s a boring life for my age. Many of my friends feel the same way.”  Inducil stresses that it is a common sentiment among Filipino-Canadians. “There was a time that every month, I always have a guest from Canada visiting and they always say the same thing—I want to live here.”

Inducil explains that the Canadian culture is quite liberal and may not be an ideal place to raise children. He suggests: “Raise your kids here until maybe high school, then move.” This way, there is lesser chance that they will lose their Filipino identity.

While he finds Filipino culture to be a bit clannish or full of cliques, he says that in Canada everyone is the same no matter how rich you are. Other things he has learned include the value of work. “You learn to be very independent there. You learn the value of money. You work for a buck. It’s stupid if you don’t get a job.”

Apart from his brick and mortar business, Inducil has also started an online social network known as Bumpables. He says that he had a hard time finding the right Filipino talent to complete the website without unnecessary delays. It is one of the things that he still needs to get used to working in the Philippines.

Nonetheless, Inducil has decided to stay in the country and explore opportunities, despite his mother’s regular queries on when he plans to return to Canada.

“My goal is to make something out of myself as an entrepreneur. If I go back, it will take me longer. Here, I can do it more quickly,” he explains.