Randy Halasan: The teacher from ‘place where light shines’ 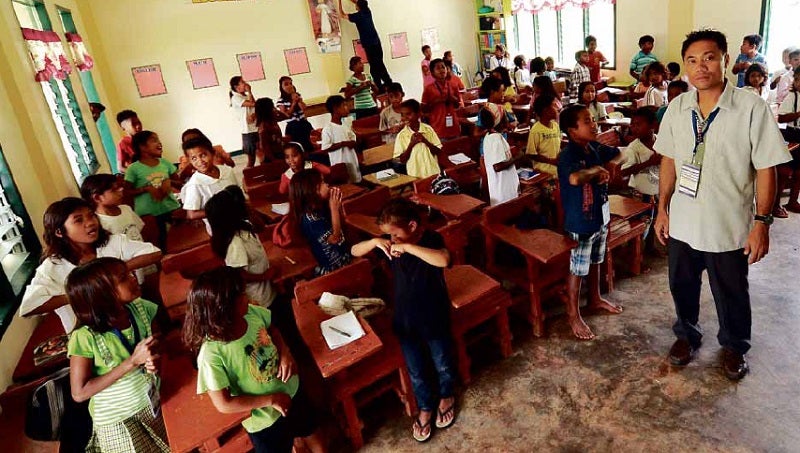 BRIDGING THE GAP Teacher Randy Halasan, who crosses the perilous waters of Sinod River and Davao River as part of a seven-hour trip to Pegalongan Elementary School in Davao City, says: “When you help, you don’t ask for anything in return. I never thought others would recognize our efforts.” CONTRIBUTED PHOTO

Building a bridge over the Sinod River and another over Davao River could help save lives, said Halasan who almost drowned while crossing the treacherous waters once, like the other teachers and students who must ford the rivers once a week as part of their seven-hour trek to school.

Also recognized by the RM Foundation was The Citizens Foundation based in Pakistan, for “the social vision and high-level professionalism of its founders and those who run its schools.”

Beyond call of duty

Halasan was cited for going beyond the call of duty to students at Pegalongan Elementary School by serving as a bridge between the Matigsalug community and government agencies. In the process, he helped the indigenous tribe overcome its isolation, helplessness and poverty.

The public school teacher said he was touched and surprised by the recognition given him by Asia’s most prestigious award for public service.

“I’m very happy because I never thought I would get another award. When you help, you don’t ask for anything in return. I never thought others would recognize our efforts,” he said.

During his trip to Manila in October last year to receive an award for being an exemplary public school teacher, Halasan said his priority had been to call attention to the Matigsalug tribe’s need for those two bridges.  He has since been following up the matter with the Department of Public Works and Highways (DPWH).

Halasan said the tribe had already secured a pledge from 1-BAP party-list Rep. Silvestre Bello III to include the bridges among the DPWH-funded projects.

“We were told (the project) had been approved,” he said.  “I’m following it up with the DPWH. I wish we can start it (soon),” he added.

Already, Halasan’s efforts to link the Matigsalug tribe to outside help and resources have begun to bear fruit.

From the two-room school building made of light materials that the then 25-year-old city-bred teacher had to make do with in 2007, the community now has a nine-room school made of concrete materials, where eight teachers handle 210 students.

The school also accepts high school students now, so Halasan’s pupils no longer have to drop out after their elementary education.

Through Halasan’s help, the Matigsalug community acquired a rice-and-corn mill, a seed bank, and horses for transporting their farm products.  The community also has a cattle dispersal project.  Its forest rehabilitation contract with the government had been expanded from 22 hectares to 100 hectares this year because of its successful tree-replanting program.

The unmarried teacher had recently been offered a choice to teach in any of the city’s three schools, but he said he no longer wishes to be reassigned elsewhere.

“I did not accept (the offer),” Halasan said.  “Things are very challenging (and the school is) not perfect. But I can see development and slowly, people are learning. We are getting help,” he added.

Halasan took two of his former high school students under his wing to help them get through college in the city, but only one had persevered and is graduating in March next year.  This is the first time a member of the tribe would graduate from college, he said.

The RM Awardee said he would share the good news with his students and the tribe on Monday when he returns to the school.

“I’m sure they will be very happy and very proud because whatever recognition I get is for all of us,” Halasan said. “The trials and challenges I’ve been through have not been easy,” he added.

Apparently, more challenges are waiting to be addressed.  The community still has no basic amenities including electricity and a cell phone signal, although Halasan said he is looking for ways to get electrical service for the group.

Aside from the bridges, this RM Awardee is also looking at giving  the community easy access to farming technology inputs, more cattle dispersal projects and an expanded greening project.  Looking for private donors for a school feeding program is also on his to-do list.

Until last year, his mother and sisters could not understand why Halasan opted to stay in the community and teach at its elementary school, and why he often didn’t come home for weeks on end and even during school break in the summer.

His family’s worries turned into pride and acceptance when Halasan was featured in a Davao newspaper last year.

Unfortunately, his mother won’t see him accept the prestigious Ramon Magsaysay Award on Aug. 31. She died on Feb. 25 this year. Halasan’s father died when he was in college.

But the Matigsalug community’s pride over his award was just as rewarding.  From his pupils, their parents and the tribal leaders, Halasan said the best comment he had received was “when they said I give them light and hope.”

According to oral tradition, the word “pegalongan” means “the place from which the light shines.”

Said Halasan: “I’m only an ordinary person. I never thought what I had given them was very significant, and that they will (never) forget me for as long as they live.”