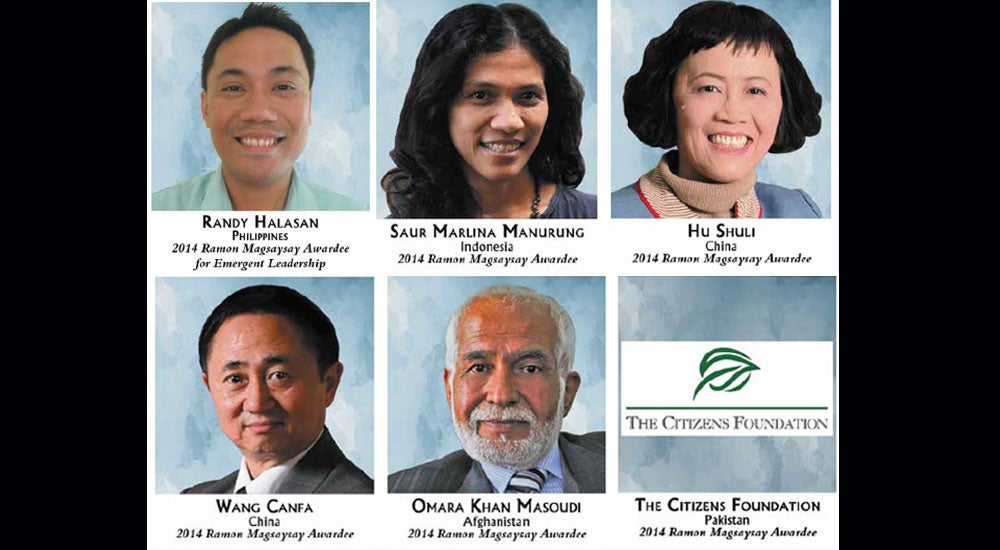 MANILA, Philippines–“No one got rich out of teaching; it’s your legacy that matters.”

A Filipino educator serving an indigenous tribe living in one of the remotest villages in Davao City is among this year’s recipients of the Ramon Magsaysay Award, regarded as Asia’s version of the Nobel Prize.

Randy Halasan, head teacher of Pegalongan Elementary School, will receive the award for his emergent leadership in “nurturing his Matigsalug [tribe] students and their community to transform their lives through quality education and sustainable livelihoods…” the Ramon Magsaysay Award Foundation said on Wednesday.

Obtaining his postgraduate and undergraduate degrees in Educational Management and Elementary Education, respectively, from the University of Southeastern Philippines, Halasan was assigned in Pegalongan in 2007 and had turned down offers of reassignment since then, despite the seven hours it takes to reach the village from his family’s home in the city.

Halasan, 32, has proactively lobbied for the expansion of the Pegalongan school, believing that education is key to the survival of the Matigsalug tribe in a changing world.

Aside from his education advocacy, he has inspired fellow teachers and villagers to create a food-sufficient community by planting fruit trees and vegetables. Now, Pegalongan farmers have a collectively owned rice and corn mill, a seed bank, a cattle dispersal project and a horse for transporting their produce.

Besides Halasan, other Magsaysay individual awardees for this year come from China, Indonesia and Afghanistan and one organization from Pakistan.

The award is named after the late Philippine President Ramon Magsaysay who died in a plane crash in 1957.

This year’s six awardees join the community of 301 other Magsaysay laureates to date.

The recipients will receive their awards—a certificate, a medallion bearing the image of Magsaysay, and a $50,000 cash prize each—in Manila on Aug. 31.

The award is given every year to individuals or organizations in Asia that deal with issues of human development in the region with courage and creativity and in doing so have made contributions that have transformed their respective societies, the RM Foundation said.

“Like other Magsaysay laureates before them, [this year’s awardees] have shown moral courage and impassioned insistence on making the societies that they serve better, kinder and more equitable for everyone, especially for the marginalized,” foundation president Carmencita Abella said in a statement.

Hu Shuli (China) is cited for “her unrelenting commitment to truthful, relevant and unassailable journalism, her fearless promotion of transparency and accountability in business and public governance and her leadership in blazing the way for more professional and independent-minded media practices in China.”

Hu comes from a distinguished family of journalists and her significant works in investigative journalism include exposés of the government cover-up of the extent of the epidemic severe acute respiratory syndrome (SARS) in 2003 and sale-for-adoption of children confiscated by family planning officials in Hunan province.

These reports led to the ousting of high public officials, prosecution of corporate leaders and reforms in China’s stock market, earning for the 61-year old Hu the name “the most dangerous woman in China” and her inclusion in the list of the “World’s 100 Most Powerful Women” of Forbes magazine this year.

Wang Canfa (China) is being honored for “his discerning and forceful leadership—through scholarly work, disciplined advocacy, and pro bono public interest litigation—in ensuring that the enlightened and competent practice of environmental law in China effectively protects the rights and lives of victims of environmental abuse, especially the poor and powerless.”

Wang, 55, founded the Center for Legal Assistance to Pollution Victims (CLAPV), the first of its kind in China, to focus on providing free legal aid to pollution victims. It has handled more than 13,000 environmental complaints and the legal victories of the agency have led to the suspension of some environmentally destructive projects and secured compensations for victims.

Saur Marlina Manurung (Indonesia) will receive the award for “her ennobling passion to protect and improve the lives of Indonesia’s forest people, and her energizing leadership of volunteers in [her group] Sokola’s customized education program that is sensitive to the lifeways of indigenous communities.”

Despite having been raised in a middle-class family in Jakarta and obtaining degrees in literature and anthropology, Manurung, 42, opted to devote her life to protecting and uplifting the lives of Indonesia’s “Orang Rimba,” or forest people.

She founded Sokola, a group of volunteer teachers and trained Orang Rimba youth, which provides basic literacy for children and practical skills to cope with the changing forest environment.

Omara Khan Masoudi (Afghanistan) will receive the award for “his courage, labor and leadership in protecting Afghan cultural heritage, rebuilding an institution vital for Afghanistan’s future.”

“A nation stays alive only when it can keep its history and culture alive,” Masoudi said. “I’m hopeful that our cuture can play a big role in creating space, in restoring national unity.”

Living in a country rich in ancient, cosmopolitan heritage of Hellenistic, Hindu, Buddhist and Islamic cultures, Masoudi, 66, launched a campaign for the restoration of historical monuments and the rebuilding of museums that were severely damaged by civil strife, bombings, looting and willful destruction by the Taliban.

The Citizens Foundation (TCF) of Pakistan is getting the award for “the social vision and high-level professionalism of its founders and those who run its schools, in successfully pursuing their conviction that, with sustained civic responsiveness, quality education is made available to all.”

A nonprofit organization, TCF was founded in 1995 by a group of six Pakistani business leaders “to remove barriers of class and privilege” through affordable, quality education for all.

To ensure access by the poor, tuition and other fees are heavily subsidized with 100 percent of TCF students covered by full or partial scholarships. Books and uniforms are provided free.