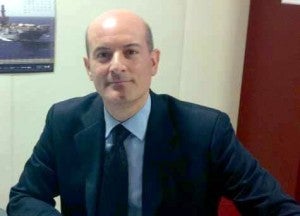 AMBASSADOR Daniele Bosio in a photo taken from the official website of the Italian Embassy in Ashgabat.

Accompanied by his legal counsel and his brother, Bosio was arraigned Wednesday afternoon before Judge Teodoro Solis at the Regional Trial Court Branch 25 in Biñan City, Laguna.

Also present at the arraignment were members of the non-government child rights group, Bahay Tuluyan Foundation, whose member had alerted the authorities and prompted the arrest of the diplomat at the Splash Island resort in Biñan City on April 8.

The foundation claimed their members saw Bosio “touching and caressing” the three young boys he was with at the resort. Bosio, the Italian ambassador to Turkmenistan, was on a holiday in the Philippines when he was arrested.

In a phone interview, Solis said the arraignment lasted less than an hour. “The arraignment was set at 2 p.m. but they (parties) were there around 1:45 (p.m.),” he said.

He said Bosio, who was wearing a suit at the arraignment, “looked just fine.”

The arraignment pushed through despite a petition, filed by the prosecution at the Supreme Court, to have the case transferred to Manila. Bosio’s camp, on the other hand, has a petition filed at the Department of Justice to have the case reviewed.

Bosio is on temporary release after posting a P900,000 bail in July.

The Biñan City police have confiscated Bosio’s passport to ensure he would not flee the Philippines.