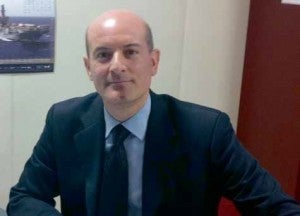 AMBASSADOR Daniele Bosio in a photo taken from the official website of the Italian Embassy in Ashgabat, Turkmenistan

CAMP PACIANO RIZAL, Laguna—An Italian diplomat is facing charges of trafficking and abuse of three underaged boys, whom he claimed were street children he had brought from Manila to a popular resort in Biñan City, Laguna, over the weekend.

Justice Secretary Leila de Lima said Bosio would be unable to invoke diplomatic immunity because he was not stationed in the Philippines.

“He is now in detention while his case is undergoing preliminary investigation with the fiscal (prosecutor),” De Lima told AFP.

Neither De Lima nor the local police would give details of the allegations against Bosio. She did not say how long the investigation would take.

The police report, e-mailed to the Inquirer yesterday by Laguna police director Senior Supt. Romulo Sapitula, said the victims were aged 9, 10 and 12, all from Caloocan City.

According to the police report, Lily Flordelis and Catherine Scerri, the executive and deputy director of Bahay Tuluyan Foundation, respectively, who happened to be at the resort, were alarmed at seeing the adult foreigner “touching and caressing” the children in the swimming pool.

Bahay Tuluyan is a nongovernment group promoting children’s rights with an office in Manila and shelters in Laguna and Quezon.

Not related at all

When asked how they were related, one of the children said Bosio was his father but another said they were not related at all.

Sensing something wrong, the foundation executives sought help from policemen at the resort who arrested Bosio. The diplomat told the police the street children had their parents’ permission to go with him.

Sapitula, in a phone interview, said the foreigner gave the children food and money.

“The children said they stayed at the foreigner’s house for two days before coming here (to Laguna). They said he (Bosio) bathed and scrubbed their bodies, but of course we know his intentions were something else,” Sapitula said.

The children were turned over to the Biñan City social welfare and development office, he said.

The police on Sunday charged Bosio with antitrafficking and child abuse. Child trafficking is a crime that carries a maximum penalty of 20 years imprisonment and a fine of at least P1 million.

Italian Ambassador to the Philippines Massimo Roscigno visited Bosio at the city jail on Sunday to ensure that legal assistance would be provided to the diplomat.

Visit from envoy to PH

The Italian Embassy in Manila was aware that Philippine police had taken the envoy into custody on a child-trafficking complaint, a Filipino embassy staffer said, but it did not immediately respond to a request for comment.

An official at the embassy initially said only the ambassador would comment on the matter, but subsequent phone calls to talk to him went unanswered.

The Italian foreign ministry in Rome did not immediately comment either.

According to the website of the Italian daily newspaper La Repubblica, the diplomat “rejects the accusation of violating Philippine law on protection of minors.” The website said that after the ambassador’s arrest, he looked “troubled.”

The website described Bosio as “a person close to children,” citing his involvement in organizing parties and financing the construction of a school.

Meanwhile, Sapitula said Bosio was being held together with other regular detainees. “No special treatment, of course,” he said.—With reports from AFP and AP