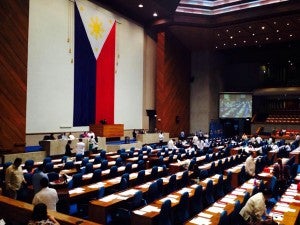 MANILA, Philippines–Want to marry a Filipina? Submit an employment certificate and a certificate of good moral character first.

A bill pending in the House of Representatives sets certain requirements before male foreigners can wed Filipino women.  The proposed legislation, according to the author, seeks to protect Filipino women from exploitation.

The House approved on second reading House Bill 2387 prescribing additional requirements for interracial unions after it received sponsorship in the committee on revision of laws chaired by Pangasinan Rep. Marlyn Primicias-Agabas.

The bill was a substitute for House Bill 2387 authored by Cebu Rep. Gwendolyn F. Garcia, who described her measure as protection against “vagabonds or social and moral derelicts in their own country” and whose real motive is to abuse Filipino women.

The original version amends Article 66 of the Civil Code, which requires foreigners to submit a certificate of legal capacity to contract marriage to be issued by diplomatic or consular officials.

The new version will revise Article 21 of the Family Code, a more recent law amending sections of the old one.

“The bill shall protect Filipino women against exploitation of foreigners who marry without evident means to support a family,” Primicias-Agabas said.

Garcia cited a need to protect Filipinas from foreigners whose “real motive for marriage is only to take advantage and exploit our women by making them work for the family and worse, by sending them to prostitution and other degrading and dehumanizing occupations.”

“The exploitation of our Filipino women, through the so-called mail-order or pen-pal, Facebook, website-made, and other internet-made marriages, has not only caused untold miseries and suffering to our Filipino women but it has also brought dishonor and disgrace to the Filipino womanhood,” she said.

The bill requires prospective foreign husbands to provide a certificate of good moral character and a certificate that he has a gainful trade, business, employment or other lawful source of incometo be issued by his country’s diplomatic or consular official.

The two new certificates are in addition to the existing requirement of a certificate of legal capacity.

Immigration cracks down on foreigners’ fake marriages to stay in PH