Why TPS matters even now 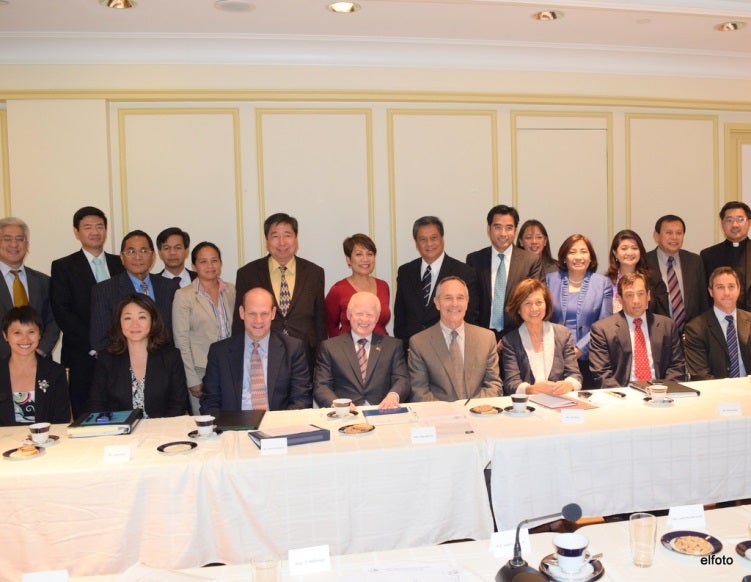 They are often referred to, half-jokingly, as TNTs, the Tagalog acronym for Tago ng Tago (hiding and hiding) or Takot na Takot (very afraid). But it is no laughing matter to be a Filipino out of lawful immigration status in the U.S., constantly hiding from immigration authorities and always anxiously fearful of being picked up and deported back to the Philippines.

They often work for the lowest wages as babysitters, domestic servants or caregivers, and reside with their employers if they’re lucky, or in cheap, overcrowded housing, if they’re not.

Some extraordinary TNTs like Jose Antonio Vargas even manage to acquire a decent education and win a Pulitzer Prize along the way. 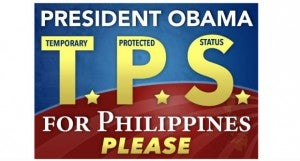 But despite their living conditions, abject or not, they all still manage to remit money back to their relatives in the Philippines.

The TNTs had pinned their hopes for legalization on the Comprehensive Immigration Reform Bill backed by Pres. Obama which passed the U.S. Senate (S. 744) on June 27, 2013 by a vote of 68-32. It would have offered legal status and a “path to citizenship” to the TNTs and the rest of the 11 million “illegals” in the U.S. But the immigration reform bill has languished in the Republican-controlled House of Representatives because of Republican fears that the bill’s beneficiaries would vote for Democrats once they become U.S. citizens, a self-fulfilling prophecy.

The only hope now for the TNTs is TPS – Temporary Protected Status – a humanitarian provision of U.S. immigration law that allows the Department of Homeland Security (DHS) – without the approval of Congress – to designate the citizens of a particular country, who are already in the U.S., for special benefits because of a natural or civil calamity in their home country. The benefits include protection from deportation, employment authorization and permission to visit their home country for emergency travel.

Despite all the natural calamities that have struck the Philippines in recent years, TPS was never requested until super typhoon Haiyan/Yolanda struck on November 8, 2013, the deadliest Philippine typhoon on record, killing at least 6,300 people. The storm carried the strongest wind speed in recorded history (195MPH). The storm surge caused catastrophic destruction in the Visayas, particularly in Samar and Leyte. According to UN officials, about 11 million people were severely affected.

The first call for the DHS to designate the Philippines for TPS came from the Washington DC-based Migrant Heritage Commission (MHC), which sent a letter to Pres. Obama on November 11, 2013 when the magnitude of the super typhoon’s damage was just beginning to emerge with photos of Tacloban eerily similar to those of Hiroshima and Nagasaki after the atom bombs were dropped on those cities.

As scenes of Haiyan’s catastrophic devastation flashed on TV screens throughout the US, a bipartisan group of 20 US Senators led by Sen. Robert Menendez (D-New Jersey) and Sen. Marco Rubio (R-Florida) joined the call for TPS to be granted to the Philippines. In their letter to Pres. Obama, they wrote: 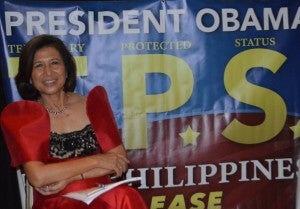 “Victims of Typhoon Haiyan clearly meet the eligibility requirements for TPS, and we urge you to extend this designation as soon as possible. The United States has demonstrated its commitment to assisting the Philippines with the recovery effort through foreign aid, military assistance and relief supplies, but we must also assist the victims’ families in whatever way possible.”

On November 21, 2013, Rep. Al Green (D-Texas) introduced H.R. 3602, the Filipino Temporary Protected Status Act of 2013, to express “the sense of Congress that the extraordinary and temporary conditions caused by flooding and other catastrophic damage wrought by Typhoon Haiyan in the Philippines qualifies the Philippines for designation under section 244 of the Immigration and Nationality Act, pursuant to which nationals of the Philippines would be eligible for temporary protected status in the United States”.

Over 200 Filipino American community organizations throughout the US endorsed the call for TPS for the Philippines including the National Federation of Filipino American Associations (NaFFAA), US Pinoys for Good Governance, the National Alliance of Filipino Concerns (NAFCON), the National Domestic Workers Alliance (NDWA), the Pilipino Workers Center and the Relief2Recovery Alliance. Fil-Am Republicans and Democrats set aside their partisan differences to support TPS for the Philippines.

The reason for this unparalleled unity is the economics of TPS: if 200,000 Filipino TNTs, who are already remitting $200 a month to the Philippines despite working poorly paid jobs, were to be granted employment authorization and able to work for the minimum wage of $9.00 an hour in California ($10.50 in San Francisco), they could easily remit at least $500 more a month to the Philippines. This would translate to $100 million a month or $1.2 billion a year. If there are 300,000 TNTs, as the DHS suspects, then the amount would rise to $150 million a month or $1.8 billion a year. It would be a gift that would just keep on giving.

In his legal memorandum submitted to the DHS, J.T. Mallonga of the Filipino American Legal Defense and Education Fund (FALDEF) explained that “remittances sent home by migrants to developing countries,” according to a study of the World Bank, “are equivalent to more than three times the size of official development assistance.” These remittances would add significantly to the $47.4 million of humanitarian aid pledged by the United States. With a U.N. Humanitarian Action Plan request of $301 million from the global community to rebuild the areas affected by Haiyan, remittances will contribute significantly to rebuilding efforts.”

On December 13, 2013, Philippine Amb. Jose L. Cuisa Jr. formally conveyed to Rand Beers, then acting Secretary of the US Department of Homeland Security, Pres. Aquino’s formal request for TPS to be granted to the Philippines. 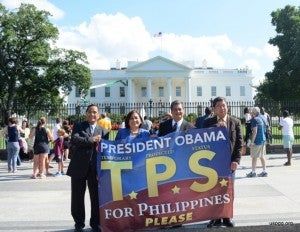 Ely and Evelyn Natividad from Chicago, JT Mallonga from New York, and Rodel Rodis from San Francisco in front of the White House

It was thought that TPS would be granted by January of 2014 but it did not.

DHS officials explained that protocol requires the U.S. Department of State to submit a recommendation to the DHS about granting TPS to the Philippines. The Filipino American community then issued a call to action asking the Filipino community to call the U.S. Department of State to leave a message for Secretary John Kerry to recommend TPS for the Philippines.

Thousands of Filipinos all over the US flooded the US State Department Switchboard supporting the call for TPS. By the end of February, 2014, the Filipino American community received word that Sec. Kerry had made a TPS recommendation to the DHS.

What is not known is whether Sec. Kerry had recommended “Full TPS” or “Partial TPS”. The first would cover all TNTs in the US; the second would only cover those who came from the islands devastated by Haiyan.

No one from the State Department or the DHS would divulge what Sec. Kerry’s recommendation was but it is not binding on the DHS. Even if Sec. Kerry recommended “Full TPS”, the DHS could still limit it to “Partial TPS” and vice versa.

So, more than 9 months after Haiyan, the decision remains with the DHS where it has been since February. With each passing month, hopes for TPS to be granted to the Philippines have grown dimmer. More countries have been devastated by war and violent conflict in the Middle East and by natural calamities in many parts of the globe, all of which may be pleading with the US for TPS. Will the US forget the Philippines?

But just when all hope seemed to be lost, on August 5, I received a call from Loida Nicolas-Lewis, national chair of US Pinoys for Good Governance and who had previously convened conference calls among groups supporting TPS for joint action, asking me to go the Philippine Embassy in Washington DC on August 13 to meet with officials of the DHS to discuss TPS.

Amb. Cuisia had been contacted by the DHS to set up a meeting with leaders of the Filipino American community to discuss TPS. Among other national leaders invited to the conference with the DHS at the Philippine Embassy in Washington DC were J.T. Mallonga, the newly-elected chair of the NaFFAA,  Arnedo Valera of the MHC, and Aquilina Soriano Versoza of the Relief2Recovery Coalition. 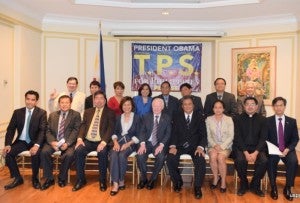 In his opening statement, Mr. Bersin, the DHS Chief Diplomatic Officer, said that he was personally requested by DHS Deputy Secretary Alejandro Mayorkas, the DHS Chief Operating Officer, to meet with the Filipino American community and engage in a dialogue about TPS.

“This is a matter that is under consideration by DHS Secretary Jeh Johnson. There are no specific deadlines but this does require the kind of outreach, time and consideration that it is being given,” Bersin said.

USCIS Director Leon Rodriguez added that the views expressed by the Filipino-American Community leaders would be helpful in their decision on the Philippine request for TPS.

In my remarks, I noted that Pres. Obama had sought $2.5 billion from the US Congress to deal with the DHS response to the 50,000 unaccompanied minors who had entered the US in the last 10 months. In contrast, I said, the DHS did not need to obtain congressional funding to deal with TPS for the Philippines. Each applicant would pay a total of $515 for the filing fees for TPS including $365 for employment authorization. For 200,000 applicants, that would add up to $103 million, more than enough to cover the additional administrative costs of DHS to process the TPS applications.

Director Rodriguez inquired if anyone knew how many of the potential TPS beneficiaries came from the islands devastated by Typhoon Haiyan. An estimate of 25% was given.

I said that limiting TPS to only those who came from the affected islands would fail to grasp the enormity of the Haiyan disaster which severely affected the resources and infrastructures of the islands that were not struck by Haiyan but had to absorb the millions who were displaced from the affected region. Furthermore, climate scientists predict that the Philippines will continue to receive the fiercest brunt of nature’s fury because of its location in the Pacific Ring of Fire. 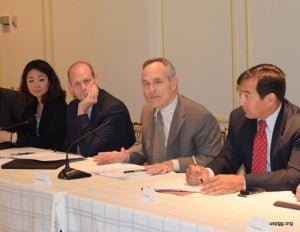 Loida Lewis added that the US should also consider the geopolitical circumstances where China is encroaching on and invading Philippine territories and the grant of TPS would send a message to China that the US will support the Philippines in every way possible.

Bersin replied that the DHS cannot take other matters into consideration, no matter how relevant and significant, other than what is dictated by the law.

I replied that, at the end of the day, TPS should be granted to the Philippines because Super typhoon Haiyan was the most powerful typhoon to devastate a nation in recorded world history. It was an environmental disaster without precedent.

With that comment, we ended our dialogue and shook hands with each other as we crossed our fingers hoping and praying that the DHS would grant TPS to the Philippines.

In Tagalog, TPS could very well stand for Tulong Para Sambayanan. (Help for the people).