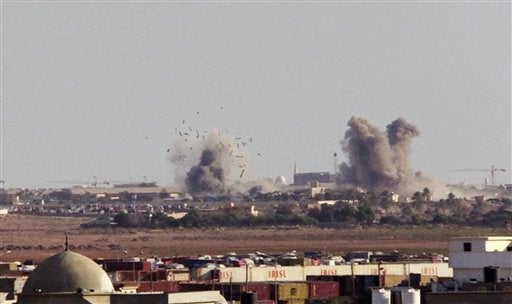 In this image made from AP video on Friday, Aug. 1, 2014, plumes of smoke and debris rise from a base of Islamic militias after a MiG fighter jet’s strike in Benghazi, Libya. AP

PIRAEUS, Greece—Libya is descending into a civil war spiral that is “much worse” than the unrest that toppled its dictator Moammar Gadhafi in 2011, residents fleeing the country said on Saturday.

“We have gone through [war] before, with Gadhafi, but now it’s much worse,” Paraskevi Athineou, a Greek woman living in Libya, told Agence France-Presse.

“Chaos reigns. There is no government, we have no food, no fuel, no water, no electricity for hours on end,” she said.

Athineou was part of a group of 186 people evacuated from Tripoli by a Greek Navy frigate, which reached the port of Piraeus early on Saturday.

In addition to 77 Greek nationals, there were 78 Chinese, 10 Britons, 12 Cypriots, 7 Belgians, 1 Albanian and a Russian.

Among them were several diplomats, including the Chinese ambassador to Libya.

Libya has suffered chronic insecurity since Gadhafi’s overthrow in 2011, with the new government unable to check militias that helped to remove him and facing a growing threat from Islamist groups.

“So many people died to make the country better. But now we started killing each other in a civil war,” said Osama Monsour, a 35-year-old employed at a nongovernment organization in Tripoli.

Fighting between rival militias in Tripoli has forced the closure of the city’s international airport, while Islamist groups are also battling Army special forces in the eastern city of Benghazi.

“War is in the city … and we civilians are under fire from both sides,” Athineou said.

“It is worse than 2011,” said Ali Gariani, a Libyan married to a Greek woman.