After the scarring, healing comes to Tubbataha | Global News

After the scarring, healing comes to Tubbataha 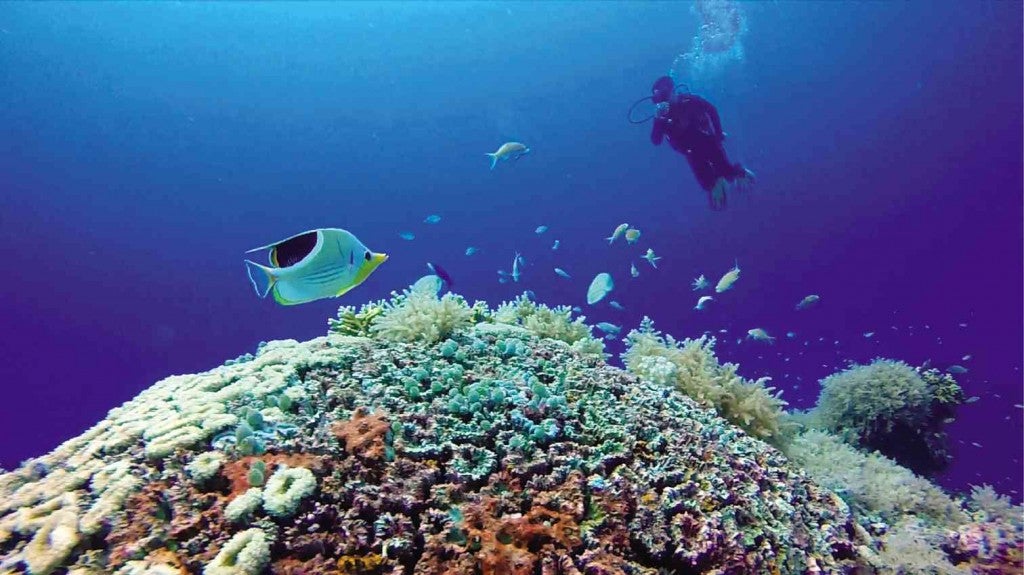 PAYBACK TIME Last year, a 68-meter US Navy warship ploughed into the Tubbataha Reefs South Atoll, home to the last 8,000 or so Philippine Black Noddies, which are critically endangered. After 73 days and $40 million to remove the 1,300-ton minesweeper, the South Atoll was 2,345 square meters poorer. A Chinese poaching vessel was next to intrude into the magnificent world of Tubbataha, obliterating 3,902 sq m of reef. The United States says it is willing to pay for damage but has not done so yet. The Chinese are inscrutable. GREGG YAN/CONTRIBUTOR

I never thought I’d sail to the middle of the Sulu Sea just to fly a kite. Soaring above our boat, it bucked and bobbed and played tag with the wind.

Secured 15 meters beneath the red kite’s head was a GoPro camera shooting aerials of North Atoll. Its images will soon help scientists understand the health of our seas.

Of course, we didn’t sail to Tubbataha just to fly kites. Together with the scientists and engineers of the Automated Rapid Reef Assessment System (Arras) team and Tubbataha Management Office, the World Wide Fund for Nature (WWF) has returned to check how last year’s ship grounding scars are healing.

On Jan. 17, 2013, the USS Guardian, a 68-meter-long US Navy warship, entered Tubbataha to accidentally plough into its South Atoll, home to the last 8,000 or so Philippine Black Noddies, which are critically endangered seabirds. It took 73 excruciating days and $45 million to slice and remove the 1,300-ton Avenger-class minesweeper from the reef. When the silt settled, Tubbataha South Atoll was 2,345 square meters of reef poorer.

Just eight days after the minesweeper was extracted, another vessel followed suit. On April 8, 2013, Tubbataha park rangers discovered the FV Min Long Yu, a 48-meter-long Chinese poachers’ vessel, floundering a 1.8 km east of the Ranger Station, part of Tubbataha’s North Atoll. By the time the craft was towed out 11 days later, another 3,902 square meters of reef had been obliterated. Worse, 2,870 endangered pangolins were found aboard—all dead.

United States Ambassador to the Philippines Philip Goldberg said last July 23 that the US government was ready to pay for the USS Guardian’s damage—about $1.5 million. China has remained mum about its grounding incident.

Eye in the sky

Arras employs three reef monitoring systems. The first uses a sports kite to provide bird’s-eye view images of sites. The second is called the teardrop, from the shape of the plexiglass housing for its camera. The last is the camera array—a 4-meter aluminum rig featuring a GPS and five downturned GoPros, taking continuous video of the seafloor.

At the heart of the Sulu Sea, 160 km southeast of Puerto Princesa in Palawan, are the twin atolls of Tubbataha—magnificent worlds brimming with wealth both beneath and beyond the blue. Born of undersea volcanic eruptions more than 15 million years ago, the islets within the 97,030-hectare Natural Marine Park have become the most productive marine systems in the Philippines.

More than 600 types of fish—ranging from the fingernail-sized pygmy seahorse to the occasional tiger shark—patrol coral-coated slopes and dramatic drop-offs adorned by gorgonians.

Anything that has fins would probably hang out in Tubbataha.

All this biodiversity translates to food productivity. Whereas a typical square kilometer of healthy coral reef annually yields up to 65 metric tons of fish yearly, Tubbataha generates over 200. Fishing within the park is not allowed but the larval dispersal effects continually seed the far reaches of the Sulu Sea with fish and invertebrate spawn.

Life for the denizens of Tubbataha flowed and ebbed as it had for generations—until last year.

Excitedly, we reel in the kite and recover the camera, knowing that each picture of the twin grounding scars is worth a thousand words.

(The author is the communications and media manager of World Wide Fund-Philippines.)

It is a marine sanctuary protected as the Tubbataha Reefs Natural Park, covering almost 97,030 hectares of high-quality marine habitats supporting more than 350 species of corals and almost 500 species of fish.

The site is a haven to whales, dolphins, sharks, turtles and Napoleon wrasse. It also protects one of the few remaining colonies of breeding seabirds in the region.

In 1993, the United Nations Educational, Scientific and Cultural Organization (Unesco) declared the park a World Heritage site. It is administered as part of Cagayancillo, Palawan, and is under the protective management of the Department of National Defense.

In 1999, in response to overfishing, poaching and exploitation, the Palawan Council formed the 19-person Tubbataha Protected Area Management Board for Sustainable Development to conserve, manage and preserve the resources of Tubbataha.

In April 2010, Republic Act No. 10067, or the Tubbataha Reefs Natural Park Act, was enacted to ensure the conservation and preservation of the sanctuary.

“Tubbataha has demonstrated that with carefully planned management, local communities need not bear the burden of closed protected areas, but can be their primary beneficiaries; as a nursery site for fish, the reef supports local artisanal fisheries,” the WFC said in a statement.

On Jan. 17 last year, the Avenger-class minehunter USS Guardian ran aground on the south atoll of the Tubbataha Reefs, which is sailing to Indonesia following a port call on Subic Bay.

The grounding damaged 2,345 square meters of coral on the reefs, a Unesco World Heritage site in the middle of Sulu Sea.

It can take 10,000 years for damaged corals to fully regrow, says Hontiveros