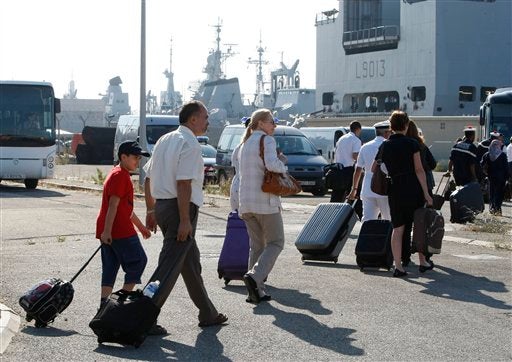 The Libyan labor ministry has eased the evacuation of overseas Filipino workers (OFWs) from the war-torn country by waiving exit visas, but health authorities warned of a “total collapse” of Libya’s healthcare system if hospital staff, mostly Filipinos, are pushed out by the chaos plaguing the North African country.

Multinational companies in Libya have launched a “shame Philippines” campaign to pressure the Philippine government to lift a travel ban to Libya because they need a steady flow of workers there, two officials from the Department of Foreign Affairs (DFA) told the House foreign affairs committee on Wednesday.

The rush to evacuate the Filipino migrant workers came on Thursday after the Philippine Embassy in Tripoli confirmed that a Filipino nurse had been abducted and gang-raped in the Libyan capital.

The report followed the discovery on July 20 of the beheaded body of a Filipino construction worker who had been kidnapped in the eastern city of Benghazi.

Hundreds of Filipino doctors and nurses in Tripoli’s Medical Center walked out on Wednesday in protest at the savage attack on their colleague, unleashing anarchy in the hospital.

More than 3,000 health workers from the Philippines, making up 60 percent of Libya’s hospital staff, could leave along with workers from India, who account for another 20 percent.

Libyan hospitals are flooded with a wave of admissions, victims of the fighting that has shaken the capital and Benghazi.

In the Libyan capital Tripoli, at least 102 people have been killed and 452 wounded in the clashes that began on July 13, the health ministry said on Wednesday.

It said 77 people have been killed and 289 wounded in violence in Benghazi.

“Hospitals could be paralyzed” in the event of the mass departure of Filipino health workers, Libyan health ministry spokesperson Ammar Mohammed said, while authorities warned of a possible “total collapse” of the healthcare system.

A medical official said the ministry was trying to persuade the Filipinos to stay. 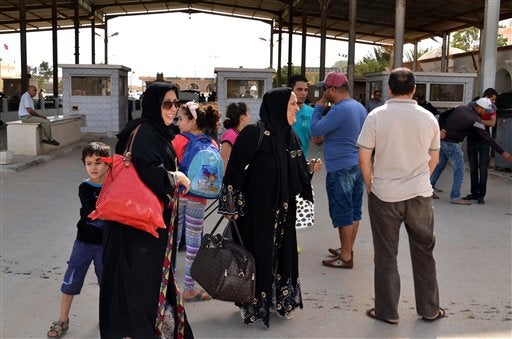 Labor Secretary Rosalinda Baldoz on Friday announced the exit visa waiver authorized by the Libyan labor ministry, allowing the Philippine Overseas Labor Office to repatriate more than 13,000 Filipino workers in Libya without negotiating with their employers.

Baldoz said in a statement that the waiver meant that Filipino workers who wanted to accept mandatory repatriation need not beg their employers to allow them to leave.

Baldoz said the labor department had received reports that the situation in Tripoli continued to deteriorate.

He said migrants not staying at the Filipino Workers Resource Center had signed up for repatriation.

Mustafa sent a list of 722 Filipino workers who had signed up to be taken back home. He said 549 of the migrants had actually left Libya for the Philippines.

The DFA has evacuated its noncore staff in the Tripoli embassy to Tunisia.

Manila has imposed a travel ban to the North African country, which has been plagued by violence since the fall of Moammar Gadhafi three years ago.

But at a hearing called by the House foreign affairs committee, Assistant Foreign Secretary Julius Torres and Special Foreign Assistant Renato Villa said the Philippine government had been under a lot of pressure from multinational companies not to impose a ban, as they needed a steady flow of workers.

“There has been a shame Philippines campaign on the part of the multinationals because of the deployment ban,” Akbayan Rep. Walden Bello told reporters on Friday, quoting the two DFA officials.

Bello said the DFA officials told the committee that the government imposed the ban in June.

He said the signal from the Philippine Embassy in Tripoli for the evacuation of the Filipino workers may have come too late, as other countries evacuated their citizens months earlier.

Bello laid the blame for the emergency on the DFA’s doorstep, saying the department’s slowness to act led to the perilous situation now faced by Filipinos in Libya.

He described Foreign Secretary Albert del Rosario’s trip to Tunisia to lead the evacuation as “mock heroics,” as Baldoz could have prevented the emergency situation by ordering the repatriation of Filipino workers more promptly and imposing a travel ban earlier.

The government evacuated 10,000 Filipino migrants from Libya in 2011, at the height of the uprising that led to the Gadhafi’s fall, and imposed a travel ban. 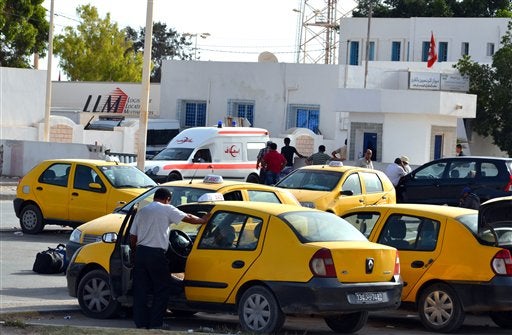 Tunisian taxi drivers wait for clients fleeing from Libya at the Ras Ajdir border post between Libya and Tunisia, southern Tunisia, Thursday, July 31, 2014. Up to 6,000 people a day have fled Libya into neighboring Tunisia this week, the Tunisian foreign minister said Wednesday, the biggest influx since Libya’s 2011 civil war in a sign of the spiraling turmoil as rival militias battle over control of the airport in the capital Tripoli. AP

But the DFA lifted the ban after Gadhafi’s fall in October 2011, although the hostilities had not yet ceased, Bello said.

From 2012 to 2013, most of the 10,000 repatriated Filipino migrant workers returned to Libya and even more migrants were deployed there, he said.

Bello said it was disturbing that the government did not stop deploying migrant workers to Libya even after it had become clear that the Libyan government had “collapsed” and that the Filipino workers there would be trapped.

So now the rush.

Del Rosario left for Tunisia on Thursday to organize an evacuation as fighting resumed between militias seeking to control the Libyan capital’s crippled international airport.

Del Rosario said he was repeating a 2011 mission that evacuated thousands of Filipino workers during the uprising that toppled Gadhafi.

“Our major challenge, as in 2011, is to convince our folks that they must leave Libya at the soonest time to avoid the perils of a highly exacerbating situation there,” Del Rosario said.

Despite the dangers, Del Rosario said many of the 13,000 Filipinos in Libya, mostly construction and health workers, refused to leave because they would be unemployed back home.

Only a few more than 700 had left Libya by Wednesday, despite the rapidly deteriorating situation, as warring factions battle for control of key population centers.

Del Rosario said he was flying to Tunisia’s Djerba Island to “try to convince our people to leave [Libya] because the situation there is very dangerous.”

“We are in the process of engaging ships from Malta that would pick up our people from Benghazi, Misrata and hopefully Tripoli then return to Malta for air transport to Manila,” Del Rosario said.

While each vessel could carry up to 1,500 people, he said the government was still negotiating safe passage through these ports.

Failing that, the Filipino workers would be bussed to Tunisia, where flight arrangements would be made, he said.

On Thursday, Islamic hardline militias, including the group accused by the United States in a 2012 attack that killed the ambassador and other Americans, claimed control of Benghazi after overrunning Army barracks and seizing heavy weapons.

In Tripoli, fighting between rival militias escalated, prompting foreign governments to scramble to get their citizens out and sending thousands of Libyans fleeing across the border into Tunisia. With reports from AFP and AP

Bello: Kin of OFWs who died from COVID-19 to get P750K-P900K insurance benefits

French presidency says PM Philippe and his government have resigned