DFA: Only a fraction have left since gov’t advisory
By: Niña P. Calleja - @inquirerdotnet
Philippine Daily Inquirer / 02:28 AM August 03, 2014 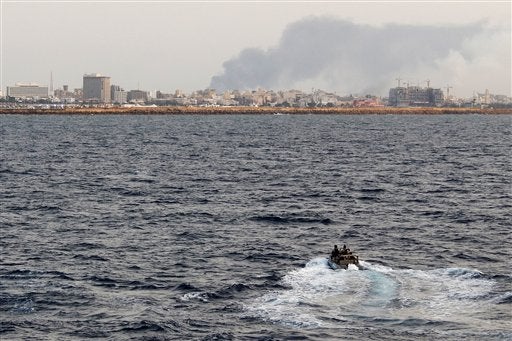 In this handout photo provided by the Hellenic Navy, a navy special operations team inspects waters as a plume of smoke is seen over Libya’s capital Tripoli on Thursday, July 31, 2014. A Greek frigate was used to evacuate Greek embassy staff and others from Tripoli. AP

Thousands of Filipino overseas workers refuse to leave strife-torn Libya despite an urgent call from their government to get out while they still can, warning that the remaining exit routes are closing fast.

The Department of Foreign Affairs (DFA) issued a statement on Saturday saying it aimed to get all of the more than 13,000 Filipino workers out of Libya after Foreign Secretary Albert del Rosario, in neighboring Tunisia to coordinate evacuations, reported that the Tunisia-Libya main border crossing was closed on Friday following the shooting of a Tunisian police officer there during violence that erupted as thousands of stranded Egyptian and foreign nationals tried to break through the passage.

A border crossing to Egypt has also been closed for months, Del Rosario said.

“This narrowed our options. All the major airports in Libya are closed. Our only avenue would be to take the ocean, which necessitates ships,” Del Rosario said by phone on Saturday.

In the statement issued by the DFA on Saturday, Del Rosario urged Filipinos to leave Libya, convince their friends and fellow workers to accept the government’s repatriation offer and get out now, as the remaining exit routes were closing fast with the escalation of violence and lawlessness.

Del Rosario said that in addition to the 800 Filipinos who had been repatriated, 800 others had been listed as willing to be flown back to Manila.

As for the rest, Del Rosario said: “We are having the same problem that we had in 2011. It’s difficult to convince people to leave.”

He said most of the Filipino migrant workers were reluctant to leave because they feared they would be jobless back home.

But he stressed the urgency of the need to leave Libya now, “as the avenues of repatriation are quickly diminishing.”

He said around 50 Filipino workers from Tripoli who were about to cross the border to Tunisia on Friday night were stranded there along with other foreign nationals after the Tunisian government shut down the passage due to the violence.

Del Rosario said the Tunisian government blamed the violence on the Egyptians, who tried to force their way in.

But the Filipinos managed to cross the border and they reached the Philippine Embassy in Tunis on Saturday morning (Tunisian time) after the Philippine government secured a “special dispensation” from the Tunisian government, Del Rosario said.

“What we [did] was get in touch with the senior officials [at] the foreign ministry of Tunisia. I asked for a special dispensation for our people,” he said.

“Our people were cleared and they are now safe,” he added.

The Filipinos had traveled 18 hours from Tripoli to the border and they had decided to stay there after the border was shut down because it was too dangerous to return to the capital.

Del Rosario said the Philippine Embassy in Tripoli had chartered a ship for the evacuation of the Filipino migrant workers.

The ship, which could carry up to 1,500 people, is set to sail from Malta in two days to pick up Filipinos from the ports of Benghazi, Misrata and possibly Tripoli, Del Rosario said.

He said the owner of a ship engaged by the embassy earlier had backed out.

“Fortunately we were able to finalize a contract verbally with [another shipowner in] Malta. The chartered ship will leave in a couple of days,” Del Rosario said.

On Tunisia’s Djerbe Island on Friday, Del Rosario met some of the 95 Filipinos who crossed the border at Ras Ajdir on Thursday.

The Filipinos were bussed to Djerbe, more than 130 kilometers from Ras Ajdir, and were put up at a hostel while waiting for their flight home, scheduled for today.

Del Rosario, who is also coming home today, assured the Filipinos remaining in Libya of government assistance in leaving the North African country that is fast descending into civil war, with rival militias fighting for control of key population centers. 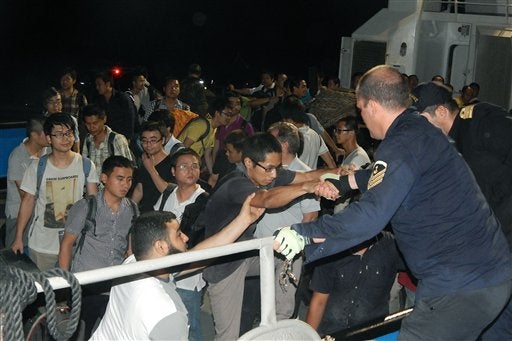 The DFA issued an order for “mandatory” evacuation of all Filipinos in Libya last month after the beheading of a Filipino construction worker abducted by unknown suspects in the eastern city of Benghazi.

That killing was followed by the abduction and gang-rape of a Filipino nurse in Tripoli on Wednesday.

Hundreds of Filipino doctors and nurses in Tripoli’s Medical Center walked out in protest at the savage attack on their colleague, unleashing anarchy in the hospital.

A hospital official said families were forced to transfer sick relatives to private clinics because of the walkout.

Libyan health authorities feared the order for the evacuation of all Filipinos could paralyze hospitals and lead to a “total collapse” of Libya’s healthcare system.

More than 3,000 health workers from the Philippines, making up 60 percent of Libya’s hospital staff, could leave along with workers from India, who account for another 20 percent.

But the DFA admits that evacuating 13,000 Filipino migrant workers in Libya is a “challenge,” as thousands of them refuse to leave despite the dangers.

Jose said only a fraction had fled since the government’s initial warning for Filipinos to leave Libya was issued two months ago.

“We’ve had that advisory (for Filipinos to leave Libya) for two months, but less than a thousand have come home. Can you just imagine the challenge we’re facing?” Jose said.

The Philippines previously launched a mass evacuation of its workers in Libya in 2011, when most of the 30,000 Filipinos there left during the violent uprising that led to the fall of dictator Moammar Gadhafi.

Jose said about 4,500 returned to the Philippines in repatriation flights paid for by the government at that time.

Others were evacuated by their employers and international aid organizations.

But about 1,600 Filipinos, mostly doctors and nurses, remained in Libya throughout the 2011 upheaval, according to government data.

Their numbers later increased after the Philippines lifted its travel ban for workers to go to Libya in March 2012.

That ban was reimposed on May 30 this year, when the government also strongly advised all Filipinos already in the country to leave, using their own resources, as security conditions deteriorated.

The mandatory evacuation announced last month puts the onus on bringing the workers home on the government.  With reports from AFP and AP

Metal, believed to be from commercial plane, found on Eastern Samar beach