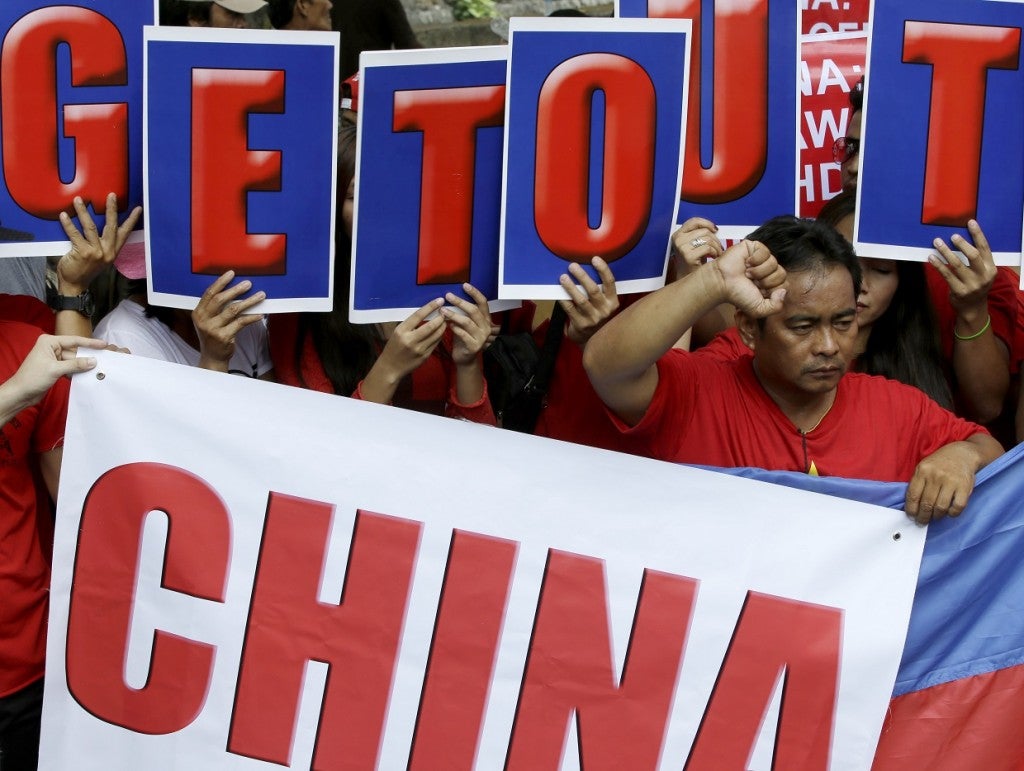 Vietnamese expatriates and Filipinos display placards as they join together in a rally in front of the Chinese Consulate in Makati City on May 16. AP

WASHINGTON—The US State Department proposed Friday that Asian nations not build new outposts or expand existing ones in the South China Sea to help lower the risk of a conflict as tensions mount in its resource-rich waters.

This as the Senate passed late Thursday a bipartisan resolution reaffirming US defense treaty obligations with the Philippines and Japan — both are locked in a separate dispute with China over unoccupied islands in Asian seas.

The US Senate urged all nations to refrain from “destabilizing activities” and expressed US commitment to freedom of navigation in the Asia-Pacific.

Speaking at a Washington think tank, senior State Department official Michael Fuchs voiced great concern over the “increasingly tenuous situation” as an assertive China and five of its smaller neighbors vie for control of tiny islands and reefs in waters with plentiful fisheries and potential hydrocarbon reserves.

Fuchs said no claimant was solely responsible for the tensions, but criticized a pattern of “provocative” behavior by China.

He detailed a proposal for a voluntary freeze on activities which escalate tensions, to flesh out a 2002 declaration by China and the Southeast Asian bloc that calls for self-restraint in the South China Sea, which the Philippines now officially calls as West Philippine Sea. The US is expected to push the proposal at a gathering of Asian foreign ministers in Myanmar next month.

Fuchs said the claimants themselves would need to agree on the terms, but suggested stopping establishment of new outposts and any construction and land reclamation that would fundamentally change existing outposts. He also proposed that one claimant should not stop another from continuing long-standing economic activities in disputed areas.

Simmering tensions in the South China Sea have spiked since early May, when China deployed a large oil rig close to the disputed Paracel islands, triggering a continuing standoff with Vietnam. In mid-June, the Philippines said it would call for a region-wide moratorium on construction after China began building a school on the largest island in the Paracels to serve the children of military personnel, two years after it established a city there to administer the vast area it claims.

China rejected the suggestion. It says its maritime and territorial claims have an historical basis, and it is reluctant to embrace regional solutions for what it views as bilateral disputes. Other claimants are Brunei, Malaysia and Taiwan.

Fuchs said the proposed freeze on activities could help dial down tensions and smooth the way for negotiations on a legally binding — and long-delayed — code of conduct.

But China objects to what it considers the US interference in the matter. Washington, which plans $156 million in assistance for Southeast Asian nations for building their maritime capabilities over the next two years, maintains it is impartial in the sovereignty disputes but has an interest in their peaceful resolution.

The bipartisan Senate resolution passed late Thursday calls for the peaceful resolution of territorial and maritime disputes, and reaffirms US defense treaty obligations with the Philippines and Japan — which is locked in a separate dispute with China over unoccupied islands in the East China Sea, which lies further north.