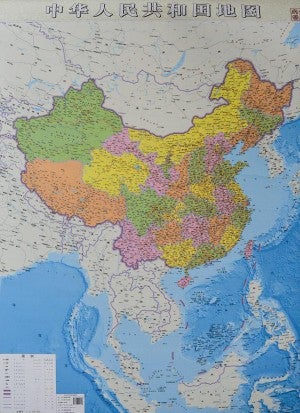 BEIJING—China’s efforts to counter the United States’ “pivot to Asia” and raise its own influence on the continent are complicated by territorial disputes, mostly at sea but also along its land border. Many of the disputes have been simmering for decades, although some have heated up in recent years. Here is a summary of Beijing’s border disputes:

TAIWAN: Taiwan itself is claimed by Beijing as a part of Chinese territory, and Beijing has vowed to bring it under control, by force if necessary. This claim has been the principal driver of the modernization of China’s People’s Liberation Army since the end of the Cold War. Taiwan was incorporated into the Qing Dynasty in the 17th century, then was turned into a province in 1885. It was ceded to Japan in perpetuity in 1895 then handed over to the Republic of China in 1945. In all, it’s been governed from the mainland for just five of the last 119 years. Since 2008, Beijing has set aside its threats against Taiwan as part of building economic ties with the island in hopes of eventual reunification, though it has not given up its sovereignty claim.

JAPAN: Beijing’s dispute with Tokyo is by far its most bitter, centering on a chain of islands the Chinese call Diaoyu and Japanese call Senkaku. The uninhabited islands are 410 kilometers (250 miles) west of Okinawa and 186 kilometers (116 miles) northeast of Taiwan’s main island. The largest, Diaoyu Dao, or Uotsuri-shima, covers only 4.32 square kilometers (1.6 square miles) while the others are mere specks. China says they were stolen by Japan in 1895 and should have been returned at the end of World War II. Taiwan, which calls them Diaoyutai, also claims the islands but has worked out an arrangement with Japan guaranteeing its fishermen access to the area, and it rejects any notion of joining with Beijing on the matter. China and Japan are also at odds over exploitation of East China Sea gas deposits, while Tokyo was the primary target of China’s air defense identification zone (ADIZ) announced last year.

SOUTH CHINA SEA: The South China Sea, also believed to contain significant petroleum reserves, is the most complex of China’s border disputes. China claims virtually the entire 425,000 square kilometers (164,000 square miles) of sea and its 750-plus islands, rocks and everything else above water, although it remains vague and inconsistent about what legal definitions apply. At times, it refers to them as territorial waters, at other times not. It is also vague about the exact limits of its famous “nine-dashed line” with which it demarcates its claim. Taiwan, whose Nationalist government invented the dashes in 1947, makes an identical claim but isn’t an active participant in the current disputes.

The main island groups are the Paracels (controlled by China, which calls them Xisha), the Pratas (Dongsha, controlled by Taiwan) and the Spratlys (called Nansha by China). All six governments sparring over the South China Sea have claims in the Spratlys.

Disputes between China and Vietnam focus on the Paracel islands, two of which Vietnam had occupied until being violently expelled by Chinese forces in 1974. China said the action was in self-defense. China and Vietnam also clashed in the Spratlys in 1988, leaving China in control of a half-dozen reefs and outcroppings.

The Philippines and China have competing claims over Second Thomas Shoal, Scarborough Shoal, Mischief Reef and related islands in the Spratlys. Unlike Vietnam, which has a capable, submarine-equipped navy, the Philippines has little more than surplus World War II-era US ships and not a single fighter jet.

Indonesia and China have no formal dispute, though in 2010, Indonesia’s navy came close to a shooting encounter with Chinese vessels that had entered waters off Jakarta’s Natuna island gas field near the sea. Indonesian officials said the incident was an intrusion by fishermen and not part of a territorial dispute.

Aside from ongoing territorial standoffs with Vietnam and the Philippines in two disputed areas, China has been adding sand to reefs and rocks in the Spratlys, apparently so it can build military installations on the contested islands. There is speculation that China may also announce an air defense identification zone over the South China Sea as part of its efforts to keep US surveillance planes away from its southern coast.

INDIA: China has an active territorial dispute with India along their 6,400-kilometer (4,000-mile) border high in the Himalayas. Most prominently, China claims the Indian province of Arunachal Pradesh (83,743 square kilometers, 32,333 square miles) in the east, while India says China is illegally occupying Aksai Chin (37,244 square kilometers, 14,380 square miles) bordering Jammu and Kashmir in the east. No shots have been fired across the border since a brief but bloody frontier war in 1962. They agreed to a line of actual control in 1996 and began talks on settling the dispute.

RUSSIA/CENTRAL ASIA: At the end of the Cold War, China still had significant border disputes with Russia and former Soviet Central Asia. All have been settled amicably, although some Chinese have pointed out that Russia currently controls territory once under Chinese rule, including the island of Sakhalin.

MINOR DISPUTES: China has a minor border dispute with Bhutan and the sides have no diplomatic ties. It also has an obscure dispute with South Korea over a submerged rock that both claim. South Korea controls the feature, known variously as Socotra Rock, Leodo and Suyanjiao, and has built an ocean research station and helipad over it.