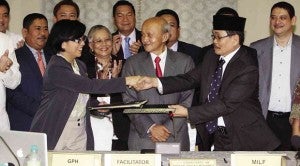 Both panels on Friday ended four days of talks on the draft Bangsamoro basic law (BBL) in Kuala Lumpur with “modest progress” and agreed to meet again in Manila.

They flew to Kuala Lumpur early this week to thresh out differences that had delayed for three months the submission of the draft BBL to Congress.

“They achieved modest progress and identified consensus language in the light of signed agreements,” the panels said in a joint statement released by the Office of the Presidential Adviser on the Peace Process.

The meeting was an opportunity for both panels to “clarify misperceptions and affirm the intent and sincerity” of the parties to abide by the signed agreements, they said.

The negotiators from both parties agreed to continue working together to craft a “mutually acceptable” draft law, they said.

“They agreed to continue discussions on specific concerns in Manila within the next few days,” the panels said, but did not mention the concerns.

The idea, they said, was to ensure the draft law would be submitted to Congress at the soonest possible time.

Presidential spokesperson Edwin Lacierda had said the document would be submitted to Congress after President Benigno Aquino III delivers his State of the Nation Address on July 28.

The Transition Commission, which submitted the draft BBL to Malacañang on April 14, apparently asked the negotiating panels to address issues raised by a presidential legal team reviewing the BBL.

Chief government negotiator Miriam Coronel-Ferrer had expressed optimism the workshop in Kuala Lumpur would “help sort out the grey zones.”

Malacañang returned the draft BBL to the Transition Commission with many comments and revisions.

President Aquino had expressed confidence that despite the delayed submission, Congress was on track in approving it by yearend in time for its ratification the following year.

“I have to work with the coequal branch, but I can assure the Filipino people that we will be exerting all efforts to ensure that this measure is passed in a timely manner because the dream still is to give the new Bangsamoro government time to demonstrate its abilities, and the time that they need as a minimum is a year and six months. So, we’re hoping that all the steps will be done that they can sit already in office by January of 2015,” he said.

The signing of the peace agreement in March this year came after 17 years of on-and-off negotiations between the government and the secessionist group that splintered from the Moro National Liberation Front after the 1996 peace agreement.

In 2008, the Arroyo administration hacked out a deal expanding the Bangsamoro territory, but the Supreme Court ruled the deal (memorandum of agreement on ancestral domain) unconstitutional.

What is the Comprehensive Agreement on the Bangsamoro?