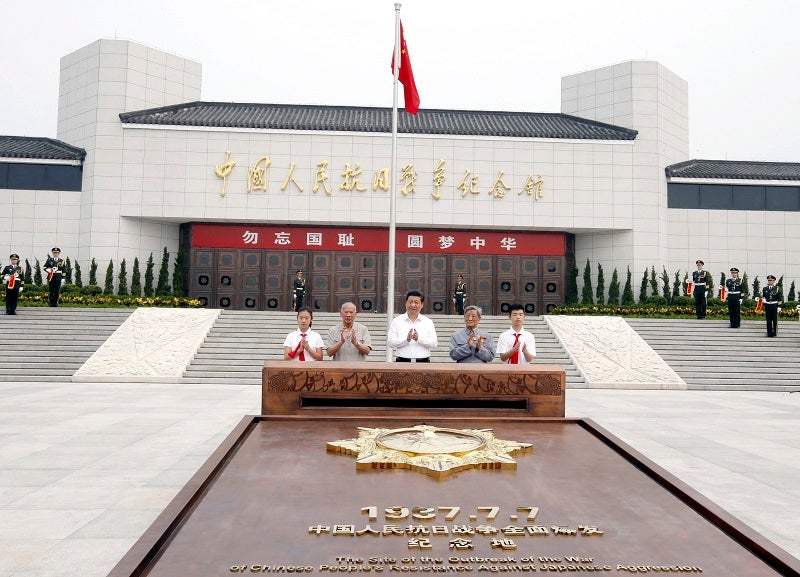 In this July 7, 2014 photo released by China’s Xinhua News Agency, Chinese President Xi Jinping unveils a sculpture commemorating the start of a war with Japan with old soldiers and children during a ceremony to mark the 77th anniversary of the war, in Beijing, China. Despite Xi’s depiction of China as a “peaceful, amiable and civilized lion,” the country’s moves have so far only set off alarms across the region and pushed other Asian countries to seek backup from Washington. AP

BEIJING— Nearly three decades after Chinese leader Deng Xiaoping famously instructed his diplomats to “be good at maintaining a low profile and never claim leadership,” a new generation of rulers has made it clear that they’re ready to shed the humility and show off their country’s rising military and political power.

From Southeast Asian waters that may hold billions of barrels of oil to uninhabited islands in the East China Sea, China has stepped into territorial disputes with neighbors including Japan, South Korea and the Philippines — and in some cases, some would say, provoked them. At the same time, Beijing has pledged to build what it says will be a new security framework for Asia, replacing US-dominated alliances that have defined the post-World War II period.

“We should work for a new architecture of Asia-Pacific security cooperation that is open, transparent and equality-based,” Chinese President Xi Jinping told dignitaries from India and Myanmar last month. “The notion of dominating international affairs belongs to a different age and such an attempt is doomed to failure.”

Yet despite Xi’s depiction of China as a “peaceful, amiable and civilized lion,” the country’s moves have so far set off alarms across the region and pushed other Asian countries to seek backup from Washington. Promises to build a self-governing Asian community of nations have amounted to little more than words, while the reality has been what many see as Chinese bullying.

Xi, who has shown similar boldness at home since rising to power last year, is at the heart of the new strategy. For the first time in decades, Chinese officials are emphasizing an “active” foreign policy that sets the regional agenda while touting China’s maritime strength.

“This is a very strong theme with him,” said Christopher Johnson, a former China analyst with the CIA who’s now chairman of China studies at the US think tank the Center for Strategic and International Studies. “It’s bound up in his view of himself as not only the savior of the party but kind of an instrument of history, with the goal being this great rejuvenation of the Chinese nation.”

That means showing “strong willingness to counter US influence in the region,” said Alice Ekman, head of China research at the French Institute of International Relations. Chinese officials have been especially critical of the Obama administration’s touted “pivot to Asia,” with diplomats openly mocking America’s ability to police the region.

“We are seeing at several levels — economic, institutional, political, security — a reinforced competition between China and the US in the region since Xi’s arrival.” Ekman said at a recent lecture in Beijing on China’s foreign policy.

She said China’s growing dominance of the global economy, and its neighbors’ dependence on Chinese trade, is central to the strategy. “China’s moves in the region are based on the following hypothesis: Time moves in favor of China as long as the economic attractiveness of China will reinforce the balance of power in favor of China,” she said.

Xi’s immediate goal is to give his country’s forces tactical military superiority within what is known as the first island chain off the country’s shores, from Japan down to Indonesia, Johnson said.

In May, Chinese officials sent an oil rig into parts of the South China Sea claimed by both China and Vietnam, setting off repeated confrontations between the two countries’ ships and sparking anti-Chinese riots in Vietnam. In the nearby Spratly archipelago, the Chinese have been adding sand to reefs and rocks so they can build military installations despite claims to the outcroppings by both Vietnam and the Philippines.

Farther north, China provoked rebuke from Japan, South Korea and the US in November after declaring an air defense identification zone, which requires foreign planes to identify themselves to Chinese forces across much of the East China Sea. China and Japan are disputing control of a scattering of rocky islands there, and Japan protested after Chinese fighter jets flew close to Japanese surveillance planes observing a joint China-Russia naval drill in May.

China is also locked in longstanding territorial disputes with India along its southern border and has committed itself to defending with military force if necessary what it calls its core interests — chief among them, reuniting with the self-governing island of Taiwan, which Beijing claims, and holding on to Tibet.

China has appeared to be more active in defending territorial claims than it has been in pursuing a new alliance of Asian countries. At a China-hosted summit in May of some four dozen countries and international groups, Xi touted what he said would be a new Asian security network that would exclude the US, but he left the meeting with few solid steps to actually building such a framework.

Australian Cabinet minister Malcolm Turnbull said China has found itself largely alone, at least diplomatically, as it shows its teeth to the region.

“It has really no allies in the region, apart from North Korea,” Turnbull was quoted as saying at a recent security and economic leadership conference. “And the consequence has been how China’s neighbors are drawing closer to the United States than ever before.”

With tensions high over China, US President Barack Obama paid high-profile visits to Japan, South Korea, Malaysia and the Philippines in April, where he reassured governments that the US would honor agreements to defend them.

Japanese leaders took matters into their own hands last week when they reinterpreted their pacifist constitution to let them expand the use of the country’s military to defend its allies. The move strengthens Japan’s alliance with the US but also opens the door to new alliances with like-minded Asian countries.

“In the South China Sea, I think Chinese leaders have one purpose: They want to do as much damage as possible to US credibility,” said Huang Jing, a China expert at Singapore National University’s Lee Kuan Yew School of Public Policy. “China understands that if China appears soft, there’ll be no end of it, so China will appear tough and will not make compromises … and (China believes) the US will not come to help when push comes to shove.”

In capitals across Asia, he said, China is forcing governments to make a difficult choice: Will they bet on a future dominated by a newly confident China or one based on longtime US assurances?