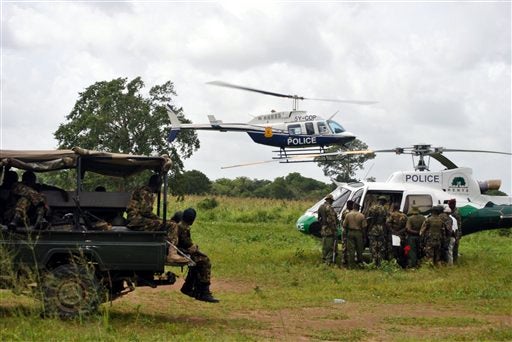 Kenyan police helicopters arrive at Pandanguo, Kenya, Friday. A local official says armed gunmen attacked a Kenyan coastal village, the latest of a series of attacks that have killed more than 80 people and displaced thousands. AP

MANILA, Philippines—Citing the rapidly deteriorating security situation in Kenya, the Department of Foreign Affairs (DFA) on Saturday has banned the deployment of new Filipino workers to the East African country.

“No new deployment of workers is allowed with the exception of workers in the United Nations agencies in Kenya,” the DFA said in a statement as it raised alert level 2 or restriction phase in Kenya.

Under Alert Level 2, Filipinos are advised to restrict movement and avoid unnecessary travel and crowded places, it added.

Filipinos in Kenya are encouraged to contact the Philippine Embassy in Nairobi for instructions.

Kenya has witnessed a notable increase in attacks since deploying troops in October 2011 to fight al-Shabab militants.

Al-Shabab claimed responsibility for a deadly attack last month on the town of Mpeketoni on the Kenyan coast and another attack the following day on a nearby village. Kenyan President Uhuru Kenyatta and the interior minister have blamed local political networks for those attacks — assertions that have been met with skepticism.
There are some 440 Filipinos in Kenya, most of whom are residing in the capital Nairobi.  With Associated Press

ADVERTISEMENT
Read Next
US Senate reaffirms commitment to defend PH, Japan
EDITORS' PICK
Quarantine violations still punishable despite deleted provisions in ‘Bayanihan 2’ – Bato dela Rosa
‘Puno na lahat:’ Metro workers brave lack of public transport, rains on Day 1 of GCQ
Leveling up your ‘lutong bahay’ with the kitchen companion you never knew you needed
Someone from the Philippines can become $356 Million richer this Tuesday
BFP raises general alarm over Mandaluyong fire
Cherry Mobile teams up with Cloud Panda PH, launches online store
MOST READ
‘If I had not been SolGen, I will make you eat your words,’ Calida tells Coco Martin
Quarantine passes no longer required under GCQ, but curfew remains
5 car dealership outlets shutting down
BFP raises general alarm over Mandaluyong fire
Don't miss out on the latest news and information.