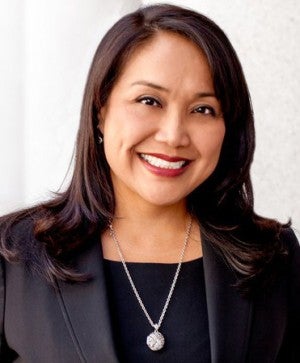 LOS ANGELES – A female deputy district attorney prosecuting the most violent gang-related crimes in Los Angeles County – and whose father was an anti-Marcos activist – has become the first elected Filipino-American judge in the LA Superior Court.

Teresa P. Magno, 43, was officially declared as judge-elect of the LA Superior Court – the largest trial court in the United States – after the Registrar’s Office certified the election results on Monday (Tuesday in Manila). She will begin her term in January 2015.

“There is no doubt in my mind that Ms. Magno could hit the ground running, said Judge David Milton, Magno’s predecessor. “She has the experience, intellect, temperament, sense of responsibility and perspective to set aside the prosecutor’s hat and don the black robe.”

Milton retired February this year and endorsed Magno, who ran last month against Songhai Armstead for LA Superior Court Office No. 97, the seat vacated by Milton.

Born and raised in the Philippines, Magno migrated to the US in 1987 when she was 16 years old.

Magno became a student leader at the University of California Los Angeles, where she pursued her undergraduate and law degrees. She was president of her graduating class in law school.

“Teresa was definitely one of our most gifted, dynamic leaders on campus,” recalled Pulido, the first Fil-Am mayor of Cerritos who recently led the first Philippine Independence Day celebration in the city.

Pulido and Magno served together on the Board of the UCLA Samahang Pilipino. As UCLA student body president, Pulido said he appointed Magno to the university’s Communications Board to oversee several publications and the campus radio station.

In an interview with the Asian Journal last year, Magno said her father was an anti-Marcos activist and that a colleague of her father became one of the victims of the extra-judicial killings under the Marcos regime. Her father’s experience motivated her to fight for justice, Magno said.

As a gang homicide prosecutor in the Hardcore Gang Division of the District Attorney’s Office, Magno prosecuted hundreds of serious felonies and handled 41 gang-related murder cases.

She has been recognized by advocacy groups, such as the Justice for Homicide Victims, for her staunch commitment to help crime victims.

“Teresa’s experience as a deputy district attorney prosecuting the most violent offenders as well as her work as a victim’s advocate has given her the knowledge and fortitude to make the right and fair decisions as a member of the bench,” said Erick Lee, president of the Gardena Police Officers’ Association, one of several organizations that endorsed Magno’s candidacy.

Read Next
Teenage solo flyer seeks to set record, raise funds
EDITORS' PICK
A laptop that maximizes your WiFi so you can maximize your productivity
Why Tagle is a leading papal contender
In Borongan, nuns play hoops (not mahjong)
Powered by style, innovation and passion
House energy committee chair Arroyo bats for cheap electricity
KWF has no power to ban, censor written works – Lagman
MOST READ
Why Tagle is a leading papal contender
SRA officials should resign after ‘illegal sugar order’ – Zubiri
Arjo Atayde reveals proposal to Maine Mendoza was ‘more than a year’ in the making
Gilas gets solid core with Clarkson, Sotto planing in
Don't miss out on the latest news and information.