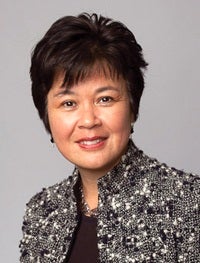 By a 91-0 vote Thursday (Friday in Manila), the United States Senate confirmed trial lawyer Lorna Schofield, who was nominated by US President Barack Obama and Sen. Chuck Schumer of New York in April, as a federal district court judge for the Southern District of New York.

Article III judges are nominated by the President, confirmed by the Senate and appointed to lifetime tenure.

Schofield, 56, is the daughter of a Filipino woman who immigrated to the United States during the post-World War II reconstruction of the Philippines.

Schofield went to New York University (NYU) Law School, where she was a Pomeroy scholar and became editor of the NYU Law Review.

She worked at Debevoise & Plimpton LLP as a litigation partner for nearly 20 years. In 1991, she became the firm’s first minority partner.

Schofield shares a place in history with Judge Alfred Laureta, a Filipino-American who served as judge for the District of the Northern Mariana Islands from 1978 to 1988.

Although technically federal judges, those appointed to the District of Northern Mariana Islands are not lifetime tenure Article III judges but 10-year-term judges under Article I of the US Constitution, according to the Congressional Asian Pacific American Caucus (Capac).

“Ms. Schofield’s confirmation by the Senate is a historic moment not only for our community but [also] for the entire nation,” National Federation of Filipino American Associations (NaFFAA) national chair Ed Navarra said in a statement.

“Given that Asian Americans are significantly underrepresented in the federal judiciary, Ms. Schofield’s addition [to the bench] will greatly enhance the judiciary’s diversity,” he said.

“[The United States Senate’s] laudable action is a demonstration of their continued commitment to nominate well-qualified and diverse candidates to the federal bench,” said Rozita Lee, former NaFFAA national vice chair and a member of the White House Commission on Asian Pacific American Islanders.

“We are elated with her confirmation and our community is very proud to see a Filipino-American achieve this honor and distinction,” Lee said.

KAYA national cochair Jason T. Lagria said Schofield’s confirmation was “an inspirational story that shows there is no limit to what our community can achieve through perseverance and hard work.”

Lagria said the New York metropolitan area had the fourth largest Filipino-American population in the United States, “so it is encouraging to see our judiciary reflect the population it serves.”

“This is definitely a reflection of continued commitment from our country’s leadership,” said Ray Buenaventura, mayor of Daly City and honorary KAYA board adviser.

“[Schofield] will be an inspiration for the legal profession, especially those from minority groups,” said lawyer and community leader Arnedo Valera, executive director of the Washington-based Migrant Heritage Commission.

“Our judiciary and the legal system as a whole is best served when the judges belonging to different ethnicities are recognized and appointed to the bench,” Valera said.

Schofield also served as an assistant US attorney in the criminal division of the Southern District of New York. She became the first Asian-American Pacific Islander (AAPI) to chair the Litigation Section of the American Bar Association. The National Law Journal named her one of the nation’s 50 most influential minority lawyers.

Schofield and Judge Kiyo Matsumoto of the Eastern District of New York are the only judges of Asian descent to serve on the federal district courts of New York.

“It heartens me to know that the judiciary, the branch of government dedicated to the interpretation of our most important cornerstone–the Constitution–is becoming more reflective of the dynamism and diversity of our nation,” said Congresswoman Judy Chu, Capac chair.

Congressman Mike Honda, Capac chair emeritus, said Schofield’s confirmation is not only a victory for the people of New York and the nation as a whole but also a “giant step toward a more equitable representation of Asian-Americans and Pacific Islanders on the federal bench.”

“Ms. Schofield has broken many barriers throughout her career, and today’s confirmation symbolizes a judiciary that better mirrors the nation it serves,” Honda said.