• He is a practicing attorney with 20 years of trial experience 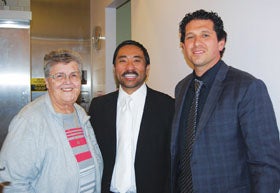 If elected by voters on June 3, Buenaventura would become the first Filipino-American judge to serve on the county’s Superior Court bench.

Surrounded by family, friends and colleagues, the practicing attorney with over 20 years of trial experience told the room full of supporters that his time as a public servant has been fulfilling, and that he hopes to be elected on a campaign platform of integrity, full disclosure, and the judicial experience necessary to hit the ground running.

“We feel that he’s going to be fair to everyone that is in our community,” said Daly City Vice-Mayor Carol Klatt, who was part of the event’s host committee.

“I’ve worked with Rey the three years on the city council and he’s a very fair person, he will listen to all of the facts, he will study the facts and he will make his judgment,” Klatt added.

Along with Klatt, the other members of the host committee for the evening’s event were Daly City Mayor David Canepa and recently retired Treasurer Tony Zidich.

General consultant Mitchell Oster, who serves as the recording secretary of the Democratic Central Committee of San Mateo County, will assume the role as campaign manager.

As for the challenges that lie ahead, Oster pointed to what he called a “down-ballot election,” where one out of every four county voters ends up ignoring the judicial election.

“That’s always a challenge, just raising awareness about the importance of the judicial offices and judicial candidates,” Oster said.

Many of the local civic and community leaders assembled at the event time and again talked about the high moral character of Buenaventura’s; in particular, his strong work ethic and the respect he has for the judicial process.

As a trial lawyer and a law professor, he has a professed passion and the utmost respect for the judicial process — rules of evidence, criminal law and criminal procedure.

On behalf of a number of county bar associations, Buenaventura also has taught fellow attorneys the ABCs of “technology in the courtroom.”

If elected, Oster believes that the goal of his candidate “is to try to bring a kind of fairness to the judicial bench as a whole body.”

“It’s not enough for the judge to just be the judge of their own courtroom,” he said. “Judges serve as a part of a team, the entire judiciary for the county and they play an important role in setting policy and its practices and making the whole system work for the whole county. That’s a part of the job that not a lot of people know about. They just see them in robes and they see them in the courtroom and on TV, but that’s actually only part of the job.”

Oster added: “In addition to the important responsibilities of working in the courtroom as the best judge you can be and understanding the law and grappling with the law, and making sure that it’s administered fairly, he really has an eye towards some of the stuff, the backend stuff. Again, administratively, as part of the court system.”

As an immigrant and someone raised as a child in another country, Buenaventura (who came to the U.S. at the age of nine) learned the importance of family from both his mother and father, who worked as a banker.