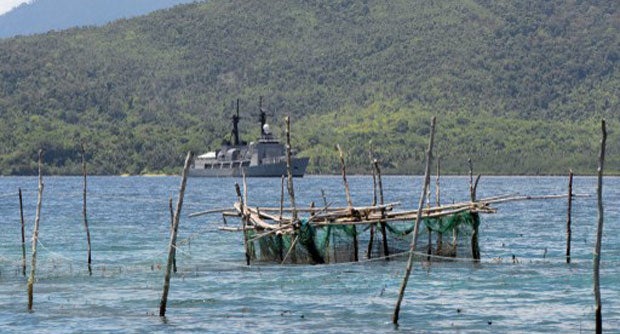 This photo taken on June 7, 2014 shows a fish cage in the water as the Philippine Navy frigate BRP Ramon Alcaraz (in background) sits anchored at the mouth of the South China Sea in Ulugan Bay off Puerto Princesa on Palawan island. Ulugan Bay, with a coastline partly concealed by thick mangrove forests, is at the center of the Philippine military’s efforts to shore up the defense of contested South China Sea islands and waters. AFP

ULUGAN BAY, Philippines — As fears grow that China is on an aggressive South China Sea territorial grab, a sleepy Philippine village is being transformed into a major naval base that may host US warships.

Ulugan Bay, a small, picturesque cove encircled by thick mangroves, has suddenly become a vital part of the Philippine military’s efforts to shore up its defense of contested South China Sea islands and waters.

“This is the frontline of our territorial defense operations in the Kalayaan island group,” President Benigno Aquino declared last month as he inspected the progress of a recently announced upgrade of a tiny naval station on the bay.

Ulugan is on the west coast of the large western Philippine island of Palawan, only 160 kilometres (100 miles) from a small group of islands and islets within the Spratly archipelago known locally as the Kalayaan group.

The Spratlys are among the most prized assets in the decades-long but increasingly hostile struggle for control of parts of the South China Sea.

The sea has such importance because roughly half the world’s shipping trade passes through it, while it is believed to contain enormous deposits of natural gas and has rich fishing grounds.

China and Taiwan say they have sovereign rights to nearly all of the sea, conflicting with the claims of the Philippines, Vietnam, Malaysia and Brunei to areas closer to their coasts.

The Philippines and Vietnam have expressed growing alarm in recent years at China’s increasingly assertive tactics to stake its claims.

Most recently, the Philippines has accused China of reclaiming land at tiny reefs in the Spratlys to in effect create artificial islands that may be used to build air strips and other military installations.

In direct response to the fears over China, the Philippines has sought help from longtime ally the United States to bolster its poorly equipped armed forces with new hardware and training.

The Philippines and the United States also signed a new security pact when US President Barack Obama visited Manila in April that will soon allow a much greater American military presence on Filipino soil, including on expanded bases.

At Ulugan Bay, there is currently just a tiny naval station that serves as the command center for the Filipino military unit responsible for safeguarding its South China Sea waters.

A small pier stands at the bay’s most prized asset, a deep inlet called Oyster Bay with rich fishing grounds that help sustain the 1,700 residents of the nearby village of Macarascas.

As part of the upgrade, a much bigger pier, harbor and support facilities are being built to serve as a base for the navy’s largest vessels, including two ex-US frigates acquired since 2011.

Aquino said the upgrade would also allow the navy to monitor ships by radar and conduct maritime surveillance through a satellite-based system.

In effect, Aquino said it would give the Philippines a greater ability to survey and defend what it says are its waters of the South China Sea.

However just P500 million ($11.4 million) is being spent on the Ulugan upgrade and analysts say the Philippines will not come close to having the capabilities to deter China, which spent $119.5 billion on its military last year.

A potential game changer, however, could be the addition of American troops and hardware, along with extra US money to further expand the facility.

Under the “enhanced defense cooperation agreement” signed between the treaty allies in April, US forces will have access to five Philippine military bases, allowing them to build facilities and rotate through thousands of troops.

It will also allow the United States to deploy more aircraft, ships and equipment to these bases.

The Philippines has so far publicly offered the United States renewed access to Subic Bay, a former US naval base about 100 kilometers north of Manila that also projects onto the South China Sea.

It has not yet said Ulugan Bay will be used, and an announcement on which five bases have been chosen is not expected before October.

But there are signs that Ulugan Bay — which is more than 500 kilometers southwest of Manila and far closer to the Spratlys hotspot than Subic — will be chosen.

Macarascas residents told AFP the US military had already built a gymnasium, a multi-purpose building and a water storage facility, suggesting this was part of their bedding-in with the community.

Philippine military chief General Emmanuel Bautista also said last month the US military should be allowed to use Oyster Bay and help upgrade the facility.

“Perhaps with the (US defense agreement), the improvement of Oyster Bay will be hastened,” Bautista said in an television interview.