Poe recalls immigrant life in US 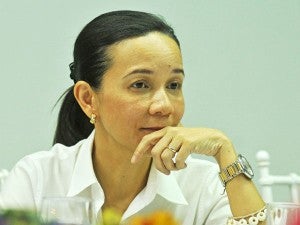 LOS ANGELES—Sen. Grace Poe reminisced about her life as an immigrant in the United States as she addressed Filipino-Americans celebrating the 116th Philippine Independence Day.

“I was once an overseas Filipino like you,” Poe, told hundreds of Fil-Ams attending the annual “Kalayaan Grand Gala” at the Westin LAX Hotel in Los Angeles Saturday evening (Sunday in Manila).

“I know how hard it is to start a new life in a foreign land. Tulad nyo, naranasan ko maging homesick, kung papaano mag drive para sa mga anak, pumasok sa trabaho, magluto, maglinis ng bahay at kung anu-ano pa (Like you, I felt homesick, I had to drive the kids to school, go to work, clean the house and do miscellaneous errands).”

After graduating in 1991 from Boston College with a degree in political science, Poe started her family life with husband Neil Llamanzares in Fairfax, Virginia. They lived a quiet life for 12 years, raising their children – Brian, 21, Hanna, 16, and Nika,10.

Poe, the adopted daughter of movie icon and national artist Fernando Poe, Jr. and wife Susan Roces, said that just like most Filipino immigrants in the US, she decided to move to the US for economic reasons.

“Noong ikasal ako, sabi ko, naku papaano ito? Kahit gaano kaganda ang edukasyon, hindi ka mabibigyan ng sweldo na makakayang bumuhay ng pamilya (When I got married, I asked myself, what am I supposed to do? Even the best education can’t get you a salary that’s enough to raise a family),” she recalled.

“Nahiya ako sa tatay ko. I felt so embarrassed because I married right after I graduated.”

Poe said she did not want to keep depending on her parents. So when her husband got a job in the US, they decided to live as immigrants in a country where “opportunities are limitless” for those who work hard.

In 1995, when Brian was 2 years old, Poe started to teach at a local preschool, the Montessori School of Cedar Lane. After three years, she left the school to serve as procurement liaison with the United States Geological Survey. In 2001, she joined the CSC Scientific, a manufacturer of scientific equipment. Poe worked there until she returned to the Philippines in 2004, when her father ran and lost in a disputed presidential election. The elder Poe died from a stroke seven months after his electoral loss.

“If not for Hello Garci, I would have lived a quiet life here in the US,” said Poe, referring to the alleged phone conversation between  former President Gloria Macapagal-Arroyo and  then  Commission on Elections commissioner Virgilio Garcillano during the 2004 elections. The call was allegedly about a plot to rig the results of the election in some areas in Mindanao.

“After what happened to my father, I decided to go home to see what I could do to help,” said the senator.

Poe, who emerged No. 1 in the 2013 senatorial election, garnering 20.3 million votes, said she “never expected to receive an overwhelming mandate.”

“We were up against (candidates) with unlimited funds. We had very little. It was hard work,” she said, thanking supporters who propelled her to victory.

“But more important, what helped us was a capital that my father left behind – his good name and reputation as a Filipino who truly cared for his countrymen even if he wasn’t in government service,” said Poe, who celebrated Father’s Day in Los Angeles.

Speaking before Fil-Ams garbed in Filipiniana attire in honor of Independence Day, Poe said the revolution started in 1896 “remains unfinished.”

“For most of our kababayans (compatriots) today, economic independence remains elusive and virtually impossible to gain,” she said. “In fact, it is the quest for economic freedom that drove many of us to migrate to the US.”

During the celebration of the country’s freedom day, Poe also talked about the Freedom of Information (FOI) bill, which she sponsored in the Senate and was recently approved on third and final reading.

“’Pag hindi naaarawan, tutubuan ng mikrobyo” (what is not exposed to sunlight gets infected with germs),” she said, using the sunshine analogy to describe the importance of the FOI in curbing corruption by exposing government transactions to public scrutiny.

The proposed law will give citizens the right to request access to government records, subject to reasonable exceptions.

Poe said 70 countries, including the US, have such a law and it’s about time the oldest democracy in Asia also has one.

When asked by the Inquirer how living in the US shaped her as a person and a public official, Poe replied: “To have independent views, to rely on yourself, non-self entitlement, those I learned here in the US.”

On the perennial question of whether she plans to run for president or vice president in 2016, she said: “I have no plans, but (then) we don’t hold the future entirely in our hands.”

The cultural event commemorating the 116th anniversary of the proclamation of Philippine Independence from Spain on June 12, 1898, was organized by Kalayaan Incorporated, a coalition of community groups headed by Joveno ‘Bing’ De La Vega.